Former Turkish President Abdullah Gul will not run in the swiftly approaching elections, and no other candidate stands much of a chance against President Recep Tayyip Erdogan. 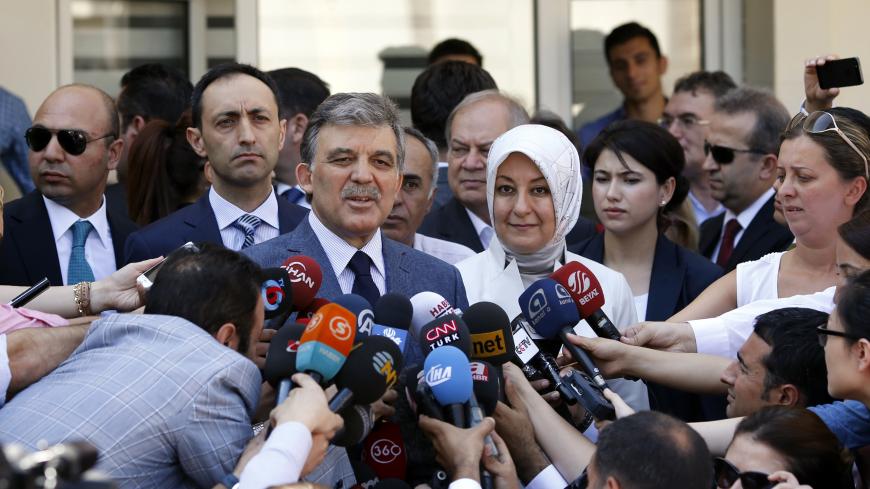 Turkey's then-incumbent President Abdullah Gul and his wife Hayrunnisa Gul talk to the media as they leave a polling station after casting their votes, Ankara, Turkey, Aug. 10, 2014. - REUTERS/Umit Bektas

Hopes that Abdullah Gul, a former president and the sole political figure attributed a credible chance to defeat Turkish strongman Recep Tayyip Erdogan in the snap polls on June 24, will enter the elections have all but died as opposition groups scramble for alternatives.

Gul, a reformist who appeals to conservatives, liberals and Kurds alike, was also expected to steal plenty of Erdogan voters disaffected with his iron grip, a weakening economy and growing reluctance to share the spoils of power.

He was being touted as a joint candidate for the main opposition Republican People’s Party (CHP), the newly formed right-wing nationalist Iyi or Good Party, and the small pro-Islamic Felicity Party. The largest pro-Kurdish bloc, the Peoples' Democratic Party (HDP), would run its own candidate (it announced yesterday that it would field its imprisoned former leader) so as to shield Gul from accusations that he is backed by “terrorists.” Erdogan continues to gratuitously slap the label on the HDP, which has seen thousands of its members jailed since the failed July 2016 coup. But in a second round of balloting, pro-HDP and conservative Kurds, who together account for roughly 18% of voters, would have backed Gul, propelling him to victory. This, anyway, was said to be CHP leader Kemal Kilicdaroglu’s strategy but as of yesterday it lay in tatters.

Iyi Party leader Meral Aksener declared earlier this week that she would not pull out of the race to make room for Gul. And hard-core CHP secularists and left-wingers, probably egged on by other CHP hopefuls, reacted so viscerally to his candidacy because of his Islamic past that the risk-averse Gul reportedly slammed the door shut. Aksener’s ambitions, twinned with secularist delusions that a candidate who does not appeal to conservative pious voters and Kurds stands a chance of victory appear to have all but guaranteed a second term for Erdogan. The CHP will now have to come up with its own candidate by the May 9 official deadline.

Asli Aydintasbas, a senior fellow at the European Council on Foreign Relations, laid out the landscape perfectly in her column for the pro-secular Cumhuriyet newspaper: “There are 60% to 65% nationalist/conservative voters in Turkey. Most of them are biased against the CHP. … That is why the CHP headquarters was seriously weighing Abdullah Gul [as a candidate]. … In all the surveys and simulations Abdullah Gul emerges as the only figure by far who can defeat Tayyip Erdogan in a second round [of balloting].”

As for Aksener, who is banking on a critical mass of tactical votes to keep Erdogan out, she is unlikely to succeed. Aydintasbas wrote that recent polls give her 7%-11% of the popular vote. Even if the CHP were to rally around Aksener, she would need to deliver some kind of pledges to draw Kurds in a second round. But given her record as an interior minister in the 1990s at the height of human rights abuses in the mainly Kurdish southeast and some of the extreme nationalists in her inner circle, would they believe her? And what if Erdogan, a master tactician pulls a last-minute Kurdish rabbit out of his hat? “As of yesterday,” concluded Aydintasbas, “Tayyip Erdogan is a lot more relaxed. His job is a lot easier.”

The opposition’s remaining hope is to snatch the majority away from Erdogan’s ruling Justice and Development Party (AKP) in parliamentary elections that will be held at the same time as the presidential ones. Kilicdaroglu is seeking to get the opposition to agree to form an electoral alliance. But the Iyi Party believes that if it teams up solely with Felicity it can surpass the minimum 10% of the national votes needed to win seats in the chamber. Aksener’s apparent ebullience is fueled in part by lagging enthusiasm in the AKP’s grassroots networks and the conviction that she can siphon off enough votes from Erdogan's electoral ally, the Nationalist Movement Party (MHP), which she broke away from.

“Erdogan used to talk and listen to those people and keep his finger on the local pulse,” said Sefik Cirkin, a former lawmaker and Iyi Party official from Hatay. He told Al-Monitor in a telephone interview, “I speak to AKP colleagues all the time and they feel shut out since Erdogan moved to the palace [in 2014].” In what may be something of an overstatement, Cirkin said, “The party worked only halfheartedly for him in the [2017] referendum" on switching from a parliamentary system to an executive presidency. "This time they will barely lift a finger, if at all.”

Aksener will also need to put enough Iyi Party operatives on winnable parliamentary slates to ensure that they don't defect to the MHP, and that would be harder to pull off in an alliance with the far bigger CHP.

In any event, between continued emergency rule, Erdogan’s stranglehold over the media and new laws that would ease defenses against fraud such as the ballot-box stuffing reported by international election monitors, who may well not be on hand because of the short notice, an opposition victory always seemed something of a pipe dream. Howard Eissenstat, a Turkey researcher at St. Lawrence University and a senior nonresident fellow at the Project on Middle East Democracy, summed up his take in a tweet: “The elections are already rigged. If that isn’t enough, he’ll rig them some more.”