Did Erdogan's men ask ex-president not to run?

Turkish President Recep Tayyip Erdogan and his top brass have not denied reports that he sent his spokesman and the chief of general staff to talk former President Abdullah Gul out of running in the upcoming presidential race. 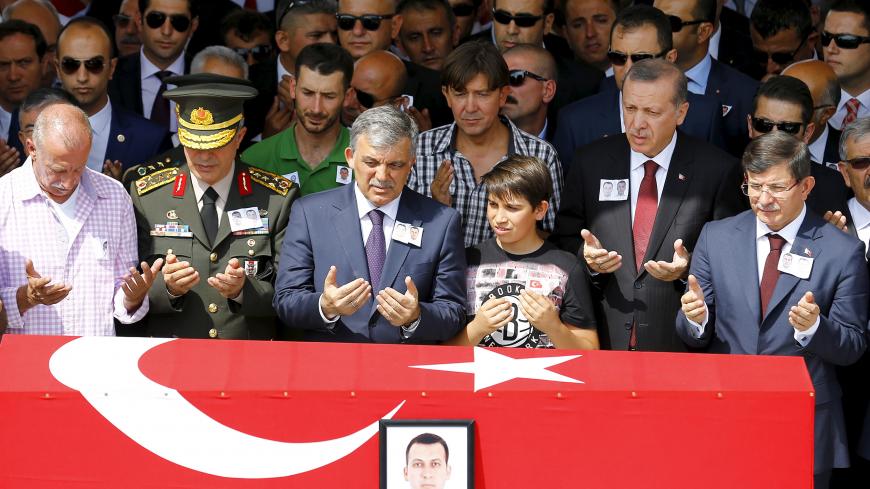 Recep Tayyip Erdogan, Turkey’s president who catapulted to power 15 years ago vowing to abolish army tutelage, has cowed a putative rival into staying out of the June 24 presidential race. He used the country’s top general as his courier, reported the pro-government news organization Haberturk April 26.

The piece claimed that the country’s Chief of General Staff Gen. Hulusi Akar and presidential spokesman Ibrahim Kalin had flown to former president and longtime Erdogan ally Abdullah Gul’s home in Istanbul the day before and had asked him not to run. As the bombshell ripped through the social networks, the story was swiftly taken down. Haberturk’s editor was given the boot. Then on Saturday, Gul declared that he would not be a candidate, ending weeks of fevered conjecture over his plans. Gul explained that he had considered running as a presidential candidate and that the idea had been first floated to him by the small pro-Islamic Saadet or Felicity Party.

In a veiled jab at the shrill objections aired by many within the pro-secular opposition Republican People’s Party (CHP), Gul said had there been widespread consensus within the opposition he would have run. He bemoaned the polarized political landscape, saying, “We are too busy indulging in personal attacks rather than [focusing on] what is good for Turkey.” But with trademark caution, he dodged questions about the mystery visit. And neither the General Staff nor the president’s office has formally rebutted the reports about Akar and Kalin’s alleged 3½-hour meeting with Gul and claims they had landed their helicopter on his lawn.

CHP leader Kemal Kilicdaroglu insisted the story was accurate, saying, “The news is true but journalists are unable to report it. An internet site’s editor posted it and and was fired. No journalist should forget this dramatic situation.”

Gul, a British-trained economist, is a founding member of Erdogan’s Justice and Development Party (AKP) who served briefly as prime minister and then as foreign minister for four years. He was elected president in 2007 amid threats of a takeover by Turkey’s then still powerful generals. His wife’s Islamic-style headscarf became a vehicle for their opposition, with claims that a first lady who sported one posed a threat to Ataturk’s secular vision. It was a milestone in the AKP’s battle against military tutelage.

Gul’s candidacy sharpened the bitter quarrels between viscerally anti-AKP secularists and the more agnostic — some would say naive — liberals who supported the AKP in its early reformist days only to see Erdogan become an even tougher and more durable autocrat than the generals he defanged. Yet, as Turkish historian Karabekir Akkoyunlu noted in a tweet, at this point, “The only question is (was) who has the highest potential to beat Erdogan in 1st or 2nd rounds, based on reliable polls. Everything else is noise at the moment.”

Many argued that Gul was that candidate. Kilicdaroglu had been hoping to field him on a multiparty opposition ticket that would have excluded the main pro-Kurdish party for tactical reasons. But the Kurds were widely expected to back Gul in a runoff and openly hinted as much. Either way, Erdogan saw him as enough of a threat to reportedly mobilize his generals against him. Remarking on the paradox, Nicholas Danforth, a senior policy analyst at the Bipartisan Policy Center, told Al-Monitor, “Erdogan appears to have transformed Turkey from a country where generals intimidate civilian leaders to one where civilian leaders can send generals to intimidate secular rivals.”

With Gul’s candidacy buried, all eyes are trained on the CHP. Who will it nominate and can he or she be any match for Erdogan, who will apparently stop at nothing — fraud is definitely on the menu, critics charge — to prevail? Kilicdaroglu offered some clues last week when he said that any nominee would need to be, among other things, impartial, pacific, all-embracing and have a “success story” to tell. Kilicdaroglu deepened the mystery today, arguing that his party’s candidate did not need to be a member of the CHP and suggested that it was best if they were not. He added that at least 60,000 volunteers were needed to monitor the elections to avert potential ballot stuffing, particularly in rural areas.

What any credible candidate needs to defeat Erdogan, or so the poll numbers say, is to be able to draw pious conservatives and Kurds and inspire enough pro-secularists to cut their beach holidays short and vote in an expected second round scheduled to be held on July 8. Meral Aksener, the leader of the newly formed nationalist Iyi or Good Party and the sole candidate with some real legs, has ruled out any alliance with the Kurds for the parliamentary elections, making it even harder for her to woo any in the presidential race. The Peoples' Democratic Party’s nominee, Selahattin Demirtas, is behind bars facing a sea of thinly evidenced terror charges. Prosecutors have demanded he be sentenced to five years for a speech he made on the occasion of the Kurdish New Year celebrations and he could yet be disqualified from running on legal grounds.