With the elections over, Turkey’s opposition factions are back to fighting among themselves, this time for the leadership of the Republican People’s Party, as calls come in for Kemal Kilicdaroglu to resign. 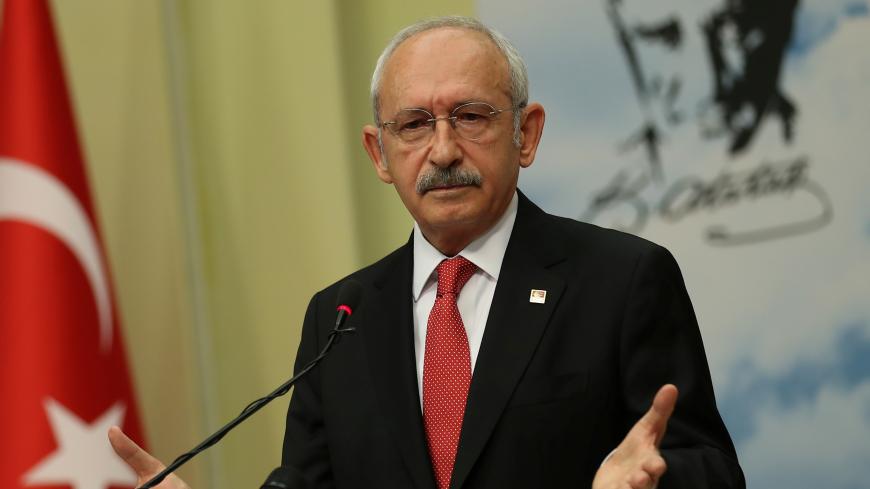 It didn’t take long for Turkey’s perennially squabbling political opposition to revert to type. The battle for the leadership of the pro-secular main opposition Republican People’s Party (CHP) is already shaping up with the current incumbent lobbing mortars at the party’s presidential contender, Muharrem Ince, for his performance in Sunday’s polls. With a straight face, Kemal Kilicdaroglu told a news conference today that with 30.6%, Ince had scored “below expectations,” never mind that the CHP had fared far worse in the parliamentary race with only 22.6%. That was almost 3 percentage points down from the CHP's 25% in the last parliamentary elections in November 2015.

Calls for Kilicdaroglu to resign are mounting over the loss, with rebels pushing for a party congress to elect a new leader. Ince, whose electrifying campaign performance drew support well beyond the CHP’s traditional base, including ethnic Kurds, said he would visit all 81 of Turkey’s provinces to “thank” the people. More likely he will be lobbying the CHP’s grass-roots organizations to help him mount a challenge to Kilicdaroglu. He needs more than half of the delegates’ signatures to force a contest.

An apparently unfazed Kilicdaroglu maintained his party had done well given the undemocratic nature of Sunday’s polls, which were held under stifling emergency rule, dubious electoral laws and covered by a media that is near fully controlled by pro-government corporations. The “only loser” of the election, he declared, was President Recep Tayyip Erdogan’s ruling Justice and Development Party (AKP), which drew 42.5% — seven points less than in 2015 — thereby narrowly losing its majority in the 600-member parliament.

Erdogan scored a full 10 percentage points more than his own party, with nationalist voters helping him clinch victory in a first round of balloting in keeping with the formal pre-electoral alliance struck between Erdogan and far-right Nationalist Movement Party (MHP) leader Devlet Bahceli. The MHP, which was written off by many pundits, maintained its 2015 standing, pulling in 11.6% even though Bahceli barely hit the stump and his former protege and now would-be nemesis Meral Aksener broke away to form her own Iyi (Good) Party. These factors ought to have eaten into the MHP’s votes, but instead, Iyi clinched 10%, effectively doubling the nationalist vote.

The MHP’s success is hard to fathom. One explanation is that the government chose to stuff ballots with MHP votes far from prying eyes in the rural Sunni heartlands. “Bumping up its own [AKP] votes through fraud would have drawn too much attention,” opined a veteran Turkish columnist who declined to be identified for fear of reprisal. But evidence to back this theory has yet to emerge. Another is that amid rising resentment felt toward the estimated 3.5 million Syrian refugees, AKP voters turned to the MHP to register their protest.

Whatever the reason, the nationalists’ strong showing has prompted worries that with Erdogan beholden to them, any hope that he might revert to his old reformist self, say by restarting peace talks with the Kurds, has fully evaporated. The Turkish military is likely the bigger deterrent. However much Erdogan appears to have decisively defanged the once omnipotent generals after the failed 2016 coup, the danger of rogue officers plotting another one may well still lurk, at least in his famously suspicious mind. Remaining tough against Kurdish irredentism is a sure way to maintain the loyalty of Turkey’s nationalist officer corps. “The MHP’s hawkish policies reflect the military’s will,” said Sezgin Tanrikulu, an ethnic Kurdish lawmaker from the CHP.

Against this background, will Ince revisit his own refreshingly liberal stance on the Kurds? His overtures to imprisoned Kurdish presidential contender Selahattin Demirtas together with assertions that the Kurdish problem was a “political one” before the elections ignited hopes that Turkey’s opposition was finally acknowledging the need to accommodate the country’s estimated 16 million Kurds.

He is unlikely to change. Even before his candidacy was announced, Ince had opposed his party’s decision to back an AKP-driven vote in the parliament to strip the immunity of lawmakers being prosecuted for terror crimes. The target was lawmakers from the pro-Kurdish Peoples’ Democratic Party, nine of whom, including Demirtas, are currently in prison. Ince recognizes that growing the CHP means growing its Kurdish vote.

Will Erdogan, with his legendary obsession for polling, feel the same way? The answer depends in part on how much weight electoral politics will still carry under the new executive presidency that was ushered in on Sunday. But in five years, Erdogan will have to face the voters again. In the meantime, the Kurds seem to be the ones most willing to follow his advice to have at least three children, making them the fastest growing demographic in Turkey.