Turkish President Recep Tayyip Erdogan has officially won re-election, though his ruling party missed a parliamentary majority by a hair. 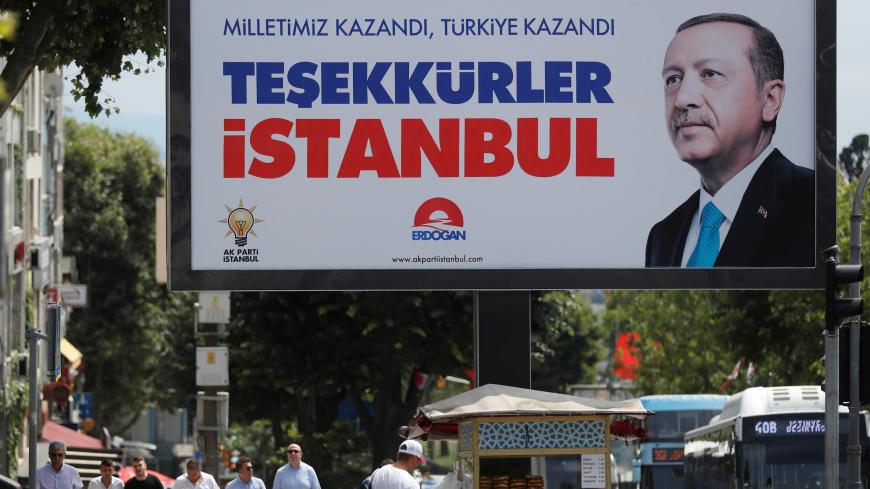 Turkey’s main opposition presidential contender conceded defeat today, effectively forestalling further debate about the legitimacy of Sunday’s presidential and parliamentary elections that were won by incumbent Recep Tayyip Erdogan and his Justice and Development Party (AKP). Thus, a new era formalizing the sweeping powers already exercised by Erdogan under two years of emergency rule is being ushered in unchallenged.

Muharrem Ince, the candidate for the main secular opposition Republican People’s Party (CHP), said at a news conference in Ankara, “I accept the election results.” Alluding to allegations of fraud, Ince said, “Did they steal votes? Yes, they will have. Did they steal millions of votes? No.”

Ince’s statement caps a night of drama fanned by his protracted silence following the announcement of the results, which gave Erdogan 52.6% of the vote and Ince 30.7%.

Reports of ballot stuffing, voter intimidation and other forms of manipulation could not account for the 10 million gap between them, Ince said.

The Organization for Security and Cooperation in Europe, which observed polling nationwide, noted in its preliminary report, “The restrictive legal framework and powers granted under the state of emergency limited fundamental freedoms of assembly and expression, including in the media. Still, citizens demonstrated their commitment to democracy by participating in large numbers in campaign rallies and on election day. … Election day procedures were generally followed, although important legally prescribed steps were often omitted during the counting and tabulation” of ballots. Overall, the report was rather damning, with observers noting they felt unsafe at times, but the government is unlikely to care.

Sezgin Tanrikulu, a CHP lawmaker and globally acclaimed former human rights lawyer, told Al-Monitor, “There was a lot of pressure, particularly in the [mainly Kurdish] southeast. For instance, monitors were denied access to many villages in the area between Kulp and Sasson.” He added, “The elections were marred by fraud, but not won solely on the back of fraud.”

Sunday’s elections caught even the most seasoned analysts by surprise.

While many predicted that with the odds so unjustly stacked in his favor Erdogan would win — if only in a second round — few foresaw how well his electoral ally the far-right Nationalist Action Party (MHP) would do with 11.13% of the vote. The party was thought to have been badly weakened when Meral Aksener, a former interior minister, split away to form her own Iyi or Good Party, which received 10%. The conventional wisdom is that the MHP's share of the vote rose in the southeast due to the heightened presence of members of the security services and support from Kurdish village guards, a state-funded militia established to fight the rebels of the outlawed Kurdistan Workers Party (PKK). Another explanation is that disgruntled AKP voters turned to the MHP, a bizarre form of punishment given that the AKP and the MHP ran in alliance. But the net effect is that with 293 elected deputies in the 600-member legislature, the AKP is eight members short of a majority and will have to rely on the MHP’s 50 lawmakers to push through some legislation.

Many argue that now that the parliamentary system has been replaced with a new executive presidency concentrating power in Erdogan’s hands, lawmakers are no more than props, but this is an exaggeration. As veteran Turkey analyst Alan Makovsky has repeatedly noted, the parliament retains some power, and Erdogan will have to continue to pursue hawkish policies on the Kurds, for instance, to maintain MHP support for his own agenda. He might also set his sights on Iyi’s 44 lawmakers. Because Aksener ran for president, she doesn’t have a parliamentary seat, making it harder for her to continue to control Iyi, which is more of a faction than a party. Tellingly, Aksener as of press time had yet to make a public appearance since the results were announced. The small pro-Islamic Felicity (Saadet) Party also failed to draw unhappy AKP voters, winning zero seats.

While the fairness of the elections will continue to be debated for a while, the hard truth is that Erdogan’s gamble — holding elections 18 months ahead of their scheduled date — has paid off. So what lies ahead?

Erdogan’s first order of business will be to concentrate on Turkey’s troubled economy. He owes his 16 years of power to the AKP’s economic success. Restoring market confidence is crucial, and lifting the state of emergency, now that he has formally acquired the powers it's afforded him, is an easy give.

The big question is whether Erdogan will cling to construction-driven growth and continue to battle the Central Bank over interest rates. If Mehmet Simsek, the market-friendly deputy prime minister, stays on in the new Cabinet, it might signal a softening on Erdogan’s part, but many argue he will not change tack before critical municipal elections that are scheduled to be held in March. Control of municipality finances helps grease graft and cronyism, and maintaining control over Istanbul and Ankara — both rejected the executive presidency in last year’s referendum — is key.

Other Cabinet appointments may offer some clues about foreign policy and the climate of repression that has enveloped the country since the failed 2016 coup. There is little reason to believe either will change dramatically before the municipal elections. Erdogan will likely maintain his hijinks with the United States and the European Union, mainly because he can. The consensus on both sides of the Atlantic is that however prickly and defiant, Turkey is too valuable an ally to discard. Erdogan will continue to bully Washington into ditching its alliance with the Syrian Kurds while working with Russia to curb Kurdish autonomy and to create the conditions to ease the return of millions of Syrian refugees. The refugees, who want to make their way to Europe, remain a useful bargaining chip in Turkey’s relations with the European Union. German Chancellor Angela Merkel, whose opponents accuse her of being too soft on refugees, rang Erdogan to congratulate him today. Under a deal struck with the EU, Turkey receives billions of euros in funding in return for holding the refugees at bay.

At home, Erdogan has little incentive to seek reconciliation with Peoples' Democratic Party (HDP) Kurds and will likely look to divide them as he did with the MHP. This bodes ill for Selahattin Demirtas, the HDP’s imprisoned presidential candidate who faces a slew of scantily evidenced terror charges. The PKK knows it would only make things worse for him and thousands of other HDP politicians and activists also behind bars if it were to escalate violence against the security forces and in the cities. It would also give the government an excuse to maintain emergency rule in the southeast. When all is said and done, Erdogan remains firmly in control of an increasingly authoritarian Turkey — and at least half of the country apparently wants things to be just so.