Four people were killed during campaigning in a mainly Kurdish town last week, and the government and the opposition are trading blame over escalating tensions ahead of the June 24 election. 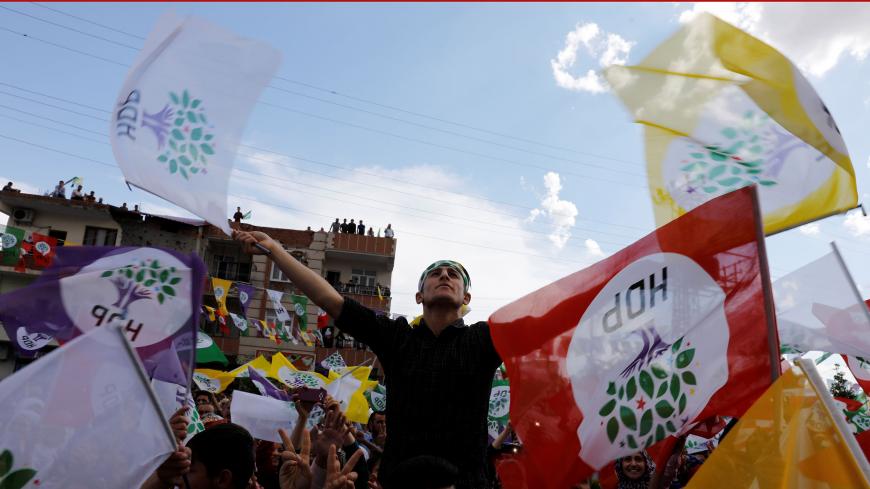 Four people have been killed in the run-up to Turkey’s election, staining what had been a largely peaceful election campaign and exposing electoral fault lines in the final days of the bitterly contested vote.

Tensions between supporters of the ruling Justice and Development Party (AKP) and the opposition Peoples’ Democratic Party (HDP) erupted into a firefight on June 14 in the mainly Kurdish town of Suruc near the Syrian border. The clash was a brutal reminder of how the battle to form the next Turkish government may come down to how Kurds, about 20% of the electorate, decide to vote.

Polls show support for the pro-Kurdish HDP hovering at 10%, the barrier it needs to clear to enter parliament. If it falls short, the AKP should easily win most of the legislature’s seats.

President Recep Tayyip Erdogan, who is running for re-election in a concurrent presidential poll, seems aware of the risk posed by the HDP, and last week an amateur video recording showed him ordering party officials to carry out “special work” on voter lists to keep the HDP below the threshold. The clear front-runner for the presidency, Erdogan has indicated he will not rule with a divided government and hinted in an interview with Bloomberg last month that the elections could be repeated to avoid one.

On Monday, the Turkish press reported that police detained Fadil Senyasar, whose father and two brothers were killed in Suruc. At least 15 people, including an HDP parliamentary candidate and other party officials, are in custody in connection with the deaths, and prosecutors have classified the investigation as secret.

The brother of AKP lawmaker Ibrahim Halil Yildiz was shot to death in the clash. Pro-government media outlets accused the Senyasar family of attacking Yildiz’ group when he stopped at their store asking for their votes.

Erdogan said the armed Kurdistan Workers Party (PKK) had killed Yildiz’ brother and compared the militants and the HDP to vampires. “This incident is a clear example of how the PKK and the HDP have still not abandoned their growth strategy of feeding on Kurds’ blood,” he said.

The HDP disputes this version. In a preliminary report obtained by Al-Monitor, the HDP said Yildiz had argued with the Senyasars two days before and that his entourage had armed themselves. A fistfight broke out during a second trip to the family shop and guns were drawn, the report alleged, citing anonymous eyewitnesses and local politicians.

The Senyasars were attacked at the local hospital after the father came to see his two sons who were being treated for wounds sustained in the shootout, the report read. The sons died there and the father died a day later at another hospital.

The Turkish Medical Association also said that two of the victims had been killed at the Suruc hospital, where security cameras were destroyed. Cellphone footage showed the hospital in a state of disarray.

The violence was part of a “game” to keep the HDP below the vote threshold, Co-chair Pervin Buldan told a campaign rally in Istanbul late on Sunday. “Suruc was a provocation ahead of the June 24 election,” she said. “They think, ‘If we do something like this in Suruc, no one will support the HDP.’”

The government has sought to couple the HDP with the PKK but Buldan’s party denies direct links with the outlawed group, which has waged a three-decade insurgency in Turkey at a cost of 40,000 lives.

About half of Turkey’s estimated 16 million Kurds back the HDP, while the rest support Erdogan, trusting the Turkish strongman to deliver peace and prosperity to their war-torn, impoverished region. The HDP is banking on greater Kurdish support in this election or risks exile from the legislature, the first time a Kurdish party won't be represented in more than a decade.

In a twist, Interior Minister Suleyman Soylu blamed Muharrem Ince, who is running for president on the main opposition Republican People’s Party (CHP) ticket, for the Suruc attack because of his recent overtures toward Kurdish voters, including a visit to Selahattin Demirtas, the HDP’s presidential candidate who has been in prison since November 2016.

“The reason for and the author of the incident in Suruc is Muharrem Ince. [He] spoiled them and directed them toward violence,” he told party members. “Unfortunately, there is an alliance of terrorism between the CHP and the HDP.”

The town of Suruc holds an especially sensitive place in Turkish memory. In 2015, 33 peace activists, most of them of university age, were killed in an Islamic State (IS) suicide bombing there. The attack led to the unraveling of Erdogan’s initiative to negotiate a settlement with the PKK.

This election campaign has seen sporadic episodes of thuggery, mainly in the form of gangs beating up opposition party members at their stands. But it has been spared the bloodshed of the 2015 election, including an IS bombing that killed more than 100 people at a pro-HDP peace rally.