The result of Turkey's referendum was far from the mandate the country's president was seeking and leaves much of the population — and outside world — questioning the legitimacy of the process. 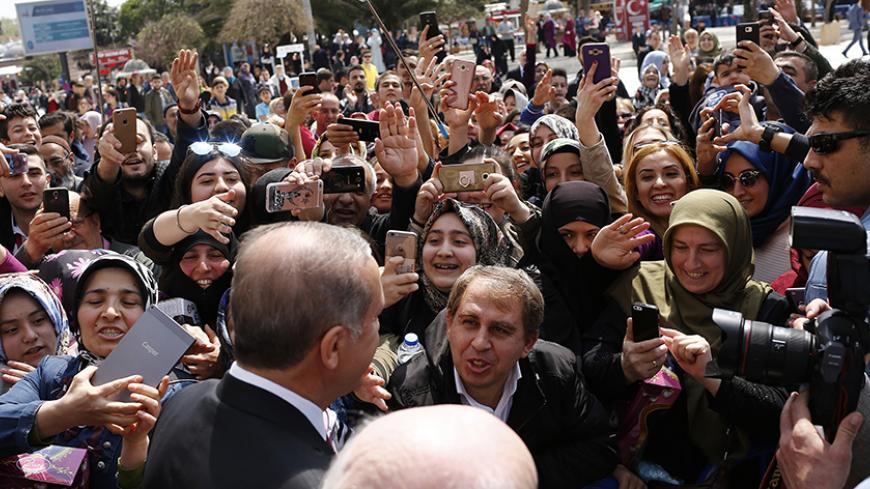 The outcome of Turkey's April 16 referendum wasn't exactly the victory President Recep Tayyip Erdogan was aiming for: clear support for constitutional amendments that would give him more executive power than even republic founder Kemal Ataturk had envisioned for himself. Dissent was strong in the country's largest cities, and European officials also have registered their disapproval.

Before the results were even announced, Prime Minister Binali Yildirim delivered the first victory speech of the night, not Erdogan himself. But with Erdogan's pragmatism, which for all practical purposes is necessary for his survival, he was quick to give a speech declaring victory, even as the results of the referendum were being contested with allegations of irregularities and fraud. Given the controversy of the neck-and-neck results blemished with the allegations of rigging, Erdogan couldn't resist — but he did not look confident or triumphant.

In an unusually brief and uncharacteristically muted speech, with a stony expression on his face, he insisted he had won the contested referendum and called on the outside world for acknowledgment. He once again mentioned enacting capital punishment.

According to official figures, approval for an executive presidency — which many Turks believe will amount to a one-man rule — came out with roughly 51.4% of the vote, while the "no" votes made up 48.6%. Turnout was measured at 83.3%. There were 24,325,985 “yes” votes counted against 23,189,021 “no” votes — a difference of 1,136,964. More than 800,000 votes were invalidated because they weren't clearly marked or weren't submitted properly. However, even as the voting was underway, the main opposition Republican People’s Party (CHP) and the pro-Kurdish Peoples’ Democratic Party (HDP) registered a complaint with the Supreme Election Board, alleging 2.5 million ballots were used without official seals on them. Under Turkish election law, those ballots would have to be considered invalid. Yet the Supreme Election Board, known to be close to Erdogan, dismissed the allegations.

Irregularities reported from all around Turkey are abundant. Even if all of them are unfounded, Erdogan’s win can best be defined as a Pyrrhic victory: victory, but at what cost? The most important indicator of such a judgment is his loss of all the big cities. In Istanbul, historically the economic and cultural megapolis of Turkey, and in the capital city of Ankara, “no” votes exceeded "yes" votes. In the third-largest city, Izmir, the ratio was devastating: 69% rejected the amendments.

All the areas along the Mediterranean and Aegean (southern and western) coastlines of Turkey, all the way to Istanbul, across the Marmara Sea, to the Black Sea coast overwhelmingly voted against the referendum, including the fourth-largest town, Adana, and the new touristic metropolis of Antalya. In the latter two, the difference was clear: 60% against; 40% in favor.

The ratio of “no” votes was strikingly high in most militant Kurdish towns where the mayors had been arrested and their administrations turned over to trustees appointed from Ankara. Some of those towns had been reduced to rubble as a result of heavy fighting and have remained under curfew almost for a year. The "no" votes in those towns were as follows: Cizre, 80%; Nusaybin, 79%; Silvan, 77%; Silopi, 75%; Lice, 85%; and Varto, 87%.

Erdogan derived his support mainly from vast agricultural regions of central Anatolia, some central-eastern provinces, and most of the staunchly conservative, nationalistic constituencies along the Black Sea coast.

Erdogan’s motto during the one-sided campaign was “One state, one nation, one flag.” But with the referendum results, it is safe to say Turkey is more polarized and divided than ever. Though it is still considered one state under one flag, it most likely is now three nations pretending to be one: two increasingly irreconcilable Turkish nations and the Kurdish nation.

It should never be forgotten that — even if the election proves to be fraud-free — Erdogan's Pyrrhic victory was achieved in an unprecedented, unfair campaign. The campaign was conducted under a state of emergency. Anybody against the referendum was dubbed by the president himself a traitor to the nation or a “terrorist” linked to Gulenists, the Kurdistan Workers Party (PKK) or the like. During March and April, Istanbul was plastered with signs supporting the referendum and posters of Erdogan.

The visual and print media controlled by the president engaged in the “yes” campaign almost entirely. For instance, according to a survey covering March 1-10, during primetime, the presidency enjoyed 53½ hours of coverage; the ruling AKP, 83 hours; and the ultranationalist, pro-referendum Nationalist Movement Party (MHP), 14 hours. The main opposition — the CHP — received 17 hours of coverage, and the pro-Kurdish HDP (whose chairman and 12 lawmakers are in prison) got only 33 minutes. The “yes” campaign had live coverage for 485 hours compared with 45½ hours for the opposition.

In fact, the Council of Europe’s advisory body on legal issues, the Venice Commission-European Commission for Democracy through Law, issued a report on Turkey in March saying that holding a referendum under the state of emergency conditions must be considered invalid if not illegal.

“In particular, the extremely unfavorable environment for journalism and the increasingly impoverished and one-sided public debate that prevail in Turkey at this point question the very possibility of holding a meaningful, inclusive democratic referendum campaign about the desirability of the amendments,” the report said. “In conclusion, the Venice Commission is of the view that the substance of the proposed constitutional amendments represents a dangerous step backward in the constitutional democratic tradition of Turkey. The Venice Commission wishes to stress the dangers of degeneration of the proposed system toward an authoritarian and personal regime.”

On the night of the referendum, Social-Democrat Kati Piri — the Netherlands' representative to the European Parliament and rapporteur for Turkey's accession bid — wrote on her blog: “In an unfair election environment, a narrow majority of the Turkish population has endorsed the constitutional package that will give President Erdogan unchecked powers, which will fit an authoritarian system. This is a sad day for all Democrats in Turkey. It is clear that the country cannot join the [European Union] with a constitution that doesn’t respect the separation of powers and has no checks and balances. If the package is implemented unchanged, this will have to lead to the formal suspension of the EU accession talks. Continuing to talk about Turkey’s integration into Europe under the current circumstances has become a farce. … The result of today’s vote is a major shift away from European values. Erdogan’s autocratic behavior has deeply polarized Turkish society and harmed the economy.”

As the first loud European voice on the most recent developments in Turkey, she continued tweeting about the contested results. “In unfair elections, narrow majority for 'yes.' Too small margin for such drastic changes,” she wrote. “Almost half of Turkish population voted 'NO.' Imagine if it had been a fair electoral campaign!”

Notwithstanding Turkey’s foggy EU prospects, life went on and Turks and Kurds awoke April 17 to a “New Turkey." After a probably rigged referendum and a Pyrrhic victory, the future is no more certain for its main protagonist, Erdogan, and even more uncertain for the almost 80 million citizens of Turkey.