Turkey’s historic referendum has passed, yet the "yes" camp’s slim margin of victory and the opposition’s accusations of foul play mean Turkish politics will remain volatile. 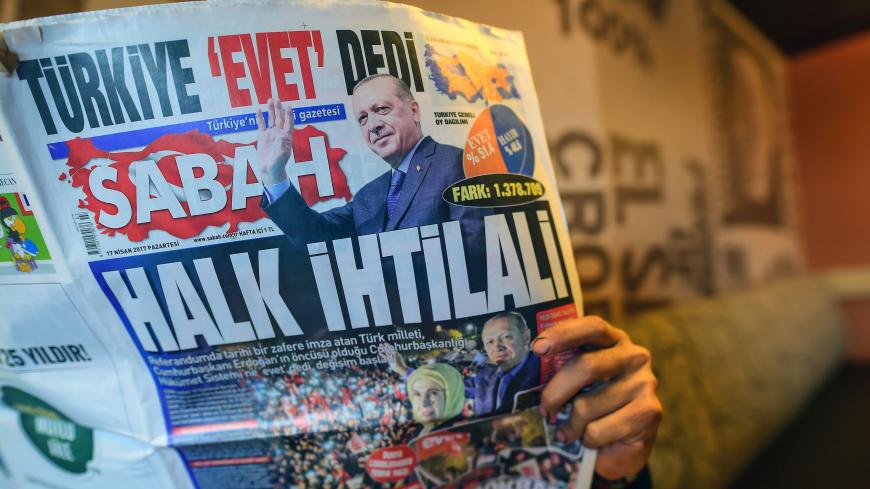 Turkey’s April 16 popular referendum amending the constitution to establish an executive presidency passed 51.41% to 48.59%. The results were virtually identical to the estimates of Turkey’s two leading polling firms, Gezici and Konda.

Yet several dynamics suggest the referendum will be anything but the climactic showdown that would have given Turkish President Recep Tayyip Erdogan a clear mandate to unify a deeply divided Turkey and prepare the country for his executive presidency. (The amendments do not come into effect until 2019.)

The major problem was that hours before polling stations closed, the Supreme Election Board (YSK), Turkey’s highest electoral authority composed of high court judges, reached a controversial decision. The YSK said that it will count unstamped ballots “unless there is … proof that ballots and envelopes are brought from outside.” The YSK’s seal on ballots and envelopes marks the voting accoutrement as genuine. In past elections, votes would be invalidated if they lacked the proper YSK stamp.

The YSK’s decision stood in contrast with Turkey’s electoral laws and political traditions, inviting a furious backlash from the “no” camp. According to Hurriyet Daily News, Bulent Tezcan, the deputy chairman of the main opposition Republican People’s Party (CHP), said, “The YSK is paving the way for us to enter an unfortunate period that accepts the principle of elections under judicial manipulation rather than elections under judicial supervision. The decision that the YSK made after the voting began will bring the reliability of the elections into question. The elections will face a serious legitimacy problem. The YSK changed the rules after voting began.”

The controversy over the YSK decision was compounded by alleged video footage of ballot stuffing. One video posted on the staunchly secular Sozcu newspaper’s website showed several men furiously stamping the “yes” side of ballots in the southeastern province of Sanliurfa. A similar video showed a woman confronting polling station officials over why the ballot she was given had already been marked with a “yes” vote. Opposition websites and Turkish social media sites were full of comments wondering how many of the 1.37 million votes that carried the day for Erdogan and his ruling Justice and Development Party (AKP) were the result of such irregularities and the YSK’s “unstamped ballots” decision.

Even if foul play did not determine the outcome, the results have interesting implications for the future of Turkish politics and spell trouble for Erdogan and the four parties represented in parliament.

For Erdogan, April 16 was barely a victory. His “yes” camp, which included Nationalist Action Party (MHP) leader Devlet Bahceli, received far fewer votes than those for the AKP and MHP together (nearly 61%) in the general elections of November 2015. In fact, the “yes” votes on April 16 numbered fewer even than the 52% that Erdogan had received in the presidential election of August 2014. And the “yes” camp’s April 16 victory came only after Erdogan ran a highly divisive campaign that used state resources and suppressed the “no” camp, thus creating a decidedly not free and highly unfair situation in the run-up to the referendum.

In addition, the “no” votes carried all but one of Turkey’s five most populous provinces. The slight edge that the “no” camp gained in Istanbul and Ankara, the country’s two largest provinces whose metropolitan municipalities are still under AKP control, portends that an effective opposition to the ruling party’s mayors in the local elections of 2019 could disturb the AKP’s position.

The results on April 16 also tell the opposition parties that they should up their game. Although the “no” votes prevailed in many of the provinces in Turkey’s mainly Kurdish southeast, in many provinces, the “yes” votes were higher than the AKP’s votes in the November 2015 general elections. This situation may spell bad news for the Peoples' Democratic Party, which enjoyed a near-monopoly in elections in many of those provinces. (To be sure, a big part of the problem is that thousands of Turkish Kurds have lost their homes and businesses as a result of the fighting in southeast Turkey since the summer of 2015.)

The main opposition CHP, too, should think about whether its uncharismatic chairman, Kemal Kilicdaroglu, is helping his party’s case or dragging it down with him. Many Turks in the “no” camp were disappointed by Kilicdaroglu’s body language during the press conference on the night of April 16 and especially his comments on allegations of ballot stuffing and foul play. One commentator compared Kilicdaroglu’s weak stance to the brave campaign of Meral Aksener, a former MHP member who was expelled from her party for challenging Bahceli. Kilicdaroglu has been in power since 2010 and he is likely to face a challenge for party leadership from his colleagues in the days ahead.

Indeed, perhaps the most important sign indicating that the Turkish domestic scene is bound to get more interesting lies in a tweet sent by Hurriyet Daily News Editor-in-Chief Barcin Yinanc. Yinanc pointed out how, in Istanbul’s Fatih district, a “vote depot” for the ruling AKP, the “no” camp won by 51%.

If a heavily religious neighborhood like Fatih denied the wish of Erdogan, its champion in Turkish politics for three decades, it is not impossible to imagine that even a relatively appealing and capable opposition campaign could hurt Erdogan and his party in the 2019 elections.