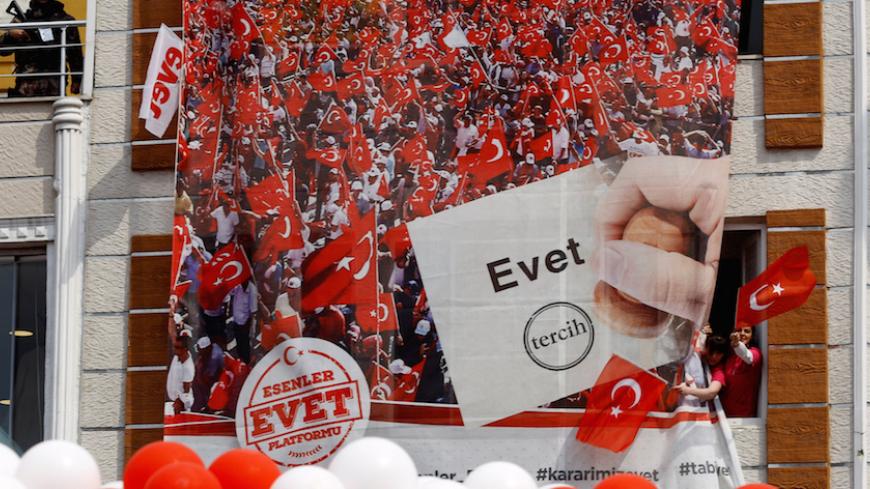 People wave national flags as they wait for arrival of Turkish President Recep Tayyip Erdogan during a ceremony in Istanbul, March 26, 2017. - REUTERS/Murad Sezer

In a March 27 interview with Hurriyet Daily News Editor-in-Chief Barcin Yinanc, Konda polling company director Bekir Agirdir described the race as “neck and neck.” Agirdir said that while there are “some undecided even among the core loyalist constituency of the [Justice and Development Party] AKP," "there is no hesitation in the ‘no’ camp, where you have the voters of the [Republican People’s Party] CHP and [the Peoples’ Democratic Party] HDP.” Despite occasional setbacks, Konda remains one of Turkey’s most reliable polling firms.

Agirdir added that half of Nationalist Movement Party (MHP) voters plan on voting against the amendments. Another quarter of MHP voters remain undecided.

That outlook puts MHP Chairman Devlet Bahceli, who has formed an alliance of convenience with President Recep Tayyip Erdogan and his ruling AKP, in a difficult bind. Bahceli is currently facing a serious backlash from his own ranks for supporting Erdogan. If the “no" votes have it, Bahceli could very well lose his chairmanship, and Erdogan a critical (if uneasy) partner.

Other opinion polls reveal similar trends: While the bases of opposition parties — the HDP and the secularist CHP — are vehemently against expanding presidential powers, the ruling AKP is fighting an uphill battle with “soft” support from its own base and uncooperative MHP voters.

But all is not lost for Erdogan and the AKP. Gezici Research, which like Konda has a good track record on predictions, had estimated in January that the “no” votes stood at 58% against 42% “yes.” Gezici’s more recent surveys, however, show a narrowing of the gap, with the “no” votes dwindling to just 51%, partly because 45% of voters in the 18-27 age group do not plan on voting in the referendum.

In fact, Erdogan and the AKP face a situation that's much more positive than that of two months ago. A recent overview of 28 public opinion polls by the news website T24 shows that while 12 predict a win for the “no” camp, eight think the “yes” votes will win.

The AKP is running a two-pronged campaign to convince the undecided members of its base and turn the doubtful toward its side, appealing to the Turkish people’s hopes as well as frustrations. As Al-Monitor’s Pinar Tremblay pointed out on March 24, Erdogan is producing angry outbursts and using his acerbic style against the opposition and European countries to cast the vote as a life-and-death struggle for Turkey. Meanwhile, the pro-amendment campaign is buying massive TV, radio, newspaper and billboard ads that contain a calm, cool-headed message that the constitutional amendments will streamline Turkey’s cumbersome bureaucracy, improve governance and increase national wealth and power.

The other side, however, is having a hard time getting its message past the AKP’s pressure on media outlets.

Will Turkey’s opposition keep its momentum and carry the day? Or will Erdogan reverse the tide and finally reach his long-held dream of establishing an executive presidency? The contest will probably go down to the wire.