The voting pattern of Kurds has become the most debated issue of the Turkish referendum, with many people pointing fingers at Kurdish voters for voting for the "yes" front. 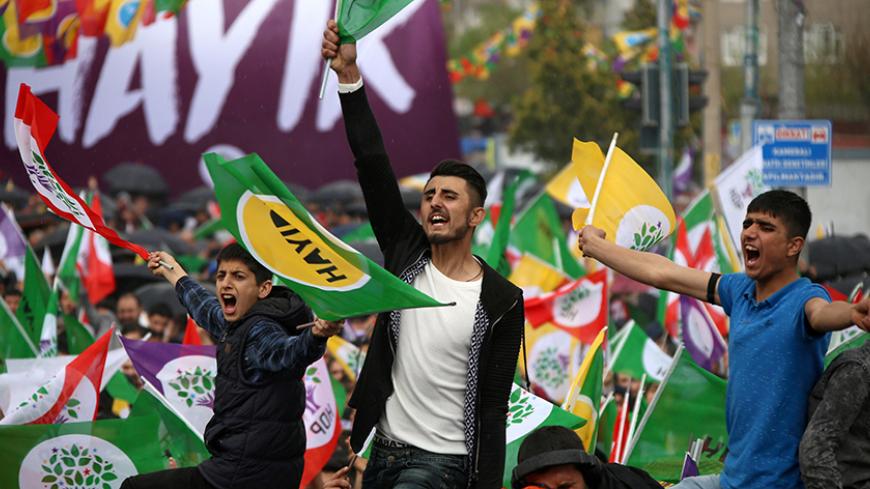 Supporters of Turkey's pro-Kurdish opposition Peoples' Democratic Party shout slogans during a rally for the referendum in the southeastern city of Diyarbakir, Turkey, April 15, 2017. - REUTERS/Sertac Kayar

DIYARBAKIR, Turkey — Right now in Turkey all political parties are busy discussing all aspects of the April 16 referendum. But the Kurdish-dominated Peoples’ Democratic Party (HDP) is focused on one subject alone: Did Kurds vote for Recep Tayyip Erdogan’s "yes" front?

HDP constituents are deeply disturbed by accusations of some “no” front officials that the “yes” received more votes than anticipated. An HDP official told Al-Monitor, “In Diyarbakir, the ‘no’ front got 75% of the vote. If they had worked hard, they could have received 70% in Istanbul. Were ‘yes’ votes high only in places where Kurds live? What about central Anatolia? Are there Kurds there also?”

In Diyarbakir, a city where Kurds are in the majority, the HDP had received 72% of the votes in the Nov. 1 general elections. In the referendum, the “no” front got 67%, that is, a decline of 5 percentage points. The Justice and Development Party (AKP) had received 21% of votes in the general election, but in the referendum, the AKP’s “yes” went up by 11 percentage points to 32%. Likewise, in Hakkari, an HDP stronghold, the “no” front was strong. But Kurds are blamed solely for the voting results without taking into account the inequalities in the campaigns.

The debate was enflamed by an analysis by journalist Can Dundar, who tweeted, “The increases in ‘yes’ votes in the east and southeast affected the outcome, while in 17 out of 30 major cities, ‘no’ won the day.”

Did the “yes” front win because of Kurdish votes?

According to associate professor Vahap Coskun of Dicle University Faculty of Law, who closely follows the southeast and Turkey’s politics, Kurdish votes did play an important role in an unexpected number of “yes” votes. He told Al-Monitor, “We were guessing that the AKP would get a bit more than it did in general elections. Three reasons: First, Kurds who support the AKP believe that it’s the AKP and Erdogan who will ensure democratization of Turkey and solve the Kurdish problem. Although they have some objections to proposed constitutional amendments, they still believe it was the best choice they had.

"The second reason is the reaction to the PKK [Kurdistan Workers Party] because of the trench-barricade and urban warfare and distancing themselves from the HDP. The HDP would not come up with ways to overcome this distance. And the HDP doesn’t have the means to solve this issue, as they are overwhelmed with their own problems. Their co-chairs and parliamentary deputies are in prison. The municipalities they controlled were taken over by state-appointed trustees. They are incapable of motivating the voters and mobilizing masses.

"The third reason is that Kurdish segments that did not usually identify with the AKP and HDP were generally inclined to vote ‘yes.’ Some, like [Islamist] Huda-Par, openly declared they will vote ‘yes.’ They felt the Kurdish issue was not going to be solved with the parliamentary system. Hoping, perhaps, that the presidential system will bring about a solution, they voted ‘yes.’ Both the president and the government have acknowledged that the relative increase in Kurdish votes played an important role in the winning of the ‘yes’ camp.”

Also sharing these views is Sedat Yurtdas, a former Democracy Party (DEP) deputy and a member of the Executive Council of Dicle Social Research Center. He said the HDP could not prepare for the referendum under equal conditions. “Taking the Nov. 1 general elections as a yardstick, there was a decline in HDP votes and some increase in the AKP’s share, but you have to analyze this properly and keep in mind the conditions under which the HDP had to prepare for the referendum. Their co-chairs and members of parliament are in prison,” he told Al-Monitor. “They have surrendered 80 municipalities to government trustees. Arrest, detentions, court cases, pressures of all kinds. They could not run a proper campaign. Also don’t forget the destruction at Sur-Diyarbakir, Nusaybin, Yuksekova and Cizre, and the displacement of people who used to provide 90% of the HDP votes in those cities. Also, in any society, there will be some votes that will shift to the party that looks ahead, in this case the AKP, which was promising a better economic, social and political future.”

The AKP made up for its losses in its traditionally strong locations with the votes it got from the Kurds. Yurtdas noted how Erdogan referred to the Kurdish votes. He knew these votes played a role in his becoming the executive president.

Kurds provided 1% of the “yes” votes and about 10% of the “no” votes. Those in the “no” camp who blame the Kurds and say that “the Kurds sold us out” are forgetting that the Kurds were detained for doing their folk dances during the campaign.