In the final stretch before Turkey’s critical referendum, “no” voters are concerned about government meddling and electoral fraud in what is expected to be a nail-biting vote on the country’s future. 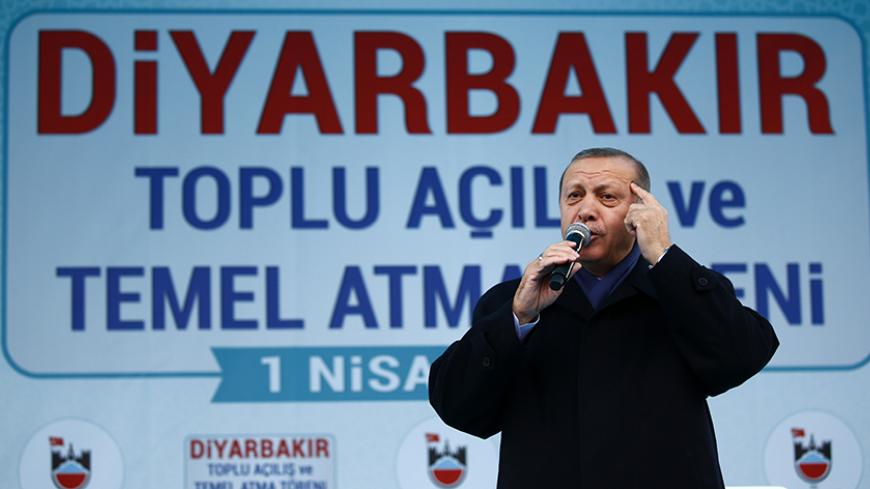 Turkish President Recep Tayyip Erdogan addresses his supporters during a rally for the upcoming referendum in the Kurdish-dominated southeastern city of Diyarbakir, Turkey, April 1, 2017. - REUTERS/Murad Sezer

DIYARBAKIR, Turkey — With pollsters predicting a close race in Turkey’s referendum on April 16, fears of electoral fraud and government meddling are more relevant than ever, fueled by the extraordinary powers the government wields under the state of emergency. The run-up to the plebiscite, which will seal the fate of constitutional changes designed to install an omnipotent presidency, is seen as writing on the wall as “no” campaigners — nationalists, social democrats and Kurds alike — face daily obstructions and bullying, including physical assaults.

While the entire “no” camp is apprehensive, the situation in the southeast — where the Kurdish vote will be of critical importance — is particularly sensitive. The region’s cities — the scene of a devastating crackdown on the outlawed Kurdistan Workers Party (PKK) last year — have seen thousands of people displaced, while hundreds of Kurdish politicians, including party leaders, lawmakers and mayors have landed in jail. Badly crippled, the Peoples’ Democratic Party (HDP), the main Kurdish political force, is trying to soldier on with its “no” campaign against its main rival, the ruling Justice and Development Party (AKP), which also enjoys a strong base among the Kurds.

HDP members say they face the “unchecked power” of the government, reflected not only in obstructions to their campaigns but also in moves to keep party activists away from polling stations on voting day.

On April 6, for instance, HDP lawmaker Selma Irmak submitted a parliamentary question to the justice minister, saying that electoral authorities had rejected all 151 individuals the party had nominated for duties at polling stations in the city of Hakkari, without providing any reason. She called for an explanation on assessment criteria, asking, “How likely it is that all those 151 individuals are criminals? Is not [their wholesale rejection] casting shadows on the credibility and fairness of the referendum?”

It was the latest in a string of complaints concerning rejected or canceled nominations, including claims that large numbers of people from pro-AKP trade unions had been appointed to preside over ballot boxes.

Another major concern stems from the displacement of thousands of Kurds in last year’s security crackdown, which led to massive destruction in residential areas, especially in Diyarbakir — the largest city in the southeast — and towns such as Nusaybin, Sirnak, Cizre and Silopi. Some neighborhoods were completely razed to the ground, while others remain off limits to residents. The polling stations of those areas have been transferred to other neighborhoods, but how those changes and the population movements will play out on voting day remains to be seen.

Above all, the fact that the referendum is held under a state of emergency — in place since the coup attempt last year — remains an overriding concern for the entire “no” camp.

Sibel Yigitalp — an HDP deputy for Diyarbakir — told Al-Monitor that public officials in the southeast were frequently overstepping the law, eager to please the government. “Even our ‘no’ campaigns are being impeded. Our vehicles are being confiscated, campaign workers are being detained and people we nominate for electoral councils are being rejected,” she said. “The imprisonment of our co-chairs, lawmakers and mayors has created unequal conditions from the very start.”

For Yigitalp, the state of emergency means that anything can be expected on voting day. “There are public administrators who are emboldened by the state of emergency and feel obliged to do whatever the government says, acting outside the law. One can even question whether the referendum will be really a referendum under such circumstances,” she said. “We are very much worried. There is no one to resort to against all those unlawful practices, so we don’t know what to expect. We are faced with an unchecked power.”

In previous elections, concerns over election security pertained mostly to areas where the PKK was active. Ankara claimed the PKK and its supporters influenced voters through pressure and intimidation, while Kurdish parties leveled similar accusations against the security forces. Today, however, AKP members in the region seem relaxed.

The head of the AKP’s Diyarbakir branch, Muhammet Akar, told Al-Monitor he had no serious concerns over election security this time. “High-level security measures are in place both in rural areas and urban centers. In addition, voters have become more conscious and capable of protecting their votes,” Akar said.

He was confident that the vote would be free and fair. “Everyone will vote with their free will. All measures have been taken to ensure election and voter security,” Akar said. “We will neither allow anyone’s vote to be stolen nor let our vote to be stolen.”

Despite such assurances, voters remain wary. “I’m concerned [over irregularities] because there were always problems with ballot boxes in the past,” a voter, who requested anonymity, told Al-Monitor. “I don’t expect systematic pressure on voters but individual pressures at certain places. I’m concerned mostly about rural areas.”

Shopkeeper Abdulkerim Akkus believes that the vote will be largely fraud-free and that the Kurds “will show their real strength” at the referendum. “But my real concern is that the government might cancel the vote if it sees the ‘no’ vote prevailing,” he said.

Kurds who had served at polling stations in the past say problems of election security and electoral fraud are more pronounced in rural areas. Thus, they say, polling station officers and volunteer observers are important, but many people today are scared to volunteer for such duties.

Recalling his experience at the last election, a former volunteer said, “There were attempts [by some] to vote for people who did not show up and to falsify numbers when writing the counting reports. The atmosphere was more relaxed at the time, but now no one would like to volunteer for such duties.”

In a parliamentary question last week, Aycan Irmez, an HDP deputy for Sirnak province, exposed another aspect of the party’s concerns. She claimed the government was handing out money to impoverished people in Silopi, one of the worst-hit towns in the security crackdown, to cajole them into backing the amendments. “Having condemned the people of Silopi to poverty, the government is now distributing money under the name of assistance just days before the referendum to secure the ‘yes’ vote,” Irmez said. She slammed the government’s “unethical” campaigning methods, adding that the Sirnak governor had earlier warned locals that their homes would not be rebuilt if the “no” vote prevails in their neighborhoods.