Amid ongoing controversy over the integrity of last year’s referendum, the Turkish government’s overhaul of electoral rules erodes further the opposition’s trust in fair elections. 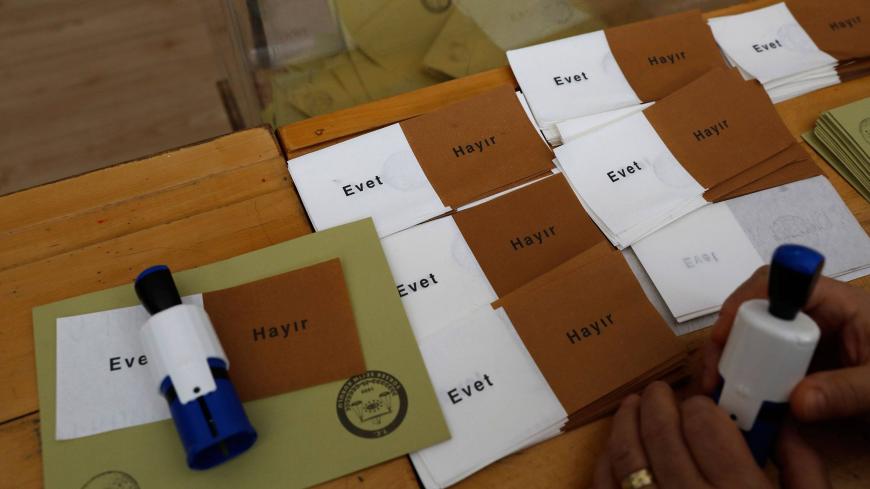 Ballot papers are seen at a polling station during a referendum, Ankara, Turkey, April 16, 2017. - REUTERS/Umit Bektas

In the April 16, 2017, referendum, which narrowly approved amendments concentrating power in the hands of the president, the Supreme Election Board (YSK) made a last-minute decision to accept ballots that did not bear the stamp of election officials, openly flouting the law and casting a lasting shadow on the outcome. Many believe the validation of unstamped votes tipped the result in favor of the “yes” camp, which won by 51.4%. Kemal Kilicdaroglu, the leader of the main opposition Republican People’s Party (CHP), said in February that the actual result was 51.2% in favor of the “no” camp.

Barring a snap poll decision, Turks will vote in municipal, parliamentary and presidential elections in 2019. The presidential vote will mark the official transition to the new governance system approved in the referendum, with President Recep Tayyip Erdogan standing out as the prime contender. The new electoral rules, passed by parliament March 13, grant legitimacy to unstamped ballots. This indicates that the government has indirectly acknowledged that the law was violated in the referendum that fresh controversy over the fairness of elections is now guaranteed for next year’s polls.

Soon after unstamped ballots became legal, misgivings deepened even further over reports that the YSK had printed 500 million ballot envelopes for a 55-million electorate.

Meanwhile, a new online service allowing citizens to trace their ancestries astounded many Turks who discovered that great-grandparents born in the 19th century were still alive, according to official records.

The CHP worries that dead people could be “resurrected” as voters for Erdogan and his Justice and Development Party (AKP) next year. “There are 2,537,000 dead people who appear as alive ın the [official] records. The ballot boxes are arranged on the basis of these records,” CHP lawmaker Haluk Peksen told Al-Monitor. This means that millions of fake votes could be cast in the elections, he said.

Then, who is going to run the voting booths? Civil servants, according to the new law. The CHP and the pro-Kurdish Peoples’ Democratic Party (HDP) argue that public employees are essentially government servants and cannot be trusted to be impartial in dealing with rigging attempts.

Other provisions in the new law make it possible to move or merge ballot boxes and facilitate the summoning of police to polling rooms. This has stoked concern, especially for the Kurdish-majority southeast. HDP spokesman Ayhan Bilgen said he believes the provisions are designed to obstruct HDP voters. “Relocating ballot boxes could become a means to hamper or make voting more difficult in rural areas,” Bilgen told Al-Monitor. “The presence of security forces in close proximity to voting booths would have a similar effect because it would make people anxious and discourage them from boldly protecting their vote. We see those amendments as an attempt to deter HDP supporters from voting.”

The most significant amendment, however, allows political parties to form election alliances — a move tailor-made to formalize the AKP’s partnership with the Nationalist Movement Party (MHP), which has been going on for several years. With the alliance, Erdogan is hedging his bets for the 2019 polls after his tiny — and controversial — winning margin in the referendum, while the MHP is seeking to remain in parliament, even if its individual vote falls short of the 10% national threshold. In broader terms, however, the amendments represent a fresh blow to democracy and political pluralism. Of note, legislative proposals to lower the 10% threshold and pave the way for a more inclusive parliament have failed to make it through the AKP-dominated parliament.

The hasty overhaul of electoral rules has only compounded concerns over the integrity of future elections. Many in the opposition say the legitimacy of next year’s polls is already compromised and are calling for a boycott.

Peksen sees political chaos down the road. Painting a gloomy picture, he said, “We are heading to elections under a state of emergency. More than 100,000 guns have been missing since the coup attempt [in July 2016] and the state is not interested in hunting them down. The streets are full with armed people. Dead people figure as alive in population registers and the stamp requirement [for ballots] is no more. We do not expect safe and secure elections in such conditions. Turkey is drifting toward chaos. If the conditions are not rectified, the opposition will have only one option left, which is a collective boycott of the elections.”

Ilhan Cihaner, another prominent CHP lawmaker, agreed. “If the conditions for fair and secure elections are not ensured, we should definitely consider boycotting the elections,” he said.

The HDP had brought up the boycott option much earlier, arguing that the ongoing state of emergency is reason enough to boycott the elections. Yet Bilgen said a united opposition can make a change. “All oppositional quarters in society should occupy themselves with this issue. By joining forces and putting up a determined attitude, the opposition can ensure more democratic conditions for the elections,” the HDP spokesman said. “To act as if nothing has happened is to normalize the current state of affairs. We need to make clear to both the government and the international community that this state of affairs is unacceptable.”

The HDP’s objections go beyond the latest amendments. “Election security is not only about voting day. It means also democratic conditions for equal and free electioneering,” Bilgen said. “When various events are banned under the state of emergency and political work is restrained through the trials [of politicians], this means putting huge pressure on the will of the electorate.”

Prime Minister Binali Yildirim has played down the boycott calls, advising proponents “to turn to a more useful discourse.” Kilicdaroglu, meanwhile, appears reluctant to back the boycott option, although some of his own lawmakers are vocally advocating it. “Why should we boycott elections that we are going to win?” he said March 14.

The main opposition leader is already under fire from his own ranks for failing to mobilize a forceful resistance to the AKP. Kilicdaroglu maintains the “no” camp was the real winner of last year’s plebiscite, but on referendum night, he had discouraged protesters from taking to the streets. Erdogan, for his part, had offered a sardonic response to the objections. Using a Turkish proverb, he said it was too late to shut the stable door because the horse had already bolted. Now, amid the uproar over an electoral overhaul designed to boost Erdogan in the vital elections next year, pressure is mounting on the CHP leader for “extraordinary” forms of opposition to avoid another jibe that the horse has already bolted.