Supporters of Turkish President Recep Tayyip Erdogan say the new changes to the country’s voting rules will secure the elections, but the opposition worries the new law will lead to fraud and has filed a lawsuit to block it. 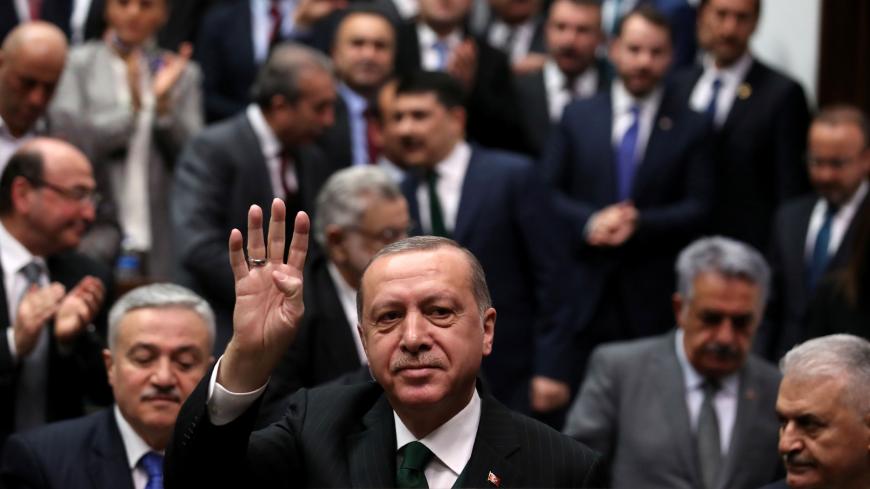 Turkish President Recep Tayyip Erdogan greets members of parliament from his ruling Justice and Development Party as he arrives for a meeting at the Turkish parliament in Ankara, Turkey, March 6, 2018. - REUTERS/Umit Bektas

Turkey’s parliament has introduced new election rules the government says will better secure ballots, while the opposition says the overhaul could lead to fraud and undermine the integrity of a slate of polls scheduled for next year.

So charged is the debate over the changes that a fistfight erupted between lawmakers during the 20-hour marathon session that wrapped Tuesday morning. President Recep Tayyip Erdogan, whose party drafted the bill with parliament’s smallest party, is now expected to sign it into law.

The changes allow political parties that form an alliance with a bigger party to win seats in parliament even if they fall below the national vote threshold of 10%. The new rule will allow Erdogan’s ruling Justice and Development Party (AKP) to run with the far-right Nationalist Action Party, which it has worked closely with since a failed 2016 coup attempt and subsequent state of emergency.

The legislation also allows ballots that are not stamped by election officials or stamped multiple times to be admitted, formalizing a controversial measure in a 2017 constitutional referendum in which unvalidated ballots were counted.

International election observers said at the time that as many as 2.5 million ballots may have been manipulated in the referendum, which narrowly passed with 1.4 million votes to give Erdogan unprecedented new powers. Turkey dismissed the criticism, saying foreign observers were partial.

The main opposition Republican People’s Party (CHP) filed a lawsuit with the Constitutional Court to annul the changes that it says will prevent free and fair elections, spokesman Bulent Tezcan said.

The council has ordered 500 million ballot envelopes for the 2019 elections, far more than would suffice for the country’s 55 million voters, “casting a shadow on the vote. We are saying that large-scale fraud will occur,” said CHP lawmaker Haluk Peksen.

Turks vote in municipal elections next March, then presidential and parliamentary elections will be held simultaneously in November 2019, enshrining the constitutional amendments voted on in the referendum that include abolishing the office of prime minister and concentrating new powers in Erdogan’s office.

The government publicly says it is sticking to those dates, and Erdogan has asserted that calling early elections does not honor democracy.

But speculation persists he may do just that. Last week, Erdogan met with party leaders who support bringing the vote forward, and they argued the AKP should tap into the current groundswell of nationalist sentiment unleashed by a military operation against Kurdish militants in Syria, reported Hurriyet.

The AKP stands to benefit from a recent thaw in tensions with the European Union ahead of a summit Erdogan will attend this month, senior party members said. On Wednesday, the European Commission released a payment of 3 billion euros to Turkey to aid its efforts to stem the flow of irregular migration.

The risk that the economy may sputter later this year also boosts the case for holding elections sooner rather than later, according to Hurriyet. Its coverage read, “Erdogan listened to these recommendations without objecting and said that the party would begin research into the matter of an early election,” and that the party would move its convention up from autumn to the start of summer.

The changes to the election law were rushed through parliament because there “is an intent to hold a pressure election at any time, and those preparations are underway,” said Meral Danis Bestas, a lawmaker in the opposition Peoples' Democratic Party (HDP). “They are changing the electoral law during emergency rule, let alone holding an election during emergency rule,” she said, according to an emailed statement from her party.

So far the opposition is dismissing calls from party ranks that the changes to the electoral law are cause to shun the vote. CHP leader Kemal Kilicdaroglu said, “Why would we boycott an election we’re going to win? This law shows that [the AKP] has already lost.”

But the CHP, perennial runners-up in Turkish elections, may be hedging its bets. Tezcan said the party is working on possible electoral alliances. Bestas also said the HDP is not opposed to cooperating with other parties in the next election.

In the search for allies, an unexpected kingmaker is emerging: the Saadet Party, a small Islamist grouping that garnered less than 1% of the vote in the last general election.

Chairman Temel Karamollaoglu, a 76-year-old former engineer, has so far rebuffed overtures from the AKP, saying he would be “crazy” to back a government he has criticized for its crackdown on opponents during emergency rule.

Saadet, which traces its roots to the same political movement as Erdogan but with whom it split in 2001, may put forth its own presidential candidate but has not ruled out an eventual pact with opposition parties, a source close to Karamollaoglu told Al-Monitor on condition of anonymity.

“The AKP wants us so that they can point to the opposition and say, ‘They are illegitimate, they are not nationalists.’ As long as we remain in the opposition they can’t say that. We can prevent the further polarization they are trying to create for elections,” he said.