The Islamist Saadet Party's message of reconciliation and more moderate approach to religion may build support beyond its conservative base, especially with voters disenchanted after 15 years under President Recep Tayyip Erdogan. 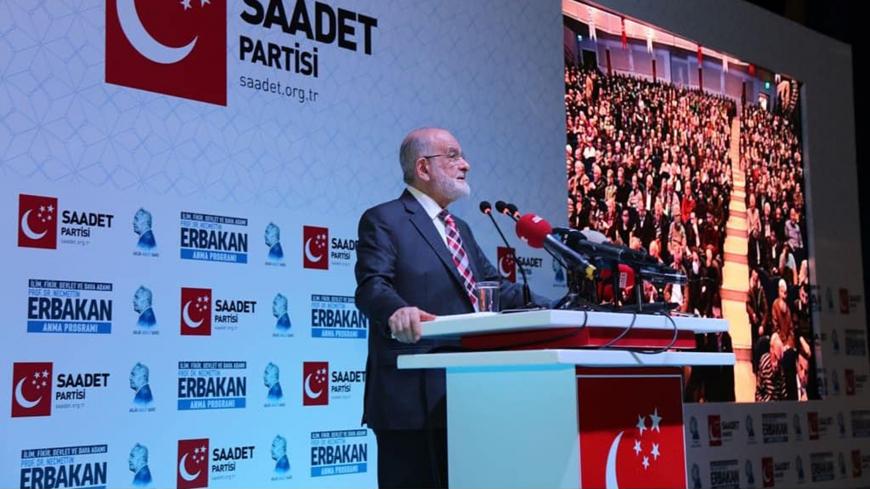 Out of the scrum has emerged an unexpected power broker: the small Islamist Saadet Party, or Felicity Party, led by Temel Karamollaoglu, a mild-mannered former engineer who has been courted by players across the spectrum, including the ruling Justice and Development Party (AKP).

Saadet, which garnered less than 1% of the vote in the last general election and receives no state funding, is positioning itself as Turkey’s party of consensus, pointing to its principles of social justice and welfare to appeal to left-leaning voters and its deep roots in political Islam as its conservative badge.

“We are the only political movement that can stop the polarization in Turkey because we can sit down and speak with everyone, accepting our differences,” Karamollaoglu, 76, told Al-Monitor in an interview. “Ours can be a platform of social democrats, nationalists, Kurdish voters and those who previously supported the AKP but are now disillusioned. We are seen as an antidote to the country’s polarization.”

Opinion surveys show Karamollaoglu, elected chairman in late 2016, has helped boost Saadet’s share of support to about 6%, still short of the 10% threshold to send lawmakers to parliament. But its share may yet prove decisive in a close presidential election. Erdogan’s candidacy is polling between 45% and 55%.

“There are enough dissatisfied AKP voters who do not like the direction the party has taken in the last two years to cross the threshold. Right now they don’t have a party. If Saadet can free itself from the tethers of its past and brandish a democratic, reformist identity, it will win those votes,” Etyen Mahcupyan, a newspaper columnist who served as an adviser to the AKP government until 2015, told Al-Monitor.

Erdogan has sought to quell rumors he will push the elections forward, and on Tuesday he told AKP lawmakers that Turks will elect new mayors in March 2019 and hold a joint parliamentary and presidential ballot eight months later, as scheduled. But he also admonished party members to “focus more on the election process and work much harder.”

Already, Erdogan has made a formal alliance with the far-right Nationalist Action Party for the next general election, which will spell the end of Turkey’s century-old parliamentary system after a controversial constitutional referendum narrowly passed last year that endows Erdogan’s office with unprecedented powers.

“As much as the government insists there will not be an election this year, we see chances increasing there will. Whether it’s foreign policy or the economy, Turkey’s problems will only worsen next year, and so there is a push to hold elections sooner rather than later,” Karamollaoglu said.

Signs political parties are readying for snap elections include a report on Wednesday that the main opposition Republican People’s Party (CHP) is considering nominating the popular leftist mayor of the city of Eskisehir to run for president.

Karamollaoglu said his party plans to field its own presidential candidate, even floating former President Abdullah Gul, an Erdogan confidant until Gul left office in 2014, as a possibility. But Saadet has not ruled out supporting a consensus candidate in the first or second round.

Calls have mounted among Turkey’s opposition to unite to challenge what they see as Erdogan’s authoritarianism, especially during the state of emergency imposed after a bungled military coup in 2016. Tens of thousands of people have been jailed, including opposition politicians, journalists and scholars.

Karamollaoglu has decried the crackdown that led to the imprisonment of nine lawmakers from the pro-Kurdish Peoples’ Democratic Party (HDP), including former chairman Selahattin Demirtas.

“It damages principles of freedom of thought to jail lawmakers for what they have said. Demirtas is among the most mild-tempered people who could lead the HDP,” he said. “We recognize the problems that lawmakers in the HDP face and we are able to easily speak with them and commiserate.”

Saadet and the AKP emerged from the same political movement, National View, that was led for decades by late Prime Minister Necmettin Erbakan. After successive Islamist parties were banned for violating Turkey’s secular constitution, Erdogan and other reformists broke with Saadet in 2001 and their newly minted AKP won in a landslide the following year. It has dominated Turkey ever since.

Now Erdogan may be embracing his pedigree. He met Karamollaoglu last month, signaling he would like Saadet to join his alliance in what observers say is an effort to cast it as a cohesive conservative bloc, in sharp relief to the fragmented opposition.

But its differences with the government are vast, including Saadet’s demand Turkey adhere to a rigid separation of powers, he said, adding that his party supports either a return to a parliamentary system or strengthening the legislature, as well as an independent judiciary.

“When we go to the mosque, we pray in the same row, but that’s where our similarities end,” Karamollaoglu said. “How can I support [AKP] policies on investment, foreign relations, agriculture, when there is this much injustice and unlawfulness? I'd have to be crazy.”

The AKP differentiated itself from Saadet in its first decade by espousing free-market tenets that sold off tens of billions of dollars worth of state enterprises and shrunk government subsidies for farmers. The AKP pursued European Union membership and a strategic alliance with the United States. Those messages resonated with voters and Saadet, which rejects such policies, became the rump party of religious conservatives.

Now the European Union project lies in tatters and Erdogan trades barbs with the United States over Syria on a near daily basis. Unemployment is above 10% and rating agency downgrades have battered the lira.

As unlikely as cooperation with his former confederates seems, an alliance with the fiercely secular CHP appears possible, if precarious. Saadet champions conservative social mores and is deeply wary of the West. Asked whether Turkey’s constitution should remain secular, Karamollaoglu demurred, quoting Erbakan, who said that secularism is not a Turkish concept.

But Karamollaoglu said the two parties are not so estranged and pointed to Erbakan’s role in a CHP-led government in the 1970s. “The CHP’s emphasis on social justice is also one of our musts. Justice is paramount in Islam, and without it, nothing else follows. [CHP] voters carry some concerns about us, but we can eliminate those [because we see] freedom of religion as a cornerstone to social justice,” he said. “People should live as they believe. Women who want to cover their heads can cover, those who don’t won’t. This is a universal right.”

This more moderate embrace of political Islam is aimed not just at outsiders, but to Saadet’s own ranks, especially the young voters who are increasingly educated, urban and middle-class, said Mahcupyan, who has researched the changing demographics of pious Turks. “There has been a great deal of sociological change in the conservative world over the past two decades. This isn’t a change in religion but a redefining of religiosity, and the children of Saadet voters are part of this,” he said.

“But right now, politics so overwhelm everything else, I believe we are heading for an election where religion won’t even be much of a factor,” Mahcupyan added.