Turkey’s Islamist Saadet, or Felicity Party, has flown largely under the radar, but its new moderate line may build a force to be reckoned with in 2019. 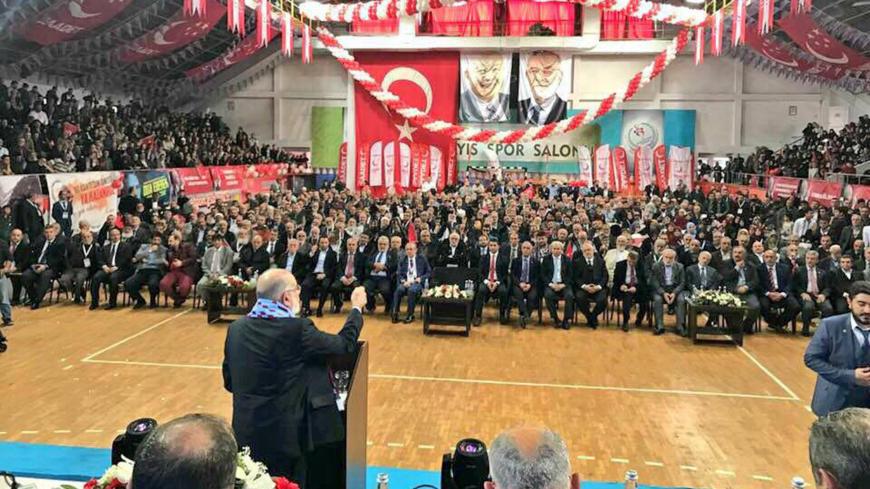 A meeting of Turkey's Saadet Party is addressed by the group's leader Temel Karamollaoglu in a picture posted to Facebook, Nov. 12, 2017. - Gundem Saadet

For outside observers, Turkey’s Saadet (Felicity) Party is hardly a matter of interest. Since the Islamist party's founding in 2001, its mandate has never risen above 2% of the national vote. However, in Turkey’s ever fluid politics, Saadet is gaining a new importance that may prove politically significant. It could present a more moderate Islamic alternative to President Recep Tayyip Erdogan and his ruling Justice and Development Party (AKP).

The idea may sound odd, because in the early 21st century, it was not Saadet but the AKP that was the more moderate face of Turkey’s political Islam. Both parties were rooted in Turkey’s old school Islamism, which was led for decades by the late Necmettin Erbakan. Erbakan had always promoted a pan-Islamic foreign policy and a “just order” at home with Islamist themes such as an “interest-free” economy. When Erbakan’s coalition government was forced from power by the military in 1997, however, the reformist wing of his party broke up and founded the Justice and Development Party in 2001. It came to power only a year later and dominates Turkish politics to date. Meanwhile, Erbakan loyalists gathered in the Felicity Party, which survived as a small and dull vestige of the old Islamist line.

However, things have changed in Turkey quite dramatically in the past few years. The AKP abandoned the reformism of its early years, clung to power and began to establish an authoritarian regime, particularly after the failed coup of June 2016. Saadet, to its credit, did not join this drive. Quite the contrary, especially under its new leader Temel Karamollaoglu — a 77-year-old, mild-tempered, smiling engineer turned politician — Saadet began to voice a mild opposition, with Islamic references, to Erdogan and his government.

One of the themes Karamollaoglu repeatedly emphasizes is the blatant injustice of the post-coup crackdown. “Foundations are being closed down, scholars are being arrested,” he recently tweeted. He added, “What is their crime? To be in the opposition, to criticize the government.” Over the past year, Karamollaoglu has raised many similar criticisms toward the government’s authoritarianism and intentional deepening of the polarization of society, giving him sympathetic ears in the mainstream media and even secularist newspapers such as Sozcu.

Another rising Saadet star is Ali Aktas, a lawyer from Antalya who heads the party's political affairs. He recently became famous for a legal case in which he freed more than 1,000 people from jail. All these people had been arrested because of using a coded online chat application called ByLock. The government claims that the app was specifically designed and used by followers of exiled cleric Fethullah Gulen for covert communications about various crimes, including the failed military coup. Aktas proved that more than 11,000 people had downloaded the ByLock app to their phones inadvertently, rendering the accusations against them invalid, even by Turkey’s current legal standards. This incident, which attracted little notice outside of Turkey, was hailed in the Turkish media as a legal victory against at least some of the excesses of the nationwide purge.

Since then, Aktas has become one of the public faces of Saadet, emphasizing that the party stands for justice and virtue rather than revenge and power. His calls include themes like making peace with secularists, ending Turkey’s toxic polarization and establishing freedom and justice for all.

One should be clear: Saadet is not a party with a liberal worldview, and it certainly has very conservative values about social life. It is suspicious toward the West and is coming from a political tradition with unmistakably anti-Semitic tones. But the party ideology seems to be changing for the moderate. More importantly, it has the potential to appeal to a broader segment of religious conservatives and give them a new political language.

This is a crucial matter, because the continued electoral successes of Erdogan and his AKP are made possible mainly by their unbreakable bond with Turkey’s religious conservatives, which make up at least half of society. Before the AKP, this religious majority was often marginalized, ridiculed and at times oppressed by Turkey’s old elite, the secularists who followed the footsteps of Turkey’s founder, Mustafa Kemal Ataturk. Erdogan is the only leader in a century to successfully overthrow the old guard and win his base power, wealth, glory and even revenge. Many conservatives are now intoxicated with this newfound power, and they are devoted to supporting the leader who made this possible.

Yet some religious conservatives are discontent with becoming just like the elite they defeated and worry that Turkey’s growing isolation from the West will cost it economically. According to various observers, this more educated segment of conservatives explains why Erdogan got far fewer votes than he hoped for in the April 2017 referendum for sweeping constitutional amendments.

These disaffected religious conservatives may be wary of the AKP, but they will never vote for its secular rivals, such as the main opposition Republican People's Party. But Saadet may be the venue to attract them and sway the 2019 elections, suggested Mehmet Ali Kulat, a religious conservative himself who runs a polling company.

There is even speculation that former President Abdullah Gul may ally himself with Saadet and run against Erdogan in 2019 as Saadet’s presidential candidate. It could be a game changer, for Gul is still very prestigious among moderate religious conservatives as well as other segments in society.

In any case, “the end of history” has not yet come for Turkey, and there are new possibilities on the horizon. Saadet seems to have major potential to become a pivotal actor, if used wisely.