The National View, the pioneer movement of political Islam in Turkey, has joined the opposition in its efforts to unseat President Recep Tayyip Erdogan in next month’s elections. 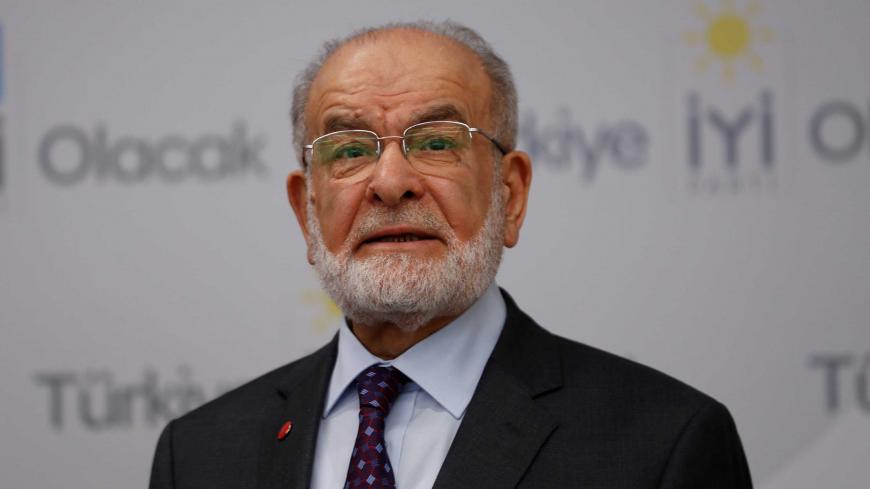 In Turkey’s snap presidential elections next month, the incumbent, Recep Tayyip Erdogan, faces a challenge, among several, from the very quarters that propelled him to political stardom in the late 1990s and early 2000s. The National View, the movement that pioneered political Islam in Turkey, has fielded a presidential candidate, Temel Karamollaoglu, to oppose Erdogan, and the Felicity Party that Karamollaoglu leads has allied with major opposition forces for the parliamentary elections taking place the same day, June 24.

The Felicity Party got less than 1% of the vote in the last elections, held in 2015, and although its popularity has since increased, it still polls well below the 10% threshold required to enter parliament as an individual party. Yet in the close parliamentary race that pollsters are predicting, the Felicity Party is seen as a critical player, capable of tipping the scale in the opposition’s favor by attracting pious Turks and Kurds disillusioned with Erdogan’s rule.

In the opposition’s unprecedented efforts to unite against Erdogan, Karamollaoglu adds an Islamic voice to a motley chorus of critics who accuse Erdogan of trying to cement one-man rule, polarizing society, mismanaging the economy and enabling corruption and nepotism. Courteous and mild-tempered in nature, Karamollaoglu, a white-bearded septuagenarian, has been blunt and pungent in his criticism, drawing sympathetic ears even among staunch secularists averse to political Islam.

The newfound spirit of solidarity is not, however, without controversy. For many secularists, Karamollaoglu's name conjures the massacre of 33 intellectuals in Sivas on July 2, 1993, during an Alevi cultural festival attended by prominent leftist figures. The victims perished when an Islamist mob set their hotel on fire after a steady buildup of tensions. The crowd that had assembled after Friday prayers chanted, “Sivas will be the grave of secularists.” Before torching the hotel, some in the crowd tore down a statue erected as part of the festival.

Karamollaoglu, the city’s mayor at the time, faced accusations of not having done enough to prevent the tragedy. Some claim the language he used in a speech intended to calm the crowd had instead further inflamed it. Karamollaoglu rejects the accusations, arguing that he had no authority over the security forces, whose failure to stop the mob is shrouded in even greater controversy. The Alevi writer Murtaza Demir, who survived the mayhem at the hotel, believes that critics may be misjudging Karamollaoglu’s role that day.

“I remember Karamollaoglu on top of the bus,” Demir told Al-Monitor. “He was telling the crowd that they had achieved their aim and should now disperse. He was referring to the demolition of the statue. Probably he, too, was against the statue, and [its demolition] was in line with his wishes. Yet, one has to be fair and decent. You cannot take this to mean a call … to burn people. I cannot analyze Karamollaoglu’s inner world, of course, [but] his unity with the protesters ended with the removal of the statue.”

A quarter of century later, Karamollaoglu is back in the spotlight, but with a very different posture. With a fist in the air, he has told Erdogan, “Palaces and sultanates will one day crumble.”

Karamollaoglu has been a key figure in efforts to unite the opposition. He was the mastermind behind the idea to put forth a joint opposition candidate in the presidential race. The parties failed to reach a consensus, with each nominating its own candidate, but they managed to hammer out an alliance for the parliamentary polls.

Karamollaoglu announced his bid for the presidency May 1 at an event that offered a vivid reminder of his Islamist worldview. In the gender-segregated venue, almost all the female participants wore headscarves.

Asked about the segregation, Ebru Asilturk, head of the Felicity Party’s women's branches, told Al-Monitor, “I see nothing to be criticized here. Engaging in politics through methods in line with our faith and values boosts the participation of women. It is their choice. This is not something that bars us from politics. On the contrary, it is a productive environment that enables us to work more comfortably.”

Standing out in the men’s section were National View co-founders Recai Kutan and Oguzhan Asilturk, in attendance to support Karamollaoglu. In the 1990s, an observer at such a meeting would have seen Erdogan, then the mayor of Istanbul, seated on the front row. By 2002, however, Erdogan claimed to have “taken off the National View shirt” in favor of a moderate conservative ideology. Together with Abdullah Gul, who later became president, Erdogan led a splinter group that broke ranks with the National View and set up the Justice and Development Party (AKP), which came to power in November 2002. Sixteen years later, the old guard is mounting a challenge to thwart Erdogan in critical polls that will mark Turkey’s formal transition to a governance model concentrating power in the hands of the president.

Given the shared roots of Karamollaoglu and Erdogan in political Islam, how do their pledges differ? Compared with Erdogan’s hard-line nationalist rhetoric, Karamollaoglu’s nomination speech contained messages embracing the Kurds. He pledged to lift the state of emergency in place since the botched coup attempt in July 2016, highlighting the plight of tens of thousands of people dismissed from their jobs in post-coup purges with little regard to due process. He emphasized justice and societal peace and pledged solutions to Turkey’s economic woes. Yet his pledge to stamp out corruption drew the biggest applause.

Karamollaoglu calls the AKP the “government of five Ys” — corruption, poverty, plunder, sycophancy and nepotism, all of which in Turkish begin with the letter Y. He pledges instead rule by the “five As” — reason, morals, justice, dignity and commitment.

The emphasis on justice and morals reflects the indignation that many conservatives feel toward what they see as the rampant corruption and nepotism in the AKP's ranks. The pledge of “reason” pertains to diplomacy and comes with sharp criticism of the AKP’s foreign policy, especially on Syria.

Despite differences between the opposition parties — the others being the Republican People’s Party (CHP), the Good Party and the Democrat Party — they remain united around a fundamental pledge — to ditch the new presidential system, approved narrowly in a disputed referendum last year, and restore the parliamentary system.

According to political scientist Ahmet Murat Aytac, dismissed from Ankara University in the post-coup purges, conservative voters’ visions for Turkey’s governance system will ultimately determine how they vote.

“Voting for Erdogan will mean consolidating the new [presidential] system,” Aytac told Al-Monitor. “The other side, meanwhile, intends to restore the parliamentary system. Voters who share the same worldview and lifestyle will be making a decision on which political format is best for them — the presidential system or the parliamentary one.”