Turkey’s municipal polls are still two months away, but the opposition is already alarmed over possible vote manipulation. 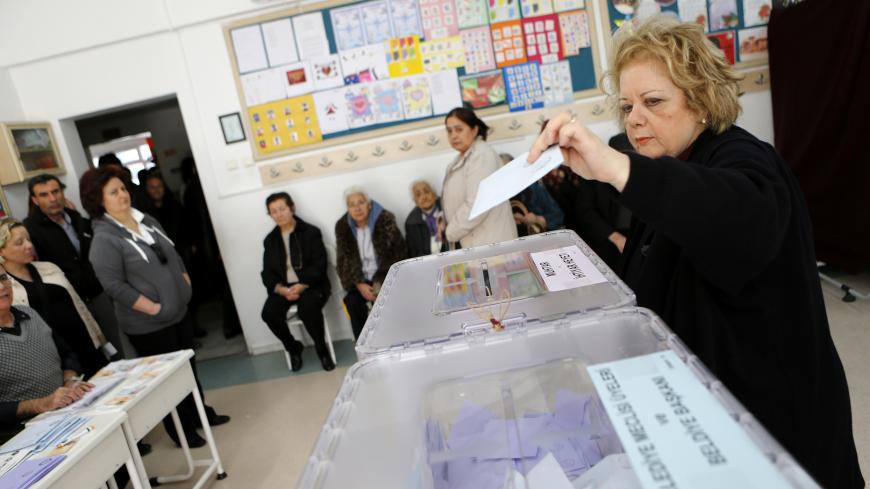 A Turkish woman casts her vote as others wait in line at a polling station in Ankara, March 30, 2014. - REUTERS/Umit Bektas

Turkey’s local elections are still two months away, but their integrity seems to be already under a cloud amid claims of legal violations and voter registration manipulation. Opposition politicians warn that tensions over foul play could boil over beyond local administrations and plunge the already polarized country into chaos.

Unlike previous local elections, the significance of the March 31 vote is not only about who controls town halls. Both the opposition and the ruling Justice and Development Party (AKP) see the vote as the first electoral test of the executive presidency system, which took effect after last year’s presidential and parliamentary polls. The municipal elections come amid economic turmoil, which, according to pollsters, is eating into the AKP’s popular support. Some suggest that the AKP’s loss of big cities, especially Istanbul and Ankara, could turn up pressure on the government and spark calls for early general elections.

In an alignment mirroring last year’s elections, the AKP has teamed up with the Nationalist Movement Party (MHP) for the municipal races. In the opposition camp, the main opposition Republican People’s Party (CHP) is again in partnership with the Good Party, while the Kurdish-dominated Peoples’ Democratic Party (HDP) is running on its own.

In a political atmosphere long fraught with tensions, the AKP-led bloc has framed the election outcome as a matter of “survival” for Turkey. Good Party leader Meral Aksener has perhaps best summarized the climate, saying, “We are going to local elections, but when you look at the rhetoric [of the AKP-led alliance], one might think we are going to war.”

Moves casting doubt on the integrity of the polls are only adding to the tensions. The first controversy flared in December, when a government-sponsored bill extended by a year the tenure of the chairman and five members of the Higher Electoral Board (YSK), which organizes and oversees the elections. Their original tenure was to expire in January, meaning that new members would have been in charge of the local polls. The extension sparked concerns about the government’s intentions since the YSK’s credibility was already badly damaged in the 2017 constitutional referendum, when the board made a last-minute decision to accept ballots unstamped by electoral authorities, which, many believe, allowed for manipulation that tipped the tight outcome in favor of the government.

Many legal experts say the tenure-extension bill is unlawful. Omer Faruk Eminagaoglu, a former prosecutor at the Appeals Court, told Al-Monitor that the constitution precludes amendments in electoral laws within a year before elections. Hence, he argued, the term of the YSK members has legally expired and all their decisions are now invalid.

The board, however, remains in charge, fanning fresh controversies with its decisions. Earlier this month, the YSK barred several small parties from contesting the elections, including the left-wing Labor Party, which faced similar bans in the last two elections despite being able to run in previous ones.

Labor Party chairwoman Selma Gurkan told Al-Monitor the party had launched legal proceedings against the decision, which she denounced as unlawful and unfair. Two other socialist parties were barred from the polls, in which 13 parties will run.

The sidelining of parties could bear also on the fairness of the vote because disqualified parties cannot assign observers to polling stations. In other words, the YSK’s decision effectively weakens opposition oversight of voting and counting.

According to voter rolls released by the YSK, some 57.1 million people are eligible to vote March 31. As opposition parties examined the lists, they came up with some disturbing findings. The CHP said it had spotted 6,000 voters aged over 100, including some who were first-time voters.

The number of voters has increased about 2% since the June 24 elections, but according to CHP parliamentary whip Ozgur Ozel, the increase can be observed only at certain polling stations.

Other figures appear outright implausible. According to the HDP’s findings, 1,108 voters are registered in a single home in Hakkari in the Kurdish-majority southeast. In the same region, two homes in Mardin and Bingol have 506 and 224 voters respectively. The HDP’s list of suspicious voters is rather long, but almost all cases are in the southeast, the party’s stronghold.

But YSK chairman Sadi Guven said Jan. 22, “There are neither duplicate voters nor imaginary and fake voters.” However, few seemed convinced.

Even President Recep Tayyip Erdogan appeared annoyed, claiming that 504,000 of the AKP’s 10 million members did not figure in the voter rolls. Still, AKP and MHP lawmakers made sure to vote down an HDP motion seeking a parliamentary probe into voter registries.

“We have so much data [regarding] not only an increase [in voters] but also the removal of some [from the rolls]. There is no explanation as to how an election can become so dubious that early,” he said.

Recalling fraud allegations in both the 2017 referendum and last year’s polls, Bilgen said, “Violating the constitution and flouting international election norms may be seen as commonplace by the AKP, but if the issue of election integrity is be put aside that easily in a country, this will lead to some comparisons. In Africa, there are certain countries that hold elections but no one sees them as democratic. The same goes for [some countries in] Central Asia, where elections are held but no one is lauding their leaders for upholding the rule of law.”

Turkey “is drifting to an utterly different league” on the global ladder of democracy, Bilgen warned. “We are heading toward chaos, where the whole country will be paying a price just because some want to stick to power.”