Using underhanded tactics, Turkish President Recep Tayyip Erdogan is campaigning to become Turkey’s sole and unencumbered leader as his supporters say this will make Turkey soar as an economic and political power. 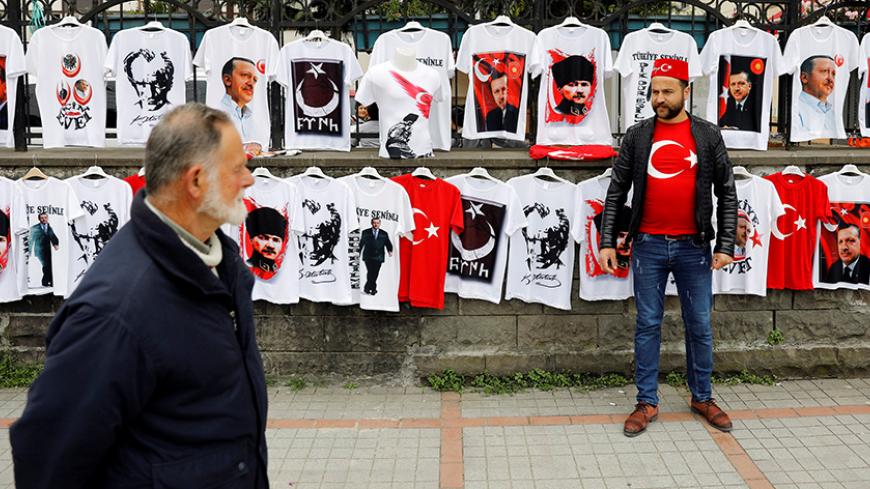 Turkey is a house divided as it heads for the most critical referendum of its history April 16. At stake is the country’s parliamentary system, which has been the foundation of its secular democracy; this, in turn, for all its deficiencies and interruptions, has survived for nearly a century.

The ruling Justice and Development Party (AKP) — under the tutelage of President Recep Tayyip Erdogan, even though he is constitutionally prohibited from engaging in party politics — seeks to turn Turkey into a presidential system unencumbered by the checks and balances seen in presidential systems in the West.

The AKP is supported by the right-wing Nationalist Movement Party (MHP) in this endeavor.

If the proposed constitutional changes are adopted, Erdogan will have control over the legislature — which will remain in place, albeit with reduced powers — and the judiciary; a "yes" vote would make him Turkey’s sole ruler.

Erdogan’s opponents say this is a move toward dictatorship. Erdogan’s supporters believe this change is necessary to overcome interminable parliamentary squabbling and ensure stability, saying this would make Turkey soar as an economic and political power.

The uncompromising determination with which Erdogan and the AKP have been pushing for a "yes" vote in the referendum has turned this into one of the ugliest campaigns in the history of the Turkish Republic.

No holds have been barred by Erdogan and Prime Minister Binali Yildirim, who have campaigned for a "yes" vote by unabashedly using tactics that ensured that the playing field was anything but level.

They claimed, for example, that a "no" vote is tantamount to supporting the outlawed Kurdistan Workers Party (PKK), a listed terrorist organization, and the “FETO group,” which Ankara says is another terrorist organization headed by Fethullah Gulen, the Islamic preacher accused of masterminding last year's failed coup attempt.

Kemal Kilicdaroglu, the leader of the main opposition Republican People's Party (CHP), which is spearheading the "no" campaign, complains that all the organs of state have been mobilized by the AKP to push for a “yes” vote, including the use of vast state funds.

Meanwhile, media coverage for opponents of the proposed constitutional changes has been seriously restricted, given that a large portion of the media has been co-opted by the Erdogan camp.

As a result of the prevalent atmosphere of intimidation — aggravated by sporadic violence across the country against those canvassing for a “no” vote — the ostensibly “independent media” have also been cowed to a significant extent, barring a few exceptions.

Meanwhile Erdogan’s acolytes in the media, including state broadcaster TRT, have given maximum airtime for those pushing for the proposed constitutional changes.

Murat Yetkin, editor-in-chief of Hurriyet Daily News, points to another aspect of the less than fair campaign that has been conducted for the referendum.

“Little account seems to be given to the cost of this campaign overload. What’s more, the far fewer ‘no’ banners and posters frequently find themselves removed or torn down by unknown people,” he added.

Social media such as Twitter, Facebook and WhatsApp have provided an outlet for the “no” camp, but individual users can be sought out by the authorities on the grounds that they insulted Erdogan or promoted terrorism with their postings.

The referendum will also be held under emergency rule declared after the failed coup attempt last year, which has seen the imprisonment or dismissal of tens of thousands of alleged FETO supporters, including independent journalists, jurists, academics and bureaucrats.

Meanwhile, the war in the southeast against the PKK, which has forced nearly half a million people from their homes, continues, leaving many wondering how they can vote confidently without looking behind their backs.

The European Commission for Democracy through Law (also known as the Venice Commission), which is attached to the Council of Europe that Turkey is a member of, underlined these defects in a report it released March 13.

Erdogan, however, remains undeterred. His current line at rallies for a "yes" vote is to accuse Kilicdaroglu of consorting with coup plotters on the night of the failed coup.

Yetkin said these statements make it seem as if the referendum is not about constitutional changes that will concentrate all power in one hand, but rather about undermining the personality of the main opposition leader.

He pointed to Erdogan and Yildirim's confidence that they will win the referendum, and asked, “Why all this worry if ‘yes’ has already won?”

The answer might be that Erdogan will not be satisfied with a slim margin. He wants a strong win in order to make his executive presidency considered to be fully legitimate in the eyes of the world. A result around the 50/50 mark would undermine his claim to be the president of the whole nation.

Meanwhile, opinion polls, which have proved to be unreliable in advanced democracies let alone Turkey, are all over the place, with some showing a strong win for Erdogan, and others predicting he will lose.

The latest polls show a win for Erdogan by a slim margin, but there are pollsters who are staking their careers and reputations on a win for the "no" camp.

Meral Aksener, a rising star on the right wing who was expelled from the MHP for opposing the constitutional changes, has no doubts that the “no’s” will carry the day with a strong margin.

“If the result is ‘no,’ then the president will not be able to obstinately oppose the will of the people,” Aksener, who has faced major hurdles — including violence — during her campaign, told a private network. She was clearly intimating that Erdogan will have to review his whole political stance in that case.

Some political analysts predict that the electorate will repeat the pattern of recent elections and vote along party lines, rather than on the merits or demerits of the proposed constitutional changes.

Hurriyet columnist Abdulkadir Selvi, who stands close to Erdogan, for example, points out that the AKP’s conservative female voters will support Erdogan not matter what, in the belief that this is the only way to protect their gains under him, especially with regard to Islamic dress.

Erdogan is also relying on a strong turnout from expatriate Turks in Europe, who represent 5% of the total electorate and who admire his vitriol against European leaders.

Many argue that whatever the outcome of the referendum, Erdogan will opt for early elections, prior to presidential elections in 2019, to consolidate his position in parliament, which will continue to function even if the constitutional changes are adopted.

With strong support in parliament, Erdogan could push for legislation that ensures he stays in power for longer than the two five-year periods allowed for presidents.

If the proposed changes are adopted April 16, they will not come into force until 2019, according to the rules. But it is generally thought that this would not prevent Erdogan from exercising executive powers. He is already using such powers under emergency rule, which appears set to remain in force as long as he desires.

The bottom line is that Erdogan is not going anywhere regardless of the outcome of Sunday’s referendum. He will be around until 2019 at least, and with a majority in parliament he can ensure that he is in power for the next decade, barring extraordinary developments beyond his control.

There is no doubt, though, that a “no” vote will shake him politically. Whether it would force him to become an impartial president, as called for by the current constitution, and recalibrate his divisive policies in favor of more inclusive ones remains an open question.

Knowing Erdogan, if he were to do so, he would clearly be acting against his nature.