Turkish President Recep Tayyip Erdogan’s blustering toward the West seems to have run its course with the exhausted Turkish public; however, it still works to coax Justice and Development Party elites. 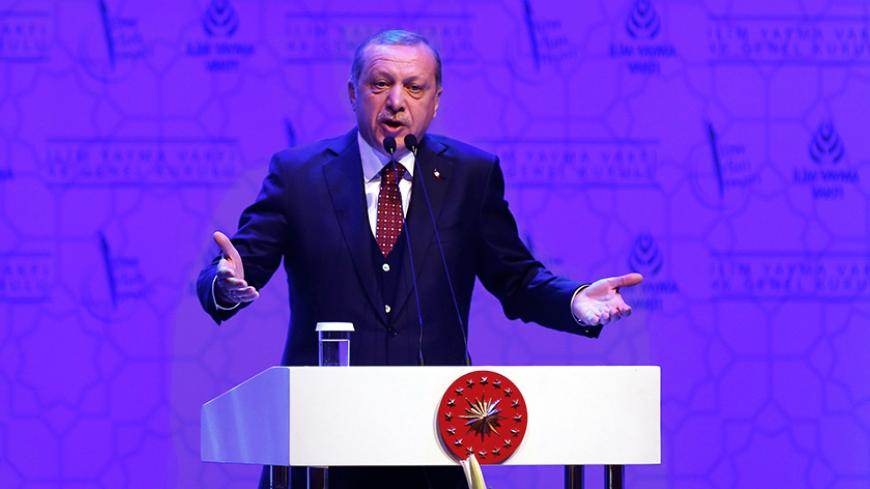 What's behind the embarrassing shenanigans of the Justice and Development Party (AKP)? What's the reason for President Recep Tayyip Erdogan's angry outbursts?

On March 22, just a few hours before the London terror attack, Erdogan appeared on live television and harshly criticized the West. He said, “Turkey is not a country you can pull and push around, not a country whose pride you can play with and turn its ministers away from the border. [It's] not a country whose citizens you can drag on the ground. These developments are carefully followed around the world. If Europe continues this way, no European in any part of the world can walk safely on the streets. If you open this route, you [the West] will suffer the most.”

Yet when Reuters tweeted Erdogan’s statement after the attack, the pro-AKP newspaper Yeni Akit expressed its outrage and claimed that Reuters was insinuating that Erdogan was responsible for the attack.

This was just the latest mind-boggling and erratic act from the AKP and its ultranationalist coalition, which continues to rage against the West, in particular the European Union. Al-Monitor has reported on the details of the intense row between Turkey and the Netherlands and Germany.

In Turkey, the popular images and news coverage surrounding the conflict with the Netherlands and Germany have been out of control. For example, 40 cows were sent back to the Netherlands in protest, and young men have posed with sharp knives "murdering" tulips and squeezing oranges. Out of this public outrage, some comical images also surfaced, like protesters burning the French, not Dutch, flag. A prankster called a police station in Rotterdam, New York, rather than the Netherlands, and trolls mistakenly tweeted threats to French President Francois Hollande. Young men in Gumushane province even greeted the Turkish prime minister on horseback carrying a sign that read: “Dear prime minister, allow us to ride our horses upon the Netherlands.”

Turkish Minister of Family and Social Policies Fatma Betul Sayan Kaya, who was deported from the Netherlands, has repeated her story to the Turkish public, adding details to it with every telling. She complained that during her four-hour wait outside the Turkish Consulate in Rotterdam, the Dutch authorities did not even give her water, only to later claim that she had turned down the police officers' offer of tea.

She said the events of the night made her relive the July 15 coup attempt. She was willing to die at the border had Erdogan not asked her to come back. Social media users ridiculed Kaya's embellishments, which included her claim that she heard the Dutch police loading their guns. Even if Kaya's statements are accurate, most of the Turkish public remains skeptical, given their previous experiences with the pro-government media’s manufactured grievances, in particular their bogus report of a secular group attacking a headscarf-wearing mother during the 2013 Gezi protests.

Kaya’s increasingly alarming story of being victimized by Dutch police was backed by Erdogan’s blustering and relentless EU-bashing. Erdogan suggested that Turks in Europe should have at least three to five babies, as they are the future of Europe. He also offered legal assistance to Muslim women in Europe.

Erdogan and Foreign Minister Mevlut Cavusoglu even directed threats to the EU that they may end the refugee deal. This threat even attracted the attention of the United States. Conservative commentator Ann Coulter tweeted, “Turkey's Erdogan threatening to send Europe 15K refugees a month. So even Muslims consider Muslim migrants a threat.”

These are just a few of the scandalous events from the past 10 days, and besides being foreign policy disasters, they are also embarrassing moments for Turks and Turkophiles everywhere. Why won't Erdogan stop embarrassing his country? The most frequently repeated explanation is that these ultranationalistic blunders are intended for domestic consumption and to sway undecided voters in the upcoming referendum. Erdogan’s efforts to destroy ties with the West are more about telling the AKP’s base to fall in line rather than winning over swing voters. This means Erdogan is concerned that significant portions of the AKP base will vote "no" in the referendum and that they will not be able to effectively guarantee his desired executive presidency.

The initial polls are not promising for the referendum's "yes" camp. During the preliminary vote on the referendum in parliament in January, AKP members were forced to display their "yes" votes, even though the constitution mandated a secret ballot. On April 16, can Erdogan trust his own parliamentarians to vote "yes" and to mobilize their own constituents to fall in line?

Erdogan rushed into the referendum, hoping to ride the wave of national unity that overtook the public following the July 15 coup attempt. In view of the AKP and the Nationalist Movement Party's (MHP) number of supporters, Erdogan and his men initially envisioned the referendum passing with at least 60% approval. It has been an open secret in Ankara that more than 100 AKP lawmakers would vote "no" on the referendum. Several senior bureaucrats fear that in the institutional restructuring of the presidency they will lose their positions.

So far, the AKP has not been able to tackle the political wing of the Gulen movement. Prime Minister Binali Yildirim hastily passed the buck to the National Intelligence Organization (MIT), saying in an interview with the Turkish press, “I asked the MIT to tell me the names of lawmakers and politicians who are members of the organization. They said there is no such thing. If they are hiding information from me, they will pay the price.” Yet not many in Turkey were convinced that this was the MIT’s complete answer on the matter. The MIT is known for its detailed reporting on even minor issues. Plus, Ankara corridors, as well as social media, have been rocked by traces of AKP infighting, which has seen senior members accuse each other of being CIA spies or Gulen movement members.

Disarray inside the AKP has been so intense that Erdogan had to announce that, once the amendments are accepted on April 16, he would immediately become the leader of the party and that he would not wait until 2019 to assume the party leadership. This measure did not generate enough support among the AKP. So on March 20, Yildirim gathered former AKP ministers to join the campaign to rally for a "yes" vote. The former ministers issued serious criticisms about the amendments and the timing of the referendum, and they urged the government to soften its rhetoric and reassess the cost of an alliance with the MHP.

Yet as Yildirim told the former AKP ministers, the referendum on amending 18 articles of the constitution has now evolved into a vote of confidence for Erdogan. Despite all of Erdogan’s pleas, AKP elites fear that the proposed presidential system will only decrease their already dwindling administrative powers and increase the arbitrariness of the system. For most of them, the proposed change is more risky than the status quo. Erdogan and his immediate circle know this well, so the battle now is to coerce these elites to fall in line. One way is to make sure there is nowhere to run. Hence, Erdogan's strategy is that offense is the best defense. Erdogan, by using erratic rhetoric, is observing who will be a partner in sullying Turkey’s reputation. So far, AKP elites are competing to prove their loyalty. For example, on March 20, Bulent Tufenkci, the customs and trade minister, told the press that if the referendum doesn't pass, there will be chaos in the economy. But if the risk is so high for the precarious economy, why did the government insist on such a referendum?

There is a poignant caricature that may explain why Erdogan will not stop embarrassing his country. In it, Erdogan says, “The people of Turkey are behind me,” and the people are pictured behind bars. That's the situation of the AKP elite. To win, Erdogan not only needs their votes but their dedication. Turkey’s reputation is part of that price.