The Council of Europe’s decision to resume monitoring procedures against Turkey indicates the West's resolve not to validate Ankara's referendum results. 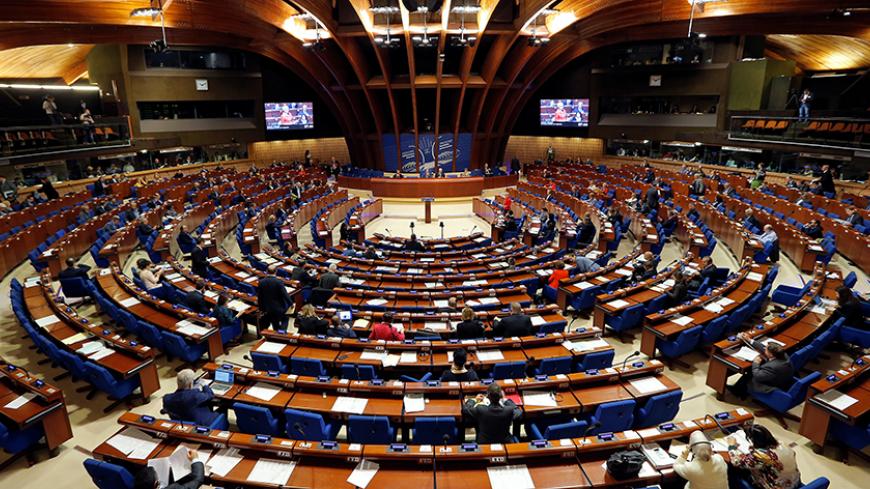 Turkey is back on probation. That's what happens when a country behaves badly in the eyes of the Parliamentary Assembly of the Council of Europe (PACE).

After the government's questionable conduct during the recent voter referendum on constitutional amendments, PACE passed a resolution 113-45 (with 12 abstentions) on April 25 in Strasbourg, France, to reopen monitoring procedures on Turkey that had been closed since 2004. But alleged election fraud is just the most recent of President Recep Tayyip Erdogan's actions to catch the council's attention. Members also cited Erdogan's iron-fisted crackdown on his opponents, journalists and human rights in general since an attempted coup in July.

Unless the election is successfully contested, the Turkish presidency will be granted unprecedented powers that some critics say will fulfill Erdogan's longtime dream of an imperial presidency. The constitutional amendments would endow Erdogan with powers enjoyed almost exclusively by absolute monarchs. But reports from the Organization of Security and Cooperation in Europe (OSCE), whose election-watching mission included PACE observers, indicate Erdogan's victory was almost surely fraudulent.

Even the group's pre-election report found that the amendments' opponents were harassed and intimidated, and their campaign rallies were banned or interfered with by a heavy police presence. Erdogan's reaction to the findings? “Mind your own business.” The irony is, it indeed was OSCE-PACE's business. The joint mission’s mandate — at the invitation of the Turkish government, no less — was to observe campaign conditions.

In the meantime, the Council of Europe's decision to monitor Turkey is probably just the first big bill the country is likely to receive because of the alleged fraud. If Turkey hopes to change its current path and gain Western acceptance in the long run, its confrontations and questionable ethics won't help. In fact, Turkey is likely to be treated as a “pariah state” by international and Western organizations.

Turkey has been a PACE member since 1949. Its removal from monitoring status in 2004 had opened new and promising vistas for it in the European Union, which immediately began membership negotiations with Ankara.

But being monitored again, in European eyes, means Turkey has been sent back to a remedial level, which it held between 1996 and 2004. It's the only country ever to be monitored and cleared, then returned to monitored status. It has been relegated to the status of "second-class democracy."

Mikko’s assessment on Turkey’s referendum already has been reported by Diego Cupolo in The Atlantic's “What Turkey’s election observers saw.” She said, “By European standards, those ballots needed to be, in fact, invalid." She cited alleged intimidation and last-minute changes to voting procedures, as well as general oppression in Turkey since the attempted coup. Those problems mean Europe will need to "toughen its rhetoric" with Erdogan, she told Cupolo.

OSCE's observers also referred to a “lack of equal opportunities, one-sided media coverage and limitations on fundamental freedoms created by an unlevel playing field.” Its wording “unlevel playing field” became an international motto for describing the circumstances of the referendum.

OSCE has recommended a recount. In eight weeks it will release an official review of the voting process. EU leadership, including Jean-Claude Juncker, president of the European Commission; Federica Mogherini, its vice president and the EU's high representative for foreign affairs and security policy; Johannes Hahn, commissioner for enlargement; and even the US State Department are all awaiting the final OSCE report before taking a stand on Turkey’s alleged fraud.

For Hahn, the current state of Turkey's relations with the EU is “not sustainable.” He termed the election and the constitutional amendments a “dangerous step backward for democracy.” How to deal with Turkey will be on the agenda of the EU foreign ministers meeting April 29 in Malta. Hahn's wording is almost the same as that used in the Venice Commission report issued before the referendum.

Erdogan has placed Turkey on a collision course with European institutions. The referendum did not become the opportunity for coronation he had envisaged. Winning by a slim margin of 51% was far from the 60% he had targeted. He did project his well-known pragmatism when, two days after the vote, he described the election using soccer terms in a CNN interview: “It doesn’t matter if you win 1-0 or 5-0; the ultimate goal is to win the game.”

Actually, it does matter — and it did matter for him. There seems little doubt that the election was rigged. The results are being contested by thousands of protesters taking to the streets in Istanbul, Ankara, Izmir, Antalya and a number of other major cities. Reports leaked from his inner circle said the loss of Istanbul disturbed him more than anything else.

Might his victory actually have been a defeat? Erdogan's political ascent started in 1994 when he surprisingly was elected as Istanbul's mayor. Ever since, he has victoriously marched through every election cycle — the only exception being June 7, 2015 — and he managed to transform that outcome into a huge victory in a rerun election he demanded only five months later. Istanbul has enormous symbolism for him. In a fraudulent election, losing Istanbul might resonate as his descent — the beginning of the end.

Other than his one statement in the CNN interview, he hasn't appeared triumphant. Even more than a week after his “victory,” he looks grim. He is tense and conspicuously not jubilant. His main concern, even more than the domestic resistance and ongoing protest marches in Turkey's major cities, is the reluctance of international organizations to acknowledge the referendum results' legitimacy.

The next stage in the problematic relationship between Turkey and Europe is likely to be the European Court of Human Rights (ECHR), which is also an institution of the Council of Europe. There are scores of complaints lodged against Turkey. In many of those cases, it won't be surprising if the ECHR condemns the government.

In addition, as no one speaks anymore of the Turkish judiciary's independence, and as Turkish courts have rejected all the opposition’s applications regarding the referendum, the issue of election fraud is likely to end up before the ECHR as well.