Where does referendum leave Turkey's ties with West?

Experts expect more trouble between Turkey and the United States and Europe in the coming period, but will it lead to a complete breakdown in ties? 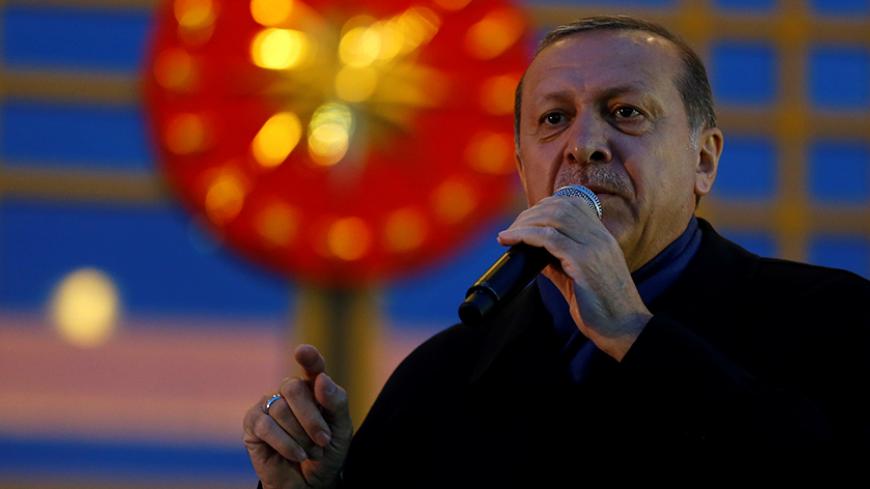 Those results gave President Recep Tayyip Erdogan a weaker victory than he expected but still validated what Europeans fear will be his authoritarian rule.

Nevertheless, experts whom Al-Monitor spoke with say Turkey-EU ties will not be severed in the way some on both sides of the fence are calling for. They add that the “unhappy relationship” will continue to muddle along because of vital interests.

Turbulence in Turkey’s relationship with the United States is also expected to continue, despite the fact that President Donald Trump was the only Western leader to congratulate Erdogan on his referendum victory. But few expect a serious breakdown in these ties, too.

Erdogan, by his own admission, was expecting up to 60% support for the constitutional amendments that are to replace Turkey’s parliamentary system with an executive presidency free of the checks and balances seen in Western democracies.

Such a support ratio would have disarmed domestic and international criticism about his authoritarianism, enabling him to say he is the choice of the people. Given the outcome, where one person in two rejected his executive presidency, this claim has been seriously undermined.

In their first comments about the results of the referendum, European leaders underlined the deep divisions in Turkey the referendum has revealed and called on Erdogan to be a conciliatory leader.

German Chancellor Angela Merkel and Foreign Minister Sigmar Gabriel said in their joint statement, "The tight referendum result shows how deeply divided Turkish society is and that means a big responsibility for the Turkish leadership and for President Erdogan personally."

This sentiment was echoed across the board in Europe, where some leaders vehemently opposed to Turkey’s EU membership bid took the matter further, and said this bid had to be reviewed now.

"We can't just go back to the daily routine after the Turkey referendum. We finally need some honesty in the relationship between the EU and Turkey," Austria’s Foreign Minister Sebastian Kurz said. His country is strongly opposed to a place for Turkey in Europe on cultural and religious grounds.

The Organization for Security and Cooperation Europe (OSCE) also cast a cloud over Erdogan’s referendum victory. In initial comments it said the “lack of equal opportunities, one-sided media coverage and limitations on fundamental freedoms created an unlevel playing field” for the referendum. The OSCE is due to publish a detailed preliminary report on its findings.

The OSCE’s verdict and statements of European leaders appear set to ensure that Erdogan’s anger with Europe — marked by acerbic attacks on European leaders as “Nazis” and “fascists” — will continue for the time being.

His remarks on the night of the referendum and the following day show that he is not done with Europe yet. He brought up two of his pet topics and said he might seek referendums on whether Turkey’s EU bid should continue and whether the death penalty should be reinstated.

Disregarding criticism from Europe, Erdogan has been pandering to calls from his supporters for the death penalty after last year’s failed coup attempt. Responding to chants for this penalty from supporters in Istanbul on the night of the referendum, Erdogan said he would discuss the matter with political leaders, and if that failed to produce results, he would take the issue to the people.

Erdogan seems unperturbed by such statements, or by the OSCE findings about the referendum, which he promptly denounced.

Addressing supporters outside the Presidential Palace in Ankara the day after the referendum, he told the OSCE “to know its place,” adding that its “political report would be disregarded by Turkey.”

Regarding Turkey’s EU bid, Erdogan said, “They have made us wait at the gates of the EU for 54 years. So we will sit and talk and hold a referendum on that too.”

Western diplomats are not convinced by this rhetoric. “If Erdogan goes down that road, many Europeans will be happy,” a European diplomat told Al-Monitor on condition of anonymity.

“The danger for Turkey is that Erdogan is not only heading for a crisis with the EU, but also the OSCE and the Council of Europe, which Turkey has been a member of since their inception,” the diplomat added.

Retired Ambassador Ali Tuygan acknowledges the unpredictability that results from Erdogan’s outbursts against Europe, but doesn’t expect a full severance of ties. “Given vast economic interests, Turkey’s NATO membership and strategic cooperation in other areas, Turkey and the EU can’t risk a total breakdown in ties. This unhappy relationship will continue,” Tuygan told Al-Monitor.

Nevertheless, Tuygan points to continuing accusations by Erdogan about “a European crusade against Turkey” and does not expect ties to improve in the near future. He also lays blame on the European side.

“If it had been more welcoming rather than trying to keep Turkey at a distance, the situation today would have been very different. There is a lack of strategic vision in Europe also,” he said.

A similar picture emerges with regard to Turkish-US ties after the referendum. The call by Trump to Erdogan to congratulate his victory was undoubtedly a morale booster for Ankara.

But the cautious response from the White House and the State Department to questions about whether the referendum was fair is bound to have dampened this enthusiasm.

“My understanding is there’s an international commission that is reviewing this and issues a report in 10-12 days. And so we'll wait and let them do their job,” White House Spokesman Sean Spicer told reporters, refusing to commit himself to a specific position.

“We value the OSCE’s contributions to the promotion of democracy and human rights, and that includes its election observation efforts,” State Department spokesman Mark Toner said in response to a question about the referendum in an April 11 press briefing. “We look forward to the final report,” he added.

Pressed by reporters, Toner said, “We consistently urge Turkey at every level to respect and ensure political freedom, freedom of expression, judicial independence, and other fundamental freedoms.”

Retired Ambassador Faruk Logoglu, who has also served as Turkey’s ambassador to Washington, predicts difficult days ahead for Turkish-US ties.

“Trump’s call to Erdogan to congratulate him could also be read as an effort to calm Erdogan and soften him up a little,” Logoglu told Al-Monitor. “But problems relating to the PYD [Democratic Union Party] in Syria and Fethullah Gulen continue,” Logoglu said. He was referring the fact that Washington is cooperating with the PYD in Syria although Turkey claims it is a Kurdish terrorist organization.

“Trump’s position on Israel and Palestine, his desire to have the Muslim Brotherhood outlawed as well as his [upcoming] statement on April 24 regarding the Armenian genocide issue could also cause problems between Ankara and Washington,” Logoglu added.

Despite these problems, though, Logoglu does not expect a breakdown in Turkish-US ties. “These ties won’t get worse, but they probably won’t get any better either,” Logoglu said.