As municipal elections near, the Turkish president is ramping up his rhetoric against his pro-Kurdish opposition, equating Turkey's third largest party with groups Ankara considers terrorists. 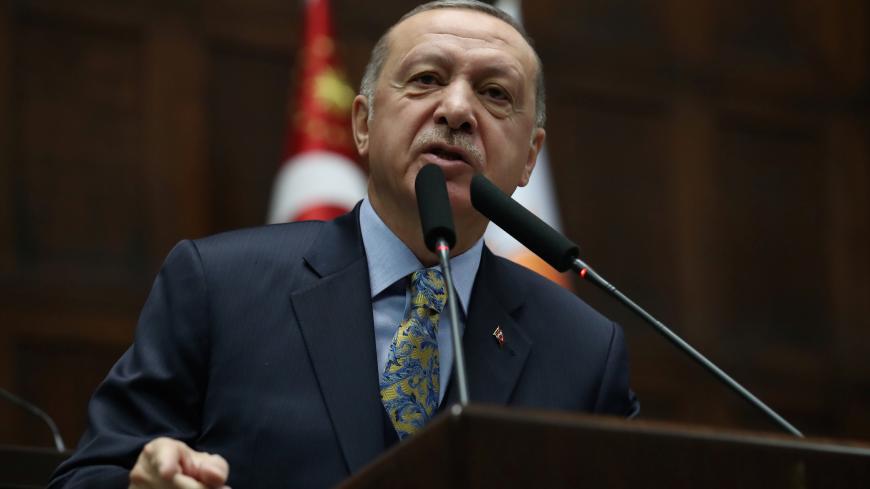 Turkish President Recep Tayyip Erdogan addresses members of parliament from his ruling party during a meeting at the Turkish Parliament in Ankara, Turkey, Jan. 15, 2019. - REUTERS/Umit Bektas

“It's crystal clear and their leaders admit as much themselves,” Erdogan claimed in an interview with Turkish state broadcaster TRT on Sunday. Erdogan added that the Peoples’ Democratic Party (HDP) was no different from the PKK’s Syrian branch, known as the People’s Protection Units (YPG). Both militant groups are classified as terrorists by Ankara.

Erdogan’s wholesale demonization of the Kurdish political movement echoes the rhetoric used by Turkey’s past military-backed coalition governments to justify the shuttering of the HDP’s multiple forerunners on flimsy terrorism charges. It also underscores his tactical alliance with far-right nationalist leader Devlet Bahceli. Erdogan told TRT that he hoped it would endure “till the grave.”

Indeed, the president’s salvos may have been more about electioneering than his latest incarnation as the PKK’s nemesis, a role that has bolstered his standing among the country’s hawkish top brass. Meral Danis Bestas, an HDP lawmaker from the southeastern province of Siirt, said that Erdogan’s claims about the HDP were “risible” and that his real intent was to disrupt potential cooperation between it and the rest of the opposition.

The HDP declared it would not be running candidates in much of Turkey’s largest city, Istanbul, in nationwide municipal elections that are due to be held on March 31.

It will not contest the metropolitan mayorship of Ankara, either. Moreoever, the HDP is backing an alliance between the main opposition Republican People’s party (CHP) and conservative Iyi in the port city of Izmir, which, like Istanbul, is home to a large number of HDP voters. And with the economy, its winning card for the past 16 years, in decline, Erdogan’s ruling Justice and Development party (AKP) is feeling the heat. Some analysts note that the president, who has accumulated unprecedented power by rewriting the constitution, muzzling the press and jailing his opponents, has stacked the system against his rivals and would likely resort to electoral fraud if need be.

Bestas sounded undaunted in a telephone interview with Al-Monitor: “We view the elections as part of the ongoing fight between fascism and democracy.” She declined to comment on whether the HDP had struck a formal deal with the CHP, saying only, “The HDP will work to unseat the AKP in the west of the country and to win with its own candidates in the east.”

That will be a tall order, especially in the mainly Kurdish southeast region, where the government has unseated 80 mayors, the bulk of whom are from the HDP’s sister, the Democratic Regions Party, for supposed terrorist links. Over 40 of them are in prison, “all on bogus charges,” Bestas said.

The HDP remains the third largest party in the Turkish Parliament despite unremitting pressure on its members, with thousands of party officials and eight former lawmakers behind bars. They include the party’s former co-chair, Selahattin Demirtas, who was imprisoned in November 2016 along with former co-chair Figen Yuskedag. He faces up to 144 of years in jail on a deluge of thinly supported terror charges.

On Friday, an Istanbul court convicted Gultan Kisanak, the former co-mayor of Diyarbakir, of a slew of terrorism charges. The bulk of the prosecution’s indictment was drawn from speeches Kisanak gave as a former HDP lawmaker, confirmed Bestas, who was present at the hearing.

The court sentenced Kisanak to 11 years and three months in prison for “membership of a terrorist organization” and to three years for engaging in “terrorist propaganda.” No stranger to state repression, Kisanak was held in solitary confinement and brutally tortured in the notorious Diyarbakir prison after Turkey’s last direct military takeover in 1980.

The court sentenced Sebahat Tuncel, another former HDP co-chair, to 15 years on similar charges even though she was unable to appear in court on health grounds and present a closing statement in her own defense. Tuncel has been on a hunger strike for the past three weeks, part of a wider campaign to protest PKK leader Abdullah Ocalan’s imprisonment conditions.

Rights groups recall that many of the Kurdish politicians committed their supposed crimes when the government was steeped in secret peace talks with Ocalan. HDP lawmakers would pass messages from him to PKK commanders in Iraqi Kurdistan with the government’s full blessing. As such, their labeling as terrorists “is profoundly dishonest,” said Emma Sinclair-Webb, Turkey director for Human Rights Watch. “There is nothing that can be called ‘terrorist,’ let alone criminal activity,” she told Al-Monitor. “Local democracy has been suspended in the southeast with the removal of elected mayors and Kisanak’s conviction is a tragic reminder of what happened in that region and of how anti-terror laws are being abused.”

Cihan Aydin, the president of the Diyarbakir Bar Association, asserted that Kisanak and Tuncel's cases fit a broader pattern whereby the media declares a party guilty even before the trial begins and embellishes stories with false allegations. In Kisanak's case the pro-Erdogan press claimed she was siphoning off municipality funds to the PKK. "None of these lies were mentioned in the prosecutor's indictment. Ms. Kisanak's case is purely political; it's a typical freedom of expression case," Aydin told Al-Monitor.

The peace talks collapsed in 2015 amid a slew of mutual recriminations and Ocalan, 70, has been held virtually incommunicado ever since.

The PKK points to Erdogan’s decision to ally himself with nationalists in order to win his much coveted executive presidency. The government blames the PKK, citing, among other things, the militants’ disastrous decision to mount an armed insurgency within towns and cities across the southeast. The government responded with disproportionate force, leveling entire neighborhoods, killing civilians and displacing more than 355,000 of them, according to the UN Human Rights Commission.

Ocalan was granted his first visit in two years on Jan. 12, when his brother Mehmet traveled to Imrali, the prison island off the coast of Istanbul where he is being held. Murat Karayilan, one of the PKK’s top commanders in Iraqi Kurdistan, dismissed the move as a desperate tactic by the government to end the hunger strikes and to prevent them from spreading.

Leyla Guven, an HDP parliamentarian who stopped eating on Nov. 8, was freed from jail Jan. 25 after her health deteriorated to critical levels. She was being held for calling Turkey’s January 2017 military operation against the YPG in Syria’s Afrin an "invasion." In a letter to the Strasbourg-based European Committee for the Prevention of Torture, which conducts impromptu visits to Turkish prisons, including Imrali, in line with Turkey’s obligations as a member of the Council of Europe, Guven vowed to continue her fast until Ocalan’s isolation came to an end. “Ending Mr. Abdullah Ocalan’s isolation is not a favor but is directly linked to defending the basic principles of human rights and the rule of law,” she said.