The Kurdistan Workers Party (PKK) has dropped plans to convene a congress to renounce its armed struggle after hostile outbursts by President Recep Tayyip Erdogan and government officials. 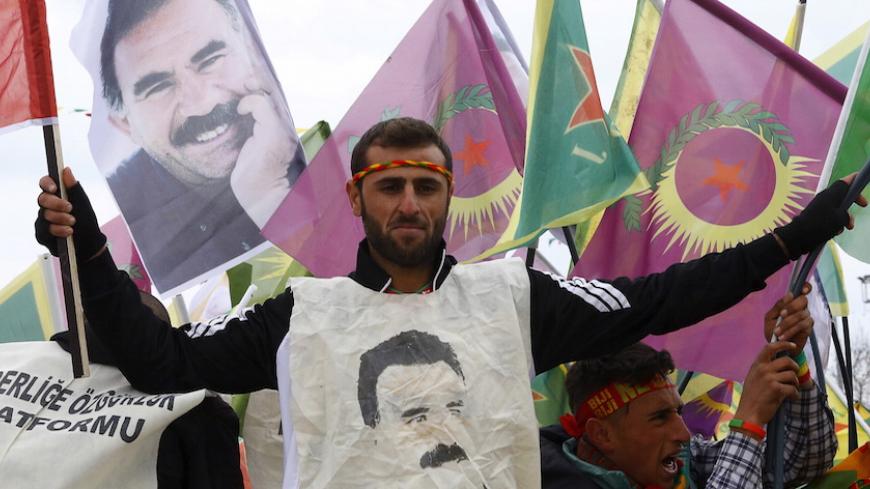 People wave Kurdish flags during a gathering celebrating Nowruz, which marks the arrival of spring and the new year, in Diyarbakir, March 21, 2015. - REUTERS/Umit Bektas

President Recep Tayyip Erdogan’s recent outbursts against the peace process with the Kurds have led to a profound confusion: Is Turkey gearing up for a new war with the Kurdistan Workers Party (PKK) in the run-up to the general elections?

The controversy started when Erdogan raised objections to setting up a negotiating table for the next stage of the peace process, which had hitherto advanced in line with his guidance and with his knowledge. In response, the Kurdish side called off plans to hold a disarmament congress, charging that “Erdogan kicked the table.” The decision was first announced by Muzaffer Ayata, one of the PKK’s founders, and then confirmed by Bese Hozat, co-chair of the executive council of the Kurdistan Communities Union (KCK), the Kurdish movement’s umbrella organization.

Kurdish sources suspect Erdogan could launch an onslaught on the Kurds after the June 7 elections, just as he did after his memorable May 4, 2007, meeting with then-chief of general staff Yasar Buyukanit in the Dolmabahce Palace. The meeting, which still remains shrouded in secrecy, was followed by a ground operation against the PKK in 2008, which yielded no results. In 2009, thousands of Kurds were put behind bars as part of a massive probe into the KCK, even though Turkish officials were simultaneously holding talks with PKK representatives in Oslo.

The new crisis, too, is building up in the wake of a meeting in Dolmabahce. This time, however, the government’s interlocutor was not the army but the Kurdish movement, namely a team of lawmakers from the People's Democracy Party (HDP) involved in the settlement process.

At the Feb. 28 meeting, the HDP team, which has been shuttling between PKK leader Abdullah Ocalan, jailed on the island of Imrali, and KCK leaders based in Iraq’s Qandil Mountains, announced a 10-point road map for the peace process. Speaking in a joint press appearance with government officials, HDP deputy Sirri Sureyya Onder read out the following message from Ocalan: “I invite the PKK to convene an extraordinary congress in the spring to make a strategic and historical decision on the basis of principles on which a basic common understanding is reached [with a view to] renouncing the armed struggle.”

The government sought to sell this statement to the public as an announcement that the PKK was laying down arms, skipping the part about “principles on which a basic common understanding is reached.” According to the Kurdish movement, however, the laying down of arms was an end to be reached in parallel with government steps to meet the 10 points of the road map. In his Nowruz message, read out at a huge rally in Diyarbakir on March 21, Ocalan said, “I deem it necessary for the PKK to hold a congress to end the armed struggle and adopt a strategy concordant with the spirit of the new era, in conjunction with an agreement to be reached on the principles in the declaration.”

The government, however, refrained from any steps on the 10 points, ignoring Ocalan’s condition for “an agreement on the principles,” and kept slamming the PKK for refusing to lay down arms.

According to Kurdish sources contacted by Al-Monitor, Erdogan — with all his strategies aimed at installing a presidential system — was planning to exploit the peace process and Ocalan in the elections, hoping for a supermajority for the ruling Justice and Development Party (AKP) to rewrite the constitution. The HDP, however, frustrated Erdogan’s plan with its decision to contest the polls as a party instead of fielding independents, a move that will result in fewer seats for the AKP if the HDP overcomes the 10% threshold.

Then, opinion polls showed that a settlement process based on the 10 points would not boost the AKP vote as expected, leading Erdogan to kick the negotiating table. A leader who a few years ago boasted of recognizing the Kurdish problem, Erdogan was now denouncing the Dolmabahce deal, the plan for a monitoring committee and full-fledged peace negotiations. He went even further, saying, “There is no Kurdish problem. Arguing the opposite is discrimination and separatism.”

In response, PKK founder Ayata wrote in the Ozgur Gundem daily May 2 that the PKK had called off preparations for a disarmament congress. The decision, he said, was prompted by Erdogan’s statements as well as by the AKP government’s renewed isolation of Ocalan. “Erdogan has directly obstructed the PKK’s convening a congress,” he stressed.

A few days later, Hozat, the KCK executive council co-chair, said on Med Nuce TV that a disarmament congress would not be convened unless a constitutional amendment recognizing the Kurds was passed. The PKK decision to convene a congress was conditioned on the AKP taking steps in line with the Feb. 28 declaration and the Nowruz manifesto, she stressed.

In further remarks, she said: “Since no step has been taken, convening a congress is not currently on our agenda. Let alone negotiations, the dialogue process has been eradicated. No meeting has been possible with our leader [Ocalan] for a month. The PKK was to convene a congress in response to steps by the state. … The PKK cannot hold such a congress before the Kurdish problem is resolved. Without a recognition of Kurdish identity, without a constitutional amendment to that effect and without the acknowledgment of a status for the Kurds, such a congress can never be convened.”

The negotiating table Erdogan had upended was further jolted with Hozat’s statement. It is still premature to say the table has totally collapsed. The PKK’s decision is a double-edged sword that will inevitably spark accusations that the group is unwilling to lay down arms ahead of elections and that the HDP is playing politics in the shadows of an arms threat. Yet, despite dropping the congress plan, the KCK made a statement May 1 indicating it favors the ballot box over the guns. “Far from standing up to Erdogan’s approach, which is destroying the process, the government is adopting attitudes and rhetoric that raise tensions further and could spark provocations and conflict,” the statement said. “The June 7 election will be [a choice] between this policy of the AKP and the HDP’s policy in favor of Turkey’s democratization. Thus, the policies of Erdogan and the government should be exposed and countered and this counter-attitude should be reflected at the ballot box.”

HDP co-chair Selahattin Demirtas also blamed Erdogan for derailing the congress plan, charging he was holding the peace process hostage to his ambitions to become an executive president. Dismissing speculation that the Kurds might declare a de facto autonomy after the polls, Demirtas pledged the HDP would maintain its democratic struggle in line with the principles outlined in its election platform, even if it fails to enter parliament.

Some say the PKK got squeezed between armed struggle and democratic politics via the HDP. A Kurdish source, however, offered the following assessment to Al-Monitor: “[The PKK] feels compelled to take a stand against Erdogan’s manipulation of the settlement process. This is a warning. The Kurdish side is trying to show the public that it remains committed to peace and that Erdogan is the one obstructing disarmament. No doubt, the risk of developments that could end the [cease-fire] is always there, but the PKK is experienced enough to overcome certain provocations. It is capable of managing the squeeze between guns and elections. I don’t expect this decision to have a negative impact on the HDP.”

The PKK’s immediate priority is to see the HDP pass the 10% threshold. Ocalan in particular is eager to see the HDP succeed, having conceived the party as a pluralist democratic platform for different ethnicities in Turkey. The HDP is a key instrument in Ocalan’s peace strategy. Hence, KCK co-chairs Bese Hozat and Cemil Bayik describe the June 7 polls as the most critical election in Turkey’s republican history.

This comes as another indication that the PKK gives priority to democratic politics in Turkey at a time when the prospect of the group laying down arms has grown more distant in other parts of Kurdistan amid regional turmoil and the threat of the Islamic State.

The 550 candidates the HDP fielded in all constituencies across Turkey reflect its effort to become a party with nationwide appeal. The biggest threat to the accomplishment of this objective is the PKK’s potential return to fighting. In this complex equation, Erdogan is employing tactics that push the Kurdish movement to err. Those tactics were at display in Agri last month, when soldiers were deployed to a mountainous area where the HDP was to hold a tree-planting festival in an attempt to spark an armed confrontation with PKK guerrillas who were also present in the area. As long as the arms are there, such traps and the risk of clashes will persist.

Warming up the frozen peace process requires a courageous and cordial new beginning. Is Turkey on the way to peace or war? No one knows. The course the country will take depends largely on the outcome of the June 7 elections.