Heeding calls by Kurdish politicians and civil society, the PKK announced a unilateral cease-fire ahead of the Nov. 1 elections, but Ankara continues to target the militants. 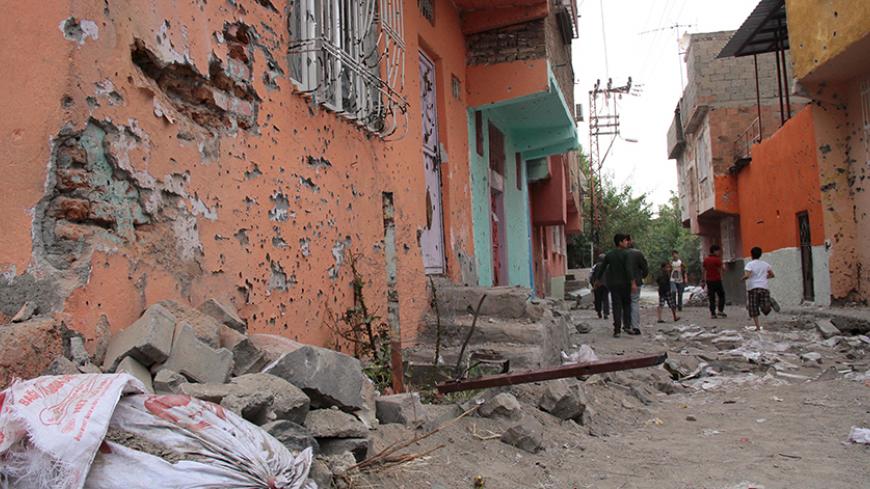 Children play between damaged buildings after a security operation in Sur district in the Kurdish-dominated southeastern city of Diyarbakir, Turkey, Oct. 13, 2015. - REUTERS/Sertac Kayar

DIYARBAKIR, Turkey — On Oct. 10, shortly after two suicide bombers wreaked a bloodbath at a peace rally in Ankara, the Kurdistan Workers Party (PKK) announced a unilateral cease-fire — its 10th since 1993. The government has snubbed the move as a ploy, and operations against the PKK are continuing with critical elections less than three weeks away. Analysts underline it is the first time the PKK has heeded cease-fire calls from the Kurdish political movement, warning that snubbing the gesture could perpetuate and legitimize violence.

The cease-fire statement, issued by the Kurdistan Communities Union (KCK), a PKK-led umbrella organization, said “a decision was made to shift to a state of non-hostility, taking into account appeals from inside and outside Turkey.”

The statement read, “Our movement has decided to shift the guerrilla forces to a state of non-hostility as long as our [Kurdish] people and guerrilla forces are not attacked." It continued, “During this process, our forces will avoid planned actions, refrain from any movement other than keeping their current positions, and make no attempts that could prevent or impede the holding of fair elections.”

The PKK move came after a bloody spiral of violence since late July, when settlement talks between Ankara and the rebels collapsed. The PKK’s previous “non-hostility” decision had come in 2012, evolving into an indefinite cease-fire the following year. Meanwhile, Ankara launched talks with jailed PKK leader Abdullah Ocalan, raising hope for a negotiated settlement of the three-decade conflict. Kurdish hopes grew further in the June 7 polls, as the Kurdish-dominated Peoples’ Democratic Party (HDP) passed the 10% threshold to enter parliament, clinching 80 seats, mainly at the expense of the ruling Justice and Development Party (AKP). The optimism, however, was short-lived as violence erupted anew in what many see as a government maneuver to discredit the HDP and restore its parliamentary majority.

However, the unrest this time was different from what Turkey had been accustomed to. The clashes, confined to rural and mountainous areas in the past, spilled over to cities. Dozens of civilians were killed along with PKK militants and members of the security forces as urban neighborhoods in the mainly Kurdish southeast turned to war zones. The bloodshed, especially the deaths of children, sparked nationwide indignation. Political parties, civil society groups and intellectuals raised vocal appeals to the PKK to announce a cease-fire.

For the first time, the Kurdish political movement, too, made unequivocal calls on the PKK to stop the violence. On Aug. 22, HDP co-chair Selahattin Demirtas said, “The PKK should end its armed action without any ‘buts.’ There is no excuse for using arms in a democratic struggle. Killing soldiers and policemen cannot be a way to call the AKP to account for its mistakes and crimes.”

But the carnage at the peace march in Ankara overshadowed the PKK announcement. The twin bombings, which claimed some 100 lives, targeted especially the HDP group at the rally and sparked fears that the PKK might step back from the cease-fire.

Still, the head of the PKK’s armed wing, Murat Karayilan, asserted the decision remained in place. In a radio broadcast to PKK militants on Oct. 12, he said the halt of hostilities should be observed “without falling into doubt” to honor “the legacy” of the slain peace marchers in Ankara. He urged PKK militants controlling roads in the southeast to withdraw to their bases in the mountains.

The government, meanwhile, snubbed the PKK cease-fire even before it was formally announced. Speaking on Oct. 8 as expectation was building for an imminent PKK statement, Deputy Prime Minister Yalcin Akdogan said, “We’ve seen many times before that the terrorist organization [the PKK] makes such political tactical moves when it is cornered, or when it positions itself for the winter or to serve the interests of its political extension. We are fed up with that.”

On Oct. 11, a day after the cease-fire was declared, the army conducted an air raid in an area near the town of Lice where a PKK cemetery was located, killing eight PKK militants. According to witnesses, it was one of the heaviest bombardments in recent months. Simultaneously, a security operation was launched in the restive Sur district in nearby Diyarbakir, the largest city of the southeast, resulting in casualties. The operation was still underway as of Oct. 13.

Ankara’s snub of the cease-fire has raised concerns not only about the pre-election climate, but also the longer-term prospects of a peaceful settlement.

Sedat Yurtdas, a prominent Kurdish politician and former parliament member, warned the PKK could soon end the cease-fire if Ankara fails to respond in kind, urging civil society and intellectuals to keep up the pressure for a peaceful settlement of the conflict.

“If clashes, bloodshed and operations persist, the unilateral non-hostility decision may stay in place for some time, maybe in conjunction with the elections, but then the conditions will change again. The continuation of operations [against the PKK] will allow only for a temporary process, leaving no room for it to become permanent,” Yurtdas told Al-Monitor.

“The people and the parties should display an unequivocal stance in favor of a permanent settlement. … The government sees this as a recuperation period [for the PKK]. This attitude should change. The public and intellectuals should support every step that facilitates peaceful settlement,” he said.

Mehmet Kaya, head of the Tigris Social Studies Center in Diyarbakir, stressed the PKK had for the first time heeded cease-fire appeals by Kurdish politicians, a move that highlights the growing clout of democratic politics.

“Armed action in the 1990s had gained legitimacy in the [Kurdish] base because all democratic channels were blocked. Now, the situation is different. It was the political movement that made the cease-fire call and compelled [the PKK] to heed it. This is very important,” he told Al-Monitor.

Kaya argued that Ankara’s current attitude went beyond its argument of ensuring public security and appeared aimed at deliberately sustaining the state of conflict.

“If the government keeps up the operations, the PKK’s use of violence as a method [of struggle] will inevitably gain legitimacy in [Kurdish] society. The PKK cannot stay on the defensive forever. The conflict will inevitably deepen and the peace process will become more difficult,” said Kaya. “The government cannot sustain this [for too long], because its argument of equating the HDP with the PKK and portraying it as part of the spiral of violence will further lose credibility.”

Kaya said he believed Ankara would be compelled to backpedal at a certain point and that the cease-fire would hold after the elections.

The PKK has announced nine other cease-fires, all of them unilateral, since it took up arms in 1984. The first was declared in March 1993 as a result of efforts by Iraqi Kurdish leader Jalal Talabani, whose mediation was requested by then-Turkish President Turgut Ozal. The fledgling peace effort, however, quickly foundered as Ozal suddenly died and the PKK killed 33 unarmed conscripts, two incidents that remain the subject of controversy to date.