6 reasons why Turkey's war against the PKK won't last

There are six major reasons why Turkey's war with the PKK, which resumed July 24 after 2½ years of non-hostility, cannot be sustained. 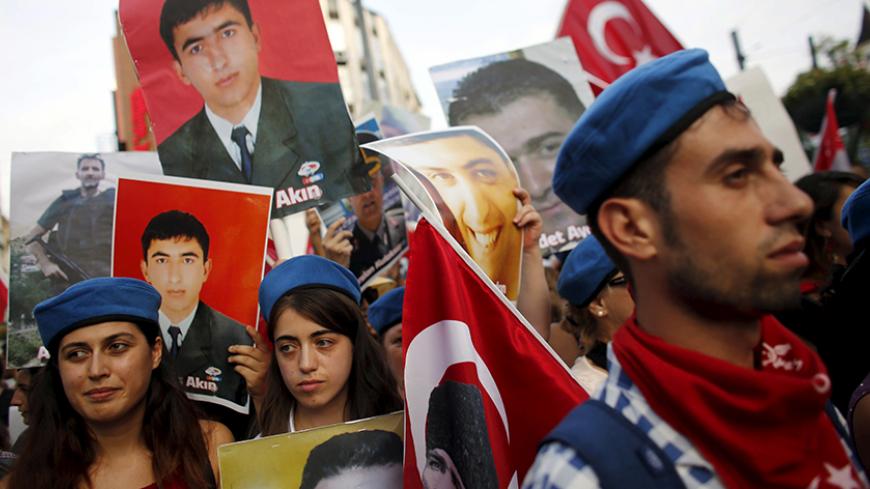 After 2½ years of non-hostility, Sept. 6 went on record as the bloodiest day suffered by Turkish government forces since the war against the Kurdistan Workers Party (PKK) erupted again July 24.

The PKK attack occurred in the rural area of Daglica in Yuksekova district in Hakkari province, where Turkey’s borders with Iraq and Iran intersect. Roadside bombs exploded as two military armored vehicles passed, killing 16 soldiers and wounding others.

The toll on the Turkish military is the highest from a single attack since the end of the 1990s, which witnessed the most violent clashes with the PKK. Heavy casualty-causing PKK attacks since 1984, at the beginning of the armed insurgency, have dramatically affected the public, and the course of the conflict. It is now highly likely that the Sept. 6 Daglica attack will be a turning point, an omen that the separatist trend in the PKK is becoming dominant.

On the same day, a rocket hit a police car in Diyarbakir, the biggest city in the heavily Kurdish-populated southeast. Two policemen were killed and three others were wounded. A curfew was declared for part of the city. With these fatalities, the number of police killed by the PKK since July 24 is now 33, another sign of the escalating warlike atmosphere in the east and southeast of the country.

People are wondering how security will be assured in the southeast for the Nov. 1 elections.

Many veteran observers fear the current situation suggests a return to the bloody conflict years of the 1990s, when PKK and government fighting cost the lives of 40,000 people. Is this really the case?

Is Turkey slated to relive the days etched in its collective memory as the “1990 years,” when the PKK attacked outposts, killing soldiers and Kurdish civilians, death squads executed Kurdish activists and thousands of villages were forced to evacuate to deny bases for the PKK?

When comparing today with the 1990s, it is important to keep in mind what the state gained from those clashes. One outcome was the significant reduction in the PKK’s armed strength. The Turkish Republic, with its counter-guerrilla tactics, significantly weakened the PKK in the rural areas where it was operating and in 1999, the PKK's founding leader, Abdullah Ocalan, was captured. The PKK then declared a unilateral cease-fire and reduced its armed forces in the mountains.

The question that crops up now is whether it is possible for government forces to win the new war of 2015 as it did in the 1990s.

Actually, it is not necessary to ponder this question deeply. It is not possible to sustain such a war, so a debate on who is going to win it becomes irrelevant. There are many reasons for such an assertion.

First, in the 1980s and '90s, the epicenter of the Kurdish movement was mostly in rural areas. The PKK was a movement that first sought to encourage an uprising by villagers. With the 2000s, along with politicization of the Kurdish issue and the Kurdish movement becoming a mass phenomenon, the center of gravity shifted from rural areas to cities. The attack at Daglica was in a rural area, but the center of the conflict that began in July is not the mountains, but in cities and towns of the predominantly Kurdish southeast. These are urban areas where the Kurdish parties received the highest number of votes and where their core activism is widespread. It has become impossible to distinguish between the Kurdish movement in cities and the majority of Kurds living there. This is why it has become appropriate to say “Kurdish war” for the latest spate of clashes.

It won’t be realistic to think that the scorched-earth policy of the 1990s, which was designed to forcibly evacuate rural areas to deny PKK those resources, can now be repeated in urban areas.

Nevertheless, persisting with security operations in southeastern urban centers could bring us face to face with scenes of destruction reminiscent of the 1990s rural sector.

It will not be easy to deal with the instability from social, urban and economic damages that will be caused throughout the country by clashes between thousands of armed urban militants and the state. Nor will it be easy to explain this picture to the rest of the world.

Of course, Ankara can launch effective, widespread ground operations against PKK bases in Iraq’s Kurdish region. But this will not change the reality that the root problem is the highly popular Kurdish movement in cities.

Second, the Turkish public is not convinced that the war initiated by Erdogan is essential to Turkey’s security. The visible sign of this is the protests of the families of police and soldiers killed and the crowds attending their funerals who hold the government primarily responsible. Those ruling Turkey had never witnessed such collective and persistent reactions at funerals.

Third, as I emphasized in my article “Erdogan’s war,” published Aug. 26 in Al-Monitor, for the first time in 13 years of Justice and Development Party rule, the status of non-hostility has been discarded and resumption of war has been the political choice of the government for coming elections.

In the 1990s, the determined struggle of the state to militarily defeat the PKK was of a strategic nature. For today’s government to terminate the non-hostility is a tactical step for political ends. It is not a firm decision. It can be reviewed at any time.

Fourth, Ocalan was the PKK’s sole leader. His capture and delivery to Turkey shook the organization to its roots. The current PKK leadership based in Iraq’s Qandil Mountain is a collective entity, making it impossible to obtain significant results by targeting a single person.

Fifth, thanks to the PKK's Syrian extension, the US-supported Democratic Union Party (PYD), the PKK has become the most reliable military partner of the Western alliance in ground operations against the Islamic State. Also, the PKK has emerged as the sole defender of secularism among governments and non-state actors in a region submerged in religion extremism. In Western public opinion, all these merits contribute to the legitimacy of the Kurdish movement in Turkey and make it difficult for Western governments to sympathize with suppression of the PKK. This is another factor that limits sustainability of the war.

Sixth, the conflict has dramatically worsened economic security and predictability, further threatening Turkey’s fragile economy. The tourism sector unsurprisingly has suffered. It is commonly accepted that the war plays a role in daily devaluation of the Turkish lira against the US dollar.

Now, a brief tour d’horizon of what might happen should the Erdogan government persist in continuing this irrational war.

The first factor to bear in mind is the attitude of the PKK leadership in the Qandil Mountains. Qandil has accepted this war and is willingly pursuing it with violent means, which causes strong reactions in the west of the country. Those in Qandil have never totally abandoned their goal of separatism, which is now back in vogue.

Qandil can escalate the war, as we saw in the Sept. 6 Daglica attack, or the war can get out of control because of its own dynamics. If that happens, Turkey may have to face the spread of violence to big cities, ethnic clashes between Turks and Kurds, the internationalization of Turkey’s Kurdish question and the return of the military tutelage that we were told was gone forever.

To protect Turkey from the potential fallout of such risks, it is urgent to seek a cease-fire and to ensure the Nov. 1 elections are held in a secure environment.