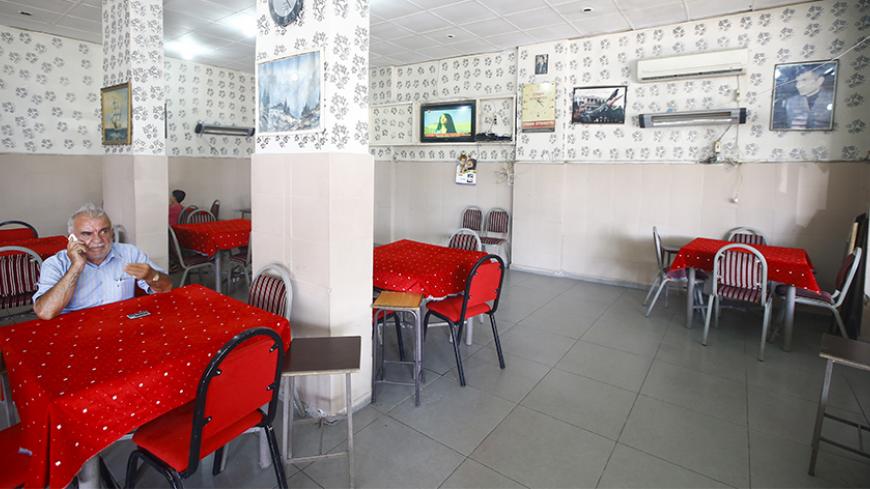 A Turkish Kurdish man talks on his cellphone at a nearly empty tea shop in the Kurdish-dominated southeastern city of Diyarbakir, Turkey, Aug. 31, 2015. - REUTERS/Osman Orsal

The rekindled conflict between the Turkish military and the Kurdistan Workers Party (PKK) is increasingly spilling over into urban areas and claiming civilian lives. Governors in a number of cities and districts in the predominantly Kurdish southeast have imposed curfews, and military and government authorities have declared a series of special security zones in residential and rural areas, restricting the population’s freedom of movement.

With draconian security measures and restrictions on daily life on the one hand, and the unrest stirred by the PKK and its urban youth wing on the other, economic life in the impoverished region has taken a significant hit. The Kurdish peace process, assisted by a state of nonhostility between the PKK and Ankara, had revitalized the economy of the southeast, encouraging new investment projects, business initiatives and tourism. Since July 20, the situation has suffered visible setbacks, with investors suspending projects or fleeing the region.

In Diyarbakir, the largest city in the southeast, 20 out of some 170 factories in the local industrial zone have reportedly closed. Travel agencies have largely canceled tours to historic and tourist areas in the southeast, with the hotel occupancy rate plunging from more than 80% to 30%. Many small shopkeepers and tradesmen are shuttering their businesses, worried about their own safety and the security of their shops.

The conflicts in neighboring Iraq and Syria, exacerbated by Islamic State terror, have already dealt a serious blow to Turkish exports to the Middle East, leaving Iran as virtually the only available export route. Now this route is also jeopardized, with three border crossings in Agri, Van and Hakkari provinces closed because of PKK abductions of customs officers. Each of these border crossings had an annual trade volume of up to $150 million in addition to some 50,000 Iranian tourists crossing into Turkey. All this activity has come to a standstill.

PKK militants in the area have intercepted trucks and buses, abducted passengers, set fire to vehicles and attacked trains, leading Iran to suspend bus and train services from Tehran to the Turkish border regions of Van and Erzurum. Last month, the Iranian government presented a diplomatic protest to Ankara after Iranian trucks were torched and an Iranian citizen was killed in an attack on a passenger bus.

Turkey’s International Transporters Association (UND) reports that the PKK attacks on commercial trucks passing through the southeast have scared off drivers. Many shipping companies are now struggling to find truckers. Noting that the number of Turkish trucks passing into Iran and Iraq had fallen to 362,300 in the first eight months of 2015, a 20% decrease from the same period last year, UND Chairman Fatih Sener warned that things could deteriorate even further if the unrest in Turkey continues.

The gloomy economic outlook for the region has prompted banks to curtail loans to entrepreneurs who remain willing to invest in the southeast. According to local businesspeople, the once enthusiastic banks are now imposing tough conditions on lending, demanding guarantees not required in other regions or simply rejecting loan applications.

The peace process had also triggered a construction boom in the region, especially in Diyarbakir, giving rise to new redevelopment projects, luxury residential complexes and shopping malls. The PKK’s attacks have strangled this momentum as well, with many projects now on hold and real estate prices falling. The construction of 20 hydroelectric power plants, an investment worth billions of dollars, has similarly ground to a halt as a result of PKK militants raiding construction sites, abducting workers and torching construction machinery. The planned plants, with a total capacity of 1,444 megawatts, are of vital importance for meeting the needs of households as well as industrial facilities in the southeast.

Business communities and industry in the region are alarmed, warning that the conflict is undermining every sector of the economy amid a mounting death toll, including many civilians, adding to the gloomy environment. Mahmut Odabasi, head of the Southeastern Industrialists and Businesspeople Association, stressed, “Maintaining the state of nonhostility and the peace process would mean both a humanitarian and commercial gain for all of us. Businesspeople should support the solution process.”

Hakan Akbal, chairman of the Association of Young Southeastern Businesspeople, believes the Kurdish conflict should be resolved on the basis of self-governing federated states. He argues that the Ottoman Empire successfully implemented a similar model for five centuries, with Diyarbakir serving as the center of the empire’s fifth largest “eyalet,” or state, in the 16th century.

Along with the bitter humanitarian and social repercussions, the termination of the peace process has produced an immediate bill of $55 billion for Turkey, as reported in Al-Monitor last month. Meanwhile, the PKK’s deadly attacks on Turkish soldiers and police, including a Sept. 6 ambush in Daglica that killed 16 soldiers, are fueling public anger. On the other side, Kurdish youngsters, children and women are perishing in clashes in urban areas, swelling the humanitarian bill, which cannot be calculated in liras or dollars.

In late August, a group of lawmakers from the main opposition Republican People’s Party traveled to the city of Cizre, which has seen some of the worst violence and bloodshed and has been shut off from the outside world and under curfew since Sept. 4. In their field report, the lawmakers stressed that economic life in the city had ground to a halt and that some residents had already migrated to western Turkey. “The law does not apply in the region,” the report asserted.

Turkey’s eastern and southeastern provinces are already the country's poorest regions, lagging behind all other areas in social and economic indicators. They are now plunging into a fresh economic and social collapse under the merciless blows of fighting and terrorism.