Turkey’s mainly Kurdish southeast is sliding deeper into chaos as residents flee neighborhoods devastated from clashes between the security forces and Kurdish militants. 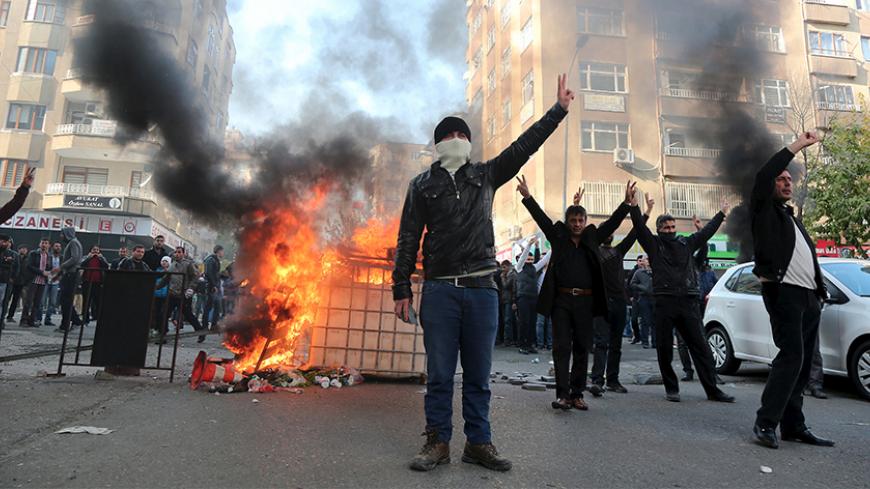 Demonstrators gesture during a protest against the curfew in Sur district, in the southeastern city of Diyarbakir, Turkey, Dec. 14, 2015. - REUTERS/Sertac Kayar

DIYARBAKIR, Turkey — On the morning of Dec. 12, the ancient heart of Diyarbakir, the largest city of Turkey’s Kurdish-majority southeast, was abuzz with anxious activity. Throngs of people hurried into the district of Sur, while others hurried out. It was the first time residents could go out freely after a nine-day curfew, imposed amid clashes between the security forces and groups linked to the Kurdistan Workers Party (PKK), was briefly lifted.

In one narrow street, the Cengiz family was busy loading a few belongings onto a pickup truck, getting ready to leave Sur as at least 20,000 others have done in recent days, according to local rights activists. “What else can we do? There is a war here,” Mehmet Cengiz told Al-Monitor. “How long is this war going to last? We could not go out for nine days because of the clashes. We couldn’t even get bread. The people are suffering. A solution must be found.”

As the Cengiz family headed to the home of relatives in another district, Muharrem Dolek, a restaurant worker in his 50s, stared around anxiously. He, too, has moved his family to the homes of relatives. “We could stand the clashes for two nights only. Then I went to the police and asked them to let us go because we were ruined psychologically. They told us we could go, but we can’t come back. We took the children and scattered like immigrants — two of us taking refuge in one house, three in another. Last night, they said the curfew was lifted, so I came to check on our house,” he told Al-Monitor.

Dolek, who put the blame on both the state and the PKK, admitted to suicidal thoughts out of despair. “I would have left this place if I had the means. Both sides are harming us. One side is digging trenches, then the other comes and fires guns. We are fed up. Sometimes I think I’d rather shoot myself in the head,” he said.

Kadir Celik, another resident moving out of the neighborhood, disagreed. “The people were left starving. This is what the state did to us,” he told Al-Monitor. “We rented a house elsewhere. People are moving to rented homes, but many can’t afford the rent. We don’t know what will happen now.”

Sur, which means “fortress walls” in Turkish, takes its name from the centuries-old walls encircling the old city of Diyarbakir, inscribed on the UNESCO’s World Heritage List earlier this year. The district’s population numbers some 125,000 people, half of them residents of the ancient walled city, which is dotted by numerous monuments attesting to Diyarbakir’s millennia-old history.

The district has been in chaos for weeks. Urban unrest across the mainly Kurdish southeast has simmered since August, when PKK-linked groups moved to take control of certain residential areas and declared what they call “self-rule.” The authorities responded with security crackdowns. To stop the security forces from entering the neighborhoods, the Patriotic Revolutionary Youth Movement (YDG-H), the PKK’s urban youth branch, dug trenches and erected barricades. The curfews followed, and young people armed with light weapons clashed with the police.

In Sur, six neighborhoods were placed under curfew for police operations to remove the barricades and fill the trenches. In effect, however, the whole district has been under blockade, with security checks for anyone entering or exiting the district. The nine-day curfew was lifted for only 17 hours, which many residents used to flee their homes.

The brief lifting of the curfew revealed scenes out of a war zone. Though the number of fleeing people was smaller, many compared the exodus with last year’s Kurdish flight from the Syrian city of Kobani to Turkey, sparked by the Islamic State’s offensive. Some residents claimed police had urged them to evacuate their homes as soon as possible.

This reporter had to pass three police checkpoints to reach the inner part of the district, where bullet-riddled buildings, craters opened by explosions and toppled electric poles stood as grim testaments to the clashes. The oft-photographed house that has become the symbol of the unrest was immediately recognizable. Its walls were partially demolished and not a single square meter of its façade seemed to have escaped the bullets. In the adjacent house, an elderly woman was packing up. Pointing to the big hole in the building’s wall, she wept, “Why has this befallen us? What did we do?”

Not far away, the five-century-old Kursunlu Mosque was in heartbreaking shape, charred and bullet riddled. The burning of the edifice last week remains a subject of outrage amid a widespread public outcry and recriminations between the police and the YDG-H. Young militants wearing balaclavas and armed with Kalashnikov rifles still manned barricades around the mosque. The sights in the inner streets left one wondering whether this was really Diyarbakir. The barricades became bigger, and curtains hung both vertically and horizontally, intended to block the view of snipers and helicopters.

On the opposite end of the neighborhood, an armed group manned a big trench the YDG-H calls its “headquarters.” More residents were packing up. An armed young man was arguing with a woman who insisted on taking her belongings. “You can’t take your belongings. I’ll be reported if I give you permission,” he said, in an apparent sign that the militants are tasks with keeping civilians in the neighborhood.

Though the proclamations of “self-rule” have generated some support among more hard-line Kurds, others have started speaking up against the move. In a newspaper interview last week, Sah Ismail Bedirhanoglu, the head of the Federation of Eastern and Southeastern Businesspeople Associations, said the “trench politics” had brought “great destruction” to the Kurds. Slamming some media reports that he said encouraged the militants, Bedirhanoglu grumbled, “To those who write that a new life is being built, I say, ‘Come and live in Sur!’ When you wake up in the morning, you’ll have a trench outside your door, with a bomb on one side and a mine on the other. Those who are so full of praise are invited to live here.”

The unrest is taking a serious economic toll in a city where many residents are already impoverished, displaced from surrounding villages during the height of the Kurdish conflict in the 1990s. The head of the Diyarbakir Shopkeepers and Craftsmen Chamber, Alican Ebedinoglu, told Al-Monitor that about 1,000 businesses had closed as a result of the unrest.

“Sur is the city’s tourism, commerce and employment hub. More than 10,000 shopkeepers and craftsmen are based in Sur, in addition to another 10,000 people they employ. Due to the recent unrest, more than 1,000 shopkeepers and craftsmen have closed their businesses across the city. The number of laid-off workers is estimated between 3,000 and 5,000,” Ebedinoglu said. “No one knows how long the curfews will continue. No one knows how many more businesses will close and how many more people will be laid off.”

The “self-rule” upheaval has so far produced trenches, barricades, tunnels under residential buildings, bullet-riddled houses and thousands of people fleeing their homes. If it goes on like this, the “self-rulers” will have no one to rule in their neighborhoods.