The town of Silopi in southeastern Turkey has been devastated by monthlong clashes between the security forces and Kurdish militants, with local residents blaming both the government and the rebels for the destruction. 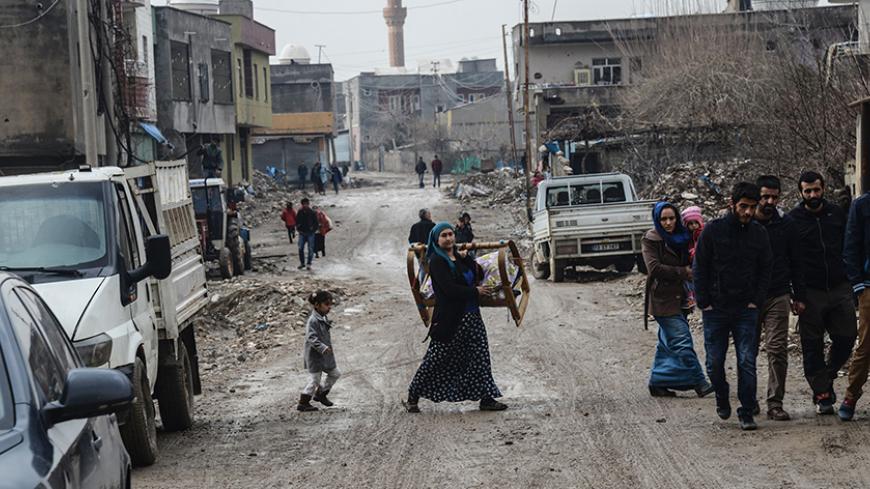 A woman carries a cradle retrieved from the wreckage of a building as residents walk along roads damaged in the fighting between government troops and separatist Kurdistan Workers Party fighters in the Kurdish town of Silopi, in southeastern Turkey, Jan. 19, 2016. - ILYAS AKENGIN/AFP/Getty Images

SILOPI, Turkey — The two-story building in the foothills of the Cudi Mountains, not far from the Turkish-Iraqi border, can hardly be called a house anymore. It lies in ruins, hit by shelling from a tank or a howitzer.

“What wrong did I do to deserve this?” an elderly woman laments at the debris. One cannot help but wonder whether this is a scene from Syria. But no, this is Silopi, a town in Turkey’s predominantly Kurdish southeast.

Home to some 121,000 people, Silopi saw some of the worst clashes that have raged in the southeast when security forces waged a ferocious campaign against militants of the Patriotic Revolutionary Youth Movement (YDG-H), the armed youth wing of the Kurdistan Workers Party (PKK), who had sought to gain control in a number of urban areas, digging trenches and erecting barricades to keep the authorities away.

Silopi was placed under a round-the-clock curfew on Dec. 14, effectively cutting it off from the outside world. The security operation there lasted more than a month, before the curfew was partially lifted and journalists were allowed to enter the town on Jan. 19.

Traffic on the road to Silopi was heavily snarled as thousands of trucks scrambled to make their way to the nearby Habur border crossing, which had also remained closed for weeks, leaving thousands of vehicles stranded.

One had to cross three military checkpoints to enter the city. Media vehicles were not spared from the tight controls and searches. “You never know what the organization can do,” said the soldier searching the car in which this reporter traveled. “They might have put something in your car on the sly.”

A flurry of military activity was the first thing that greeted the eye in town, with dozens of armored vehicles roaming the streets. The Habur crossing road, which cuts through the city, had become a demarcation line. The neighborhoods on its right side were easily recognizable as the theater of the clashes. One could barely walk through the area, let alone drive. The streets were dotted with craters — the result of explosions employed as a combat tactic by both sides. The security forces blew up barricades to advance, while the militants detonated trenches full of explosives to keep them away. The buildings along the streets were riddled with bullets, now the hallmark of neighborhoods where the clashes take place.

The Buluttekin family’s house was heavily damaged before it could even be finished. The balcony had collapsed, the windows shattered and a hole gaped in the wall of the ground floor. The owner, Feyruze Buluttekin, led Al-Monitor in through the broken door, pointing to the bullet-riddled furniture. The family’s plight, however, was not limited to the devastation of its home. For several days, they had to live with the body of a relative killed in the street, unable to bury her.

"We stayed home, though some people left the neighborhood. On the 13th day [of the curfew], my cousin — a mother of seven — was killed at the entrance of her house. We kept the body at home for five days … and then we took it to the mosque,” Buluttekin told Al-Monitor. “On the 15th day, the soldiers surrounded the neighborhood and took us away to a sports hall. You see what has become of our house. What we went through was not less than what Kobani, Palestine or Sinjar have seen.”

Further down the mud-drenched street, groups of residents chatted. Seeing the journalists, an elderly man, Tajdin Aytis, invited them to his home. The facade of the building seemed intact. With bakeries yet to open, the man’s daughter made bread on a bonfire in the courtyard. Aytis wanted to show the journalists his living room, where a blanket covered one of the walls — or rather what was once a wall. Masked men tore down the wall with an earth-mover, Aytis told Al-Monitor, in what seemed to be a description of militants. “When the clashes began, soldiers and policemen raided our home and searched it. They told us to evacuate, and we went to the village,” he said. “I don’t know the men who tore down the wall. They broke all our furniture as well.”

In the Basak neighborhood, where the heaviest fighting took place, the local square seemed the only structure intact. A few meters away, people gathered at the wreck of a two-story house, which seemed to have been hit in an aerial strike. “Fortunately, no one was killed,” someone said. An elderly woman wept at the ruins. Introducing herself as Sariye Mutlu, she asked Al-Monitor, “What wrong did I do to deserve this? We lived in this house, a family of 15. My husband is sick and I have a handicapped daughter. What are we going to do now? Where are we supposed to go?”

Many residents of the neighborhood were outraged at the state for using disproportionate force. Some, however, were angry with the PKK as well. Unlike others, one man did not hesitate to give his name as he slammed the militants. He said, “They were breaking the doors [of emptied homes], and I scolded them. ‘Those people are going to come back home,’ I said. They put a gun on my chest and threatened to kill me. 'Go ahead,’ I said. Then, they went away. When the soldiers entered the neighborhood and we walked toward them [for protection], [the militants] opened fire behind us.”

After Al-Monitor bid farewell to the man, whose name will be withheld because of what came next: Another man came by and said in a low voice, “Don’t trust him. The YDG-H abducted his son because he was an informer. They were going to kill him, but then some people intervened to stop them.”

Residents were also incensed over the graffiti scribbled on the walls, apparently by members of the security forces. It included racist and obscene insults to jailed PKK leader Abdullah Ocalan and Selahattin Demirtas, Turkey’s top Kurdish political figure. Some warned journalists not to follow police vehicles because “mines could have been planted on their way.”

In the afternoon, the bustle in town increased as both the residents and the security forces prepared for the approaching curfew, now starting at 6 p.m. Dozens of armored vehicles sped into the city; others left. One resident said, “I’ve never seen that many military vehicles in my life. As if the state dropped anything else and only made military vehicles.”

Getting out of Silopi was as arduous as getting in. Crossing through the last checkpoint alone took 45 minutes as the security forces conducted lengthy searches while passengers waited pressed face-first against their cars. Even an ambulance carrying a sick person was searched on the grounds that the militants could use ambulances to exit the city in disguise. The nurse kept an eye on the patient while rummaging through her bag to produce an ID card.