Biden calls for 'change of attitude' by Turkish government

US Vice President Joe Biden says Turkey is setting the wrong example for the region. 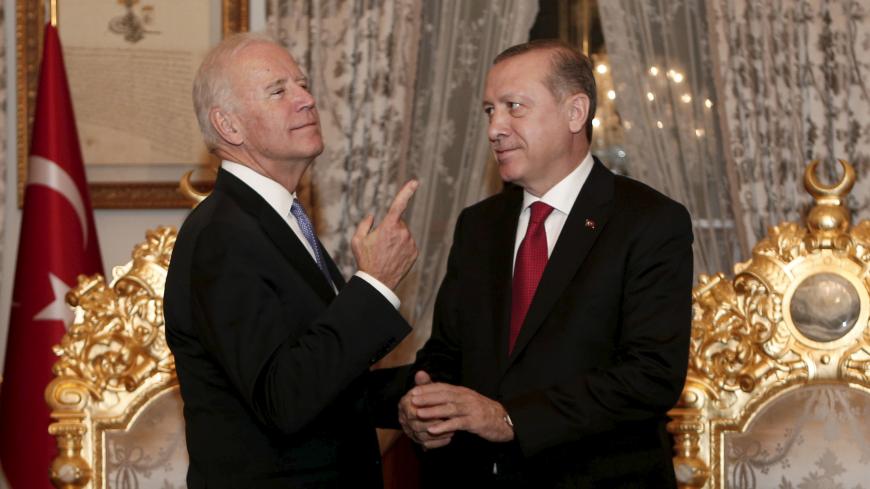 US Vice President Joe Biden called for a “change of attitude” by Turkish President Recep Tayyip Erdogan toward critics of Turkey’s increasingly destructive military campaign against Kurdish rebels and cities in southeast Turkey.

Speaking in Istanbul on Jan. 22, Biden said, “If you don’t have an ability to express your opinion, to criticize a policy, to offer competing ideas without fear of intimidation or retribution, the country is robbed of opportunity and the country is being robbed of possibilities.” He added, “When Internet freedom is curtailed and social media sites like YouTube or Twitter are shut down and more than 1,000 academics are accused of treason simply by signing a petition, that’s not the kind of example that needs to be set in the region.” Biden said that Turkey’s commitment to free expression and democracy matter “not only to Turks but to America.”

Cengiz Candar writes of a “witch hunt” conducted by the Turkish government against academics and intellectuals who signed a petition protesting the Turkish military campaign against Kurdish towns in southeast Turkey. Erdogan slammed the signatories as “so-called intellectuals” committing “treachery” by engaging in propaganda on behalf of the Kurdistan Workers Party (PKK), which Turkey considers a terrorist group.

Biden told Turkish lawmakers that the United States backed Turkey’s campaign against the PKK, but that its heavy use of force in southeastern villages is unsustainable.

Mahmut Bozarslan reports this week on the effect of the Turkish military campaign in Silopi, a predominantly Kurdish town of 121,000 on the Iraqi border. Silopi has been the scene of some of the worst fighting between the Turkish military and the Patriotic Revolutionary Youth Movement (YDG-H), the PKK’s radical armed youth wing, which many residents also blame for the carnage.

“A flurry of military activity was the first thing that greeted the eye in town, with dozens of armored vehicles roaming the streets. The Habur crossing road, which cuts through the city, had become a demarcation line. The neighborhoods on its right side were easily recognizable as the theater of the clashes. One could barely walk through the area, let alone drive. The streets were dotted with craters — the result of explosions employed as a combat tactic by both sides. The security forces blew up barricades to advance, while the militants detonated trenches full of explosives to keep them away. The buildings along the streets were riddled with bullets, now the hallmark of neighborhoods where the clashes take place,” Bozarslan writes.

Biden met Jan. 23 with Erdogan and Prime Minister Ahmet Davutoglu. On the agenda was what more Turkey can be doing to battle the Islamic State (IS). Biden has been a kind of truth teller on these matters, providing candor not always possible by US diplomats who have engaged in agonizing diplomacy for what would seem to be the most basic coordination, such as allowing the United States to use Incirlik Air Base to bomb IS. Biden bucked diplomatic niceties on Oct. 3, 2014, when he let slip that the “biggest problem is our allies" in cracking down on foreign fighters in Syria, and that Turkey, Saudi Arabia and the United Arab Emirates “were so determined to take down [Syrian President Bashar al-] Assad and essentially have a proxy Sunni-[Shiite] war. … They poured hundreds of millions of dollars and thousands of tons of weapons into anyone who would fight against Assad — except that the people who were being supplied were [Jabhat] al-Nusra and al-Qaeda and the extremist elements of jihadis coming from other parts of the world."

Fehim Tastekin explains the reasons for the many, well-justified questions in Turkey and elsewhere about their commitment to fighting IS. While there is no question that Turkey has been a target and victim of IS terrorism, Ankara can hardly be considered a leader in taking the fight to the jihadi group. What Turkey has done to combat IS has often followed months if not years of US pressure, or has occurred in the aftermath of IS-linked terrorist attacks, such as the deadly suicide bombing on Jan. 12 in Istanbul. Turkey has dealt with IS and the al-Qaeda-linked Jabhat al-Nusra with a kind of strategic relativism in the broader context of its more pressing priorities in Syria, which are degrading the Democratic Union Party (PYD) and its armed wing, the People’s Protection Units (YPG), and toppling Assad.

“For years, Turkey has been criticized for its porous borders that allow fighters and weapons to pass unhindered. When it is pointed out that jihadis control border terrain and Turkey is becoming another Pakistan, Turkish officials merely respond that such allegations are exaggerated. When Jabhat al-Nusra and then IS became well-established and prominent, Turkey’s argument was, ‘Assad has sponsored these organizations. Their source is the regime. If the regime goes, then this question will go away too.’ But when the United States added Jabhat al-Nusra to its terrorist list in 2012, Turkey covertly continued to support that group,” Tastekin writes.

Tastekin adds that “despite constant warnings from the United States, Turkey did not try to block the transfer of IS oil through its border until March 2014. Although some measures were taken to cut the pipelines across the Assi River at Hatay, oil trade continued via traditional smuggling routes,” Tastekin's article asks why the Turkish security services were able to move so quickly to round up IS cells after Jan. 12. “This naturally justified the question, if Turkey had the security intelligence to detain so many people in one night, why didn’t it take action before the bombing? Then came reports that the national intelligence service MIT had warned security agencies on Dec. 17 and Jan. 4 that tourist sites and foreigners could be targeted. The only court action against IS operations in Turkey followed the complaints of families of the young people who had joined the organization. Of 67 suspects listed in the charge sheet submitted to the court, 23 were named by their own families; 29 were released. This and similar cases give the impression that legal action against IS is not taken very seriously. Government officials say such allegations are baseless. According to them, in the first 11 months of 2015, 1,200 people were detained on suspicion of links to IS and at least 350 were arrested.”