Why the world questions Turkey's stance on Islamic State

Reasons are mounting to doubt Turkey's dedication to battling the Islamic State. 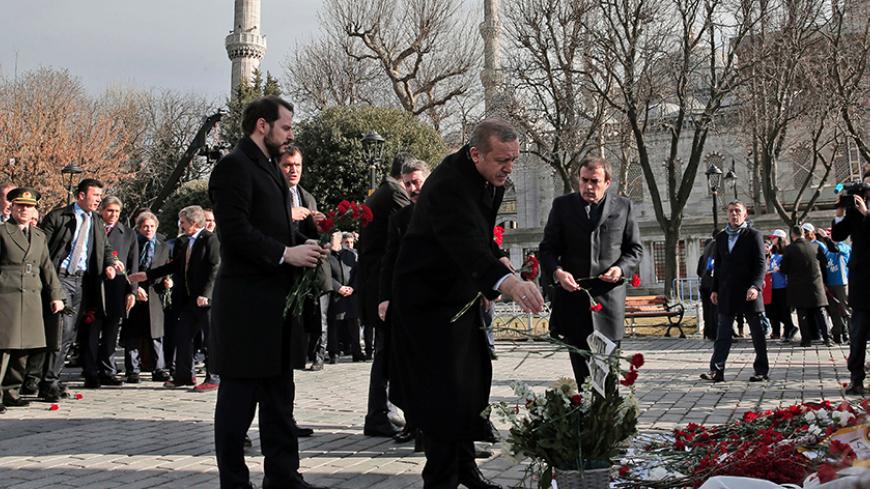 Is Turkey actually fighting the Islamic State? Or is the accusation that Turkey supports IS valid? If you ask President Recep Tayyip Erdogan, no other state combats IS as much as Turkey does.

After the deadly suicide bombing Jan. 12 in Istanbul’s Sultanahmet area, he was asked how sincere Turkey is about fighting IS. An irate Erdogan replied, “Turkey is the primary target of all terror organizations operating in the region, because we are combating all of them without discrimination. Is there any other country in the world apart from Turkey that combats the [IS] terror organization as we do and pays so much doing so?”

Prime Minister Ahmet Davutoglu also said Turkey is determined in its battle against IS.

“In about 48 hours, we attacked [IS] with about 500 tank and artillery rounds,” Davutoglu said a few days after the assault in Istanbul. “We hit [IS] positions and bunkers with all our means at the Syrian border and at Bashiqa. About 200 [IS] militants were killed in the last 48 hours.”

There are several reasons why such statements by Erdogan and Davutoglu don't have much of an impact and often aren't taken seriously. The first is Turkey's support of organizations fighting against the regime of Syrian President Bashar al-Assad. Sometimes those groups include IS jihadis.

For years, Turkey has been criticized for its porous borders that allow fighters and weapons to pass unhindered. When it is pointed out that jihadis control border terrain and Turkey is becoming another Pakistan, Turkish officials merely respond that such allegations are exaggerated. When Jabhat al-Nusra and then IS became well-established and prominent, Turkey’s argument was, “Assad has sponsored these organizations. Their source is the regime. If the regime goes, then this question will go away too.” But when the United States added Jabhat al-Nusra to its terrorist list in 2012, Turkey covertly continued to support that group.

By 2014, Ankara’s policy was simple: If IS was fighting against opposition groups supported by Turkey, it was a “nasty” organization, but IS became a good group when it fought against the Kurds, designated by Ankara as the enemy. Turkey used IS as a tool to suppress the Kurds who had declared autonomy in Rojava, the western Kurdistan region of northern Syria.

Another question arose when Turkey basically handed over its Mosul Consulate to IS in June 2014, believing IS wouldn't touch the Turks. The consulate staff was taken hostage and had to be rescued through bargaining.

Turkey also allegedly has financed IS. Despite constant warnings from the United States, Turkey did not try to block the transfer of IS oil through its border until March 2014. Although some measures were taken to cut the pipelines across the Assi River at Hatay, oil trade continued via traditional smuggling routes.

The oil IS was producing in Syria's Hasakah and Deir ez-Zor provinces was smuggled into Turkey by mixing it with the Kurdish oil that was legally exported to Turkey by the Kurdistan Regional Government. This oil flow under the guise of Kurdish oil was not a secret to those monitoring the region, even before the Russians announced it as a major discovery. Al-Monitor's Iraqi and Syrian sources said, “Arab tankers take the [IS]-produced oil across to Iraq to oil terminals at Zakho and Dahuk. There the [IS] oil is mixed with Kurdish oil. Then Turkish tankers carry it into Turkey legally as Kurdish oil.”

Another point that raised questions about Turkey’s truthfulness in combating IS was how Ankara took a position against IS only under US pressure. While Ankara continued bargaining with the United States on the concept of combating terror, Ankara declared Incirlik Air Base available for US and coalition air operations in Syria — but then suddenly switched its focus from IS to the Kurdistan Workers Party (PKK). Despite two artillery salvos against IS after Turkish soldiers came under fire twice in July, Turkey mobilized its military might against the PKK instead. Politically, Ankara launched a propaganda campaign equating the US-supported Kurdish nationalist Democratic Union Party and its military wing with IS.

Turkish security agencies said they had been aware of the suspected bombers before attacks in Suruc, Diyarbakir and Ankara, but were not actively monitoring them. The government, instead of focusing on the IS role, diluted the case by saying those responsible could have been from the PKK, IS, the Syrian regime or the Revolutionary People’s Liberation Party-Front. The government also imposed news blackouts on all attacks as yet another attempt to make people forget.

Turkey's ambiguities in the legal struggle against IS also raise questions. News of IS militants apprehended and then released, or the potential suicide bombers who were known but not apprehended, gave rise to suspicions that Turkey plays a double-sided game. Davutoglu's statement, “There is a list of people who can launch suicide attacks in Turkey. … If you take any action before they actually attack, then you are protested.” Most commentators viewed that as an admission of a security flaw.

Immediately after the Sultanahmet bombing, dozens of people accused of IS membership were rounded up across the country.

This naturally justified the question, if Turkey had the security intelligence to detain so many people in one night, why didn’t it take action before the bombing? Then came reports that the national intelligence service MIT had warned security agencies on Dec. 17 and Jan. 4 that tourist sites and foreigners could be targeted.

The only court action against IS operations in Turkey followed the complaints of families of the young people who had joined the organization. Of 67 suspects listed in the charge sheet submitted to the court, 23 were named by their own families; 29 were released.

This and similar cases give the impression that legal action against IS is not taken very seriously. Government officials say such allegations are baseless. According to them, in the first 11 months of 2015, 1,200 people were detained on suspicion of links to IS and at least 350 were arrested.

Still other situations raise doubt about Turkey’s stance against IS in Iraq.

For example, Turkey, which wants to play a role in the future of Mosul and promote the role of its Sunni allies, is still keeping troops at the Bashiqa camp despite protests from Baghdad.

Also, Turkey has delayed blocking the 98-kilometer (61-mile) border strip that serves as IS' window to the world. Many parties, and certainly the Iraqi government, are asking why, if Turkey is sincere in the struggle against IS, doesn't it cleanse its border of those terrorists? Only now is Turkey fortifying this border strip with concrete walls to end such accusations.

Turkey firmly opposes the Kurdish People's Protection Units operations lest they create a Kurdish corridor at Jarablus, which is still controlled by IS.

While Turkey intensified its military operations against its own Kurds, its military mobility along the border was seriously curtailed with the fear that Russia would retaliate after Turkey downed one of its jets. Turkey is now in a position of not even implementing its own game plan, never mind joining the common front against IS.

We now detect a new option to implement the Turkish plan that entails deploying forces friendly to Turkey to Jarablus, should IS be pushed out. Which are those forces that would be left? IS “cousins” Jabhat al-Nusra and Ahrar al-Sham. Turkey appears to be on the perilous course of resorting to proxies in its battles.

No doubt, these organizations will become headaches for Turkey, just as IS did.