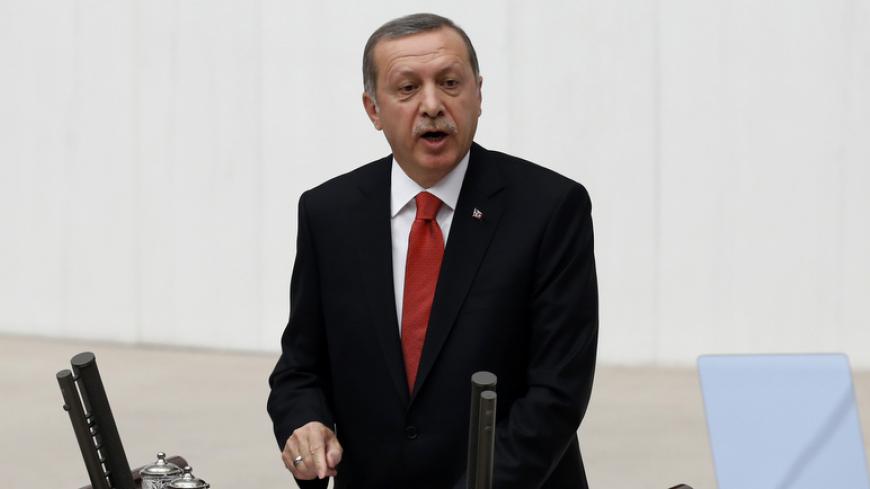 Turkey's President Recep Tayyip Erdogan addresses the Turkish parliament during a debate marking the reconvening of the parliament in Ankara, Oct. 1, 2014. - REUTERS/Umit Bektas

Erdogan responds to US, UN pressure

US Vice President Joe Biden said on Oct. 3 that "our biggest problem is our allies" in dealing with foreign fighters in Syria. He said that Turkey, Saudi Arabia and the United Arab Emirates “were so determined to take down [Syrian President Bashar al-] Assad and essentially have a proxy Sunni-[Shiite] war. … They poured hundreds of millions of dollars and thousands of tons of weapons into anyone who would fight against Assad — except that the people who were being supplied were [Jabhat] al-Nusra and al-Qaeda and the extremist elements of jihadis coming from other parts of the world."

Biden’s remarks, which provoked a sharp reaction from Turkish President Recep Tayyip Erdogan, came in the context of Biden describing the recent changes in the approach of US regional allies in dealing with terrorist groups in Syria and Iraq.

After allowing what Kadri Gursel called a “two-way jihadist highway” to develop between Turkey and Syria the past three years, Erdogan has begun a slow turnaround in his country’s approach to foreign fighters. This comes in response to increased pressure and scrutiny from the United States, including the US Congress, and the international community, as this column reported last month.

On Sept. 24, the UN Security Council, chaired by US President Barack Obama, unanimously adopted Resolution 2178, which includes the threat of sanctions against those who assist foreign fighters in Syria.

Ahmet Insel reports this week in Radikal (translated by Al-Monitor) that Resolution 2178 was a warning that “the Turkish government may well come under UN pressure.”

Erdogan spoke in favor of Resolution 2178, noting that his country had been the victim of terrorist attacks and claiming that the international community had reacted with “inertia” against the threat.

This week, the Turkish parliament authorized the use of military force in Iraq and Syria.

In response to Biden’s comments, Erdogan said Oct. 4, “Foreign fighters have never entered Syria from our country. They may come to our country as tourists and cross into Syria, but no one can say that they cross in with their arms,” adding that Turkey had prevented 6,000 jihadists from entering Turkey and had deported another thousand.

“If Turkey’s engagement against IS [Islamic State] produces positive results, this will not only strengthen Erdogan’s hand at home but also help him regain his reputation in the West as an important regional player. If, however, this engagement aggravates Turkey’s refugee problem, endangers its security and harms the 'Kurdish opening,' this could harm his reputation at home, even among supporters, as well as the AKP’s [Justice and Development Party] chances in the elections,” writes Idiz.

The number of Syrian refugees in Turkey is approaching 1 million.

Turkey’s stated goal in Syria is to set up a buffer zone that will allow it to safeguard its borders from terrorist attacks, which worries many Kurds.

Idiz writes, “There is also opposition from Turkey’s Kurds who believe that Ankara is only trying to get involved militarily in Syria and establish a buffer zone there ostensibly for refugees, to prevent Syrian Kurds from gaining an autonomous status similar to that of the Kurds in northern Iraq.”

The siege of Ayn al-Arab (known as Kobani among Syrian Kurds) by IS fighters has exacerbated tensions between Turkey and the Kurdistan Workers Party (PKK). The PKK is linked to the Democratic Union Party (PYD) of Syria and the People’s Protection Units (YPG).

The YPG is considered among the most effective of the Syrian armed groups, but does not receive support from the United States or its allies because of its links to the PKK.

Ankara has not allowed PKK fighters in Turkey to cross the border and join Syrian Kurdish forces, and has stood by while Syrian Kurds have been forced to flee the IS assault.

The PKK’s top military commander, Cemil Bayik, told Amberin Zaman that Turkey’s stance toward Syria has contributed to a breakdown in the peace talks, and warned that “we may resume our war.”

Tulin Daloglu reports that Turkey could also have to contend with its own citizens joining IS. A study by the Soufan Group and the International Centre for the Study of Radicalization estimates that of the 11,000-12,000 foreign fighters, approximately 400 are Turks.

Biden’s remarks, and the beginnings of a turnaround on Turkish policy, should come as no surprise to readers of Al-Monitor. This column wrote back in January that the next phase of counterterrorism would involve some “tough talk with US allies Saudi Arabia, Turkey and others that can do more to stem the flow of foreign terrorists and weapons to Syria.” A column in February warned of the possible blowback of Turkey’s approach to foreign fighters in Syria.

Edward Dark reports from Aleppo that some supporters of the Syrian government are anxious about the US airstrikes against IS.

Dark quotes Ammar, a Baath Party member: “We were once a powerful nation and a big player in the region. Look at us now — even tiny Bahrain is bombing us. We’ve become a laughingstock.”

Dark writes, “They have been quite outspoken in their hostility toward the coalition’s strikes in Syria. Even groups that had previously received advanced US weaponry, such as Harakat Hazm, have come out against it, fearing a backlash should they be seen as US stooges.”

These forces find fault with the United States for targeting Jabhat al-Nusra, which is well regarded due to its fighting ability, and for failing to hit Syrian government forces.

Mohammed al-Khatieb, also reporting from Aleppo, writes that the first wave of US airstrikes did little to change the battle lines between the opposition and IS:

“There are no tangible results on the ground yet for the US-led alliance strikes on IS locations in Syria. Six days in, the organization still stands its ground in the areas it acquired before the strikes began. Moreover, the opposition’s position, which is tending more to defense rather than attack, has not changed with the arrival of military help or weapons. The rebels are also reluctant to drain their energy and resources fighting IS for fear that the regime might take advantage of their efforts.”

In an interview with Ben Caspit and other members of the Israeli media, the Israel Defense Forces’ chief of staff Benny Gantz reflected on the danger posed to Israel by IS.

Gantz told Caspit, “We understand that a challenge waits for us on the other side. At the moment, the only thing that separates us from IS is the fact that they are busy with more pressing issues. It is possible that the day will come when we will have to contend with them.”

When asked whether coalition airstrikes alone could bring down IS, Gantz expressed doubt and favored a Syrian-authored solution.

Gantz said that the defeat of IS “can’t be achieved only through an aerial assault. I heard what Gen. Martin Dempsey, the American chairman of the Joint Chiefs of Staff, had to say and I understand his point. It makes no sense that America should also fight on the ground on behalf of the people threatened by IS. It makes more sense that those people organize the necessary ground forces themselves.”