Should armed groups allied with al-Qaeda be included in Syria peace talks?

Our answer is no; Erekat’s “main priority is not to allow IS to raise its flag in Palestine”; Turkey responds to Biden with fake news. 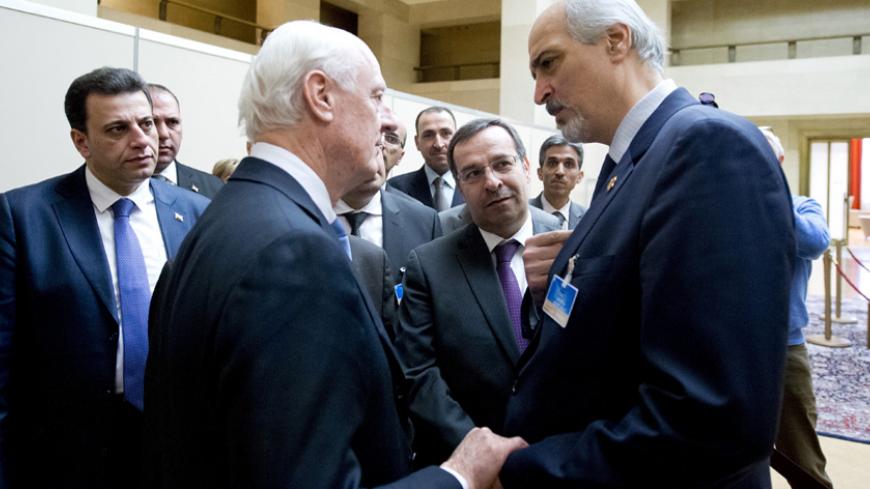 No concessions to al-Qaeda allies at Geneva talks

In a potentially encouraging sign, the High Negotiations Committee, the Saudi-backed Syrian umbrella opposition group, has agreed to attend the UN-mediated Geneva peace conference. The committee is saying, however, that it will not meet with the government delegation until the Syrian military ceases bombardment of rebel-held areas and lifts the siege of opposition-controlled towns. UN Syria envoy Staffan de Mistura will shuttle between the delegations in what are deemed “proximity” talks.

According to press accounts, the United States and Russia seem to agree on the broad outline of a two-year transition plan that envisages moderate Syrian opposition political figures and fighters merging with the Syrian state over several years, with the question of the fate of Syrian President Bashar al-Assad deferred until the end of the transition. The United States and Russia still publicly disagree on whether Assad should stay or go at the end of the transition.

While we continue to support de Mistura’s diplomacy and are encouraged by the committee’s willingness to participate in the Geneva talks, the key trend to watch is actually in Syria, where last week government forces, backed by Russian air power, achieved significant gains in the strategic Latakia region. In addition, this column recently explained how Aleppo is the bridge to an endgame in Syria. Just this week, Syrian armed groups, including Ahrar al-Sham and other rebel forces, joined with Jabhat al-Nusra, the al-Qaeda affiliate in Syria, to rally against advances by the Syrian military and its allies around Aleppo.

So let us state again, for the record, and in response to the bewildering advocacy effort to open the door to Ahrar al-Sham — al-Qaeda’s brother in arms and fellow believer in Sharia rule for all — that the United States should keep Ahrar al-Sham, the Army of Islam (Jaish al-Islam) and any and all Jabhat al-Nusra collaborators out of the Syria peace talks. Jabhat al-Nusra is the Syria affiliate of al-Qaeda, the same group killing innocents around the globe, the perpetrator of the 9/11 attacks on the United States, and the committed enemy of the United States and its people, values and allies. The evidence of the collaboration among Ahrar al-Sham and other groups with Jabhat al-Nusra is well documented, including in wire and press accounts of the recent battles around Aleppo and elsewhere. It might also be worth rereading the column by Ali Mamouri, who dissected the hateful and divisive ideology of Zahran Alloush, the former commander of the Army of Islam who was killed in Syria in December, to understand why these individuals and groups do not at all fit the objective of a secular and nonsectarian Syria.

Such groups are a disservice to the aspirations of Syrians who rose up in 2011 to call for a more transparent and inclusive government. Many of those good people, who support a unified and nonsectarian Syria, are represented among the Syrian opposition groups. Their voices need to be heard and not drowned out by the agents of sectarianism and hate, even if those Salafi groups have forces “on the ground.”

The Syrian government, for its part, should immediately heed UN calls to bring humanitarian relief and assistance to besieged cities, in accordance with UN Security Council Resolution 2258.

Adnan Abu Amer reported this week from Gaza that Hamas finds itself in a bind over the recent tensions between Iran and Saudi Arabia. This is nothing new for Hamas, which lost some Iranian backing in 2011 after it withdrew support for Syria, an ally of Iran.

“Further complicating the issue, Hamas is aware that Iran’s influence in the region could increase now that the international sanctions have been lifted, at a time when the Saudi economy is deteriorating due to declining oil prices,” Abu Amer wrote.

Hamas politician Ahmed Yousef told Abu Amer that Iran had indeed reduced, but never stopped, providing assistance to the group’s military wing, adding that the Palestinian resistance counts on Iran’s backing and that Iran benefits from the leverage it gains with the support.

The Palestinian Authority, which is dependent on Saudi Arabia for financial aid and assistance, has rallied to the kingdom’s side in its dispute with Iran. Palestinian chief negotiator Saeb Erekat told Aaron Magid, “The Iranians should stop poking their noses into the affairs of others or exporting their revolution.”

Asked about Palestinian President Mahmoud Abbas’ participation in Fatah’s 51st anniversary celebration in Damascus, where Abbas reportedly praised Assad, Erekat told Al-Monitor, “We said from day one that we would not have any interference in the events of Syria.”

“There are 600,000 Palestinian refugees in Syria,” Erekat said. “When Fatah holds any of its annual support [celebrations] in Moscow — we have Palestinians there — it is with President [Vladimir] Putin and President Abbas. We ache for what is going on in Syria. But we are guests in Syria and not citizens.”

Erekat conveyed an urgency about the potential threat from the Islamic State (IS). “My main priority is not to allow IS to raise its flag in Palestine,” Erekat said. “We must defeat IS and extremism. Judaism to me is not a threat. Judaism is one of God’s religions, like Christianity and Islam. Our conflict is not a religious one. IS today is killing Iraqis, the French and Turks; no one sympathizes with them. If IS begins to kill Israelis, who do you think in the Islamic world will condemn them? No one.”

It is worth recalling here the very first Week in Review, published in November 2012, where we noted that Iran “has the wherewithal to shift the equation and provide some payback, even in those areas where its adversaries allegedly hold sway and hegemony.”

Semih Idiz reported that the visit to Turkey last week of US Vice President Joe Biden served to highlight a growing disconnect between Washington and Ankara over Syria policy.

“Many analysts see Biden’s awkward talks with President Recep Tayyip Erdogan and Prime Minister Ahmet Davutoglu as a harbinger of tense moments to come in what are already strained ties between the two countries,” Idiz reported.

Biden criticized the government’s treatment of journalists and academics who are critical of the Erdogan government, provoking a backlash from the Turkish establishment media. Mustafa Akyol explained how pro-government media outlets promoted a blatantly untrue story that Biden had backed a US Senate-mandated arrest of American academics who had claimed US government complicity in the 9/11 attacks. There was of course neither such a Senate vote nor such arrests, but the latest fake news blitz served as a retort to Biden’s criticism and is consistent with Erdogan’s spin that “neither Europe nor any other country has as much media freedom as Turkey. In those countries, you cannot attack the president or the prime minister.”

“However,” Idiz wrote, “differences with regard to the Democratic Union Party (PYD), the umbrella organization of the Syrian Kurds, and the People's Protection Units (YPG), its military wing, emerged as the principal stumbling block in Biden’s talks with Davutoglu and Erdogan.”

Turkey wants the PYD banned from the Geneva peace talks on Syria. The United States considers the PYD a reliable ally in the fight against IS. Given the urgency of the Syria crisis, and the beginning of UN brokered proximity peace talks in Geneva, we can only expect these disagreements to worsen.