Obama: no safe haven for al-Qaeda in Syria 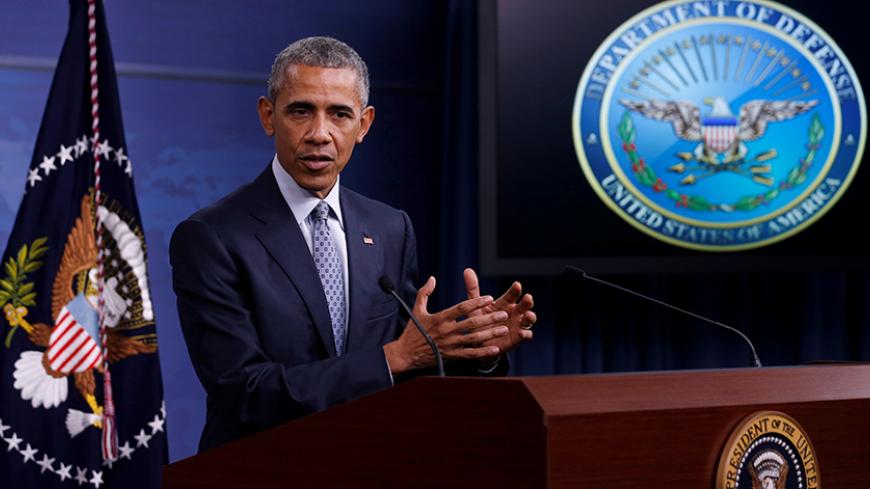 US President Barack Obama said that the United States will “continue intense fire efforts against al-Qaeda in Syria, which, no matter what name it calls itself, cannot be allowed to maintain a safe haven to train and plot attacks against us,” after meeting Aug. 4 with his national security team at the Pentagon.

Mona Alami provides background and context for Jabhat al-Nusra’s decision to “rebrand” its affiliation as distinct from al-Qaeda. Jabhat al-Nusra’s announcement — as this column reported last week — was a sign of its desperation following US-Russian negotiations on military and intelligence coordination against Jabhat al-Nusra and the encirclement of Aleppo by Russian- and Iranian-backed Syrian troops.

Alami explains that Jabhat al-Nusra’s name switch was well-vetted among al-Qaeda’s non-Syrian intelligentsia, including “major jihadi ideologues such as Sheikh Abu Muhammad al-Maqdisi and Abu Qatada … two influential Jordanian Salafist jihadi clerics with close links to al-Qaeda.” The Conquest of Syria Front (Jaish Fatah al-Sham) rebranding was designed to emphasize Jabhat al-Nusra’s “local” Syrian bona fides in order to rally other armed groups to the “Conquest” banner. Last week, "New Jabhat al-Nusra," Ahrar al-Sham and other armed groups launched an offensive against Syrian troops in Aleppo, an alleged sign of the “success” of the switch, according to their spin, although this column and other institutions, including Amnesty International, have documented the alignment of Ahrar al-Sham and other jihadi groups with Jabhat al-Nusra for some time.

Mohammad al-Khatieb reports from Aleppo that the battle for the city is “life or death” for both the government and the armed groups there. The potential for a worsening of the already alarming humanitarian crisis is likely. ”Extremely difficult and inhumane conditions could be in store for the residents should the blockade continue amid the lack of fuel and the gradual depletion of food stocks,” Khatieb writes.

Obama, while keeping focus on the threat from both al-Qaeda and the Islamic State, also decried Syrian military tactics as “deplorable” and a sign of the Assad regime’s “depravity.” He said that Russia has so far “failed to take the necessary steps” that would allow Washington and Moscow to reach agreement on military coordination against terrorist groups in Syria, as Laura Rozen reports.

The Obama administration is commendably balancing the urgency of keeping up an aggressive offense against international terrorist groups in Syria, support for UN-brokered efforts to resume political talks on a transition and mitigation of the humanitarian consequences of the war. This column has consistently backed the administration’s approach, which depends first on US-Russian cooperation, which does not come easy. One might imagine the high fives and prayers of gratitude among al-Qaeda and their jihadi cohorts if the United States stepped back from finding common ground with Russia and instead attacked the Syrian government, as advocated by some critics of the president’s policies, which would have the effect of giving the “Conquest” coalition a reprieve. It would be irresponsible, or “completely screwed up,” as US Secretary of State John Kerry said last month, to take the pressure off Syria’s al-Qaeda affiliate (by any other name) and its jihadi allies as they reveal their desperation in advance of a perhaps defining battle.

Muqtada al-Sadr may be losing the street in his efforts to challenge Iraqi Prime Minister Haider al-Abadi, reports Mustafa Saadoun from Baghdad.

Sadr seemed unable to rally the numbers he has in the past for anti-government rallies in Baghdad last month, a sign that Iraq’s civil society movement may be splintering and reconsidering its ties to the divisive cleric.

“Sadr has the upper hand today in the protest movement in Iraq, as civilians see themselves as part of the Sadrist movement in one way or another,” Saadoun writes. “Ultimately, Sadr seems to dominate the upper level of popular movements and protests in Iraq, despite the softness of his speech at times. But in fact, the slogans that are being raised in Baghdad’s Tahrir Square emulate the ones set by his followers."

He continues, “Nevertheless, some continue to bet on Madaniyoun [secular civil society group] to retake the lead in the protest movements and preserve their civil society aspect and even their civilian one, given that Sadr militia members are part of the PMU [Popular Mobilization Units] fighting the Islamic State. This will not be an easy task for the group given the Sadrist movement’s human and material capabilities, not to mention its legacy and name, which can be used to mobilize large numbers of followers.”

Mohammad Salih reports on the machinations of former Iraqi Prime Minister Nouri al-Maliki, who may be plotting a comeback. Maliki, who leads the State of Law Coalition — the largest Shiite block in Iraq’s Council of Representatives (parliament) — visited Sulaimaniyah last month to meet with leaders of the Patriotic Union of Kurdistan (PUK) and Movement for Change (Gorran) parties, which formed an alliance in May. Maliki did not meet with Massoud Barzani, the president of the Kurdistan Region of Iraq, sparking questions about Maliki’s ultimate intentions.

Salih speculates that Maliki’s prospects for a return to power are “unclear.” He writes that the former prime minister “not only has strained relations with large segments of Iraq's Kurdish and Sunni communities, but also seems to have a serious popularity deficit among Shiites as well. He has been a constant subject of popular anti-corruption protests, as his government was viewed as corrupt and incompetent by many Iraqis. It also remains to be seen whether the meetings between Maliki and PUK-Gorran leaders will lead to joint efforts in the Iraqi parliament in the coming months.”