Controversy simmers over what exactly happened in Cizre as the town emerges devastated from a weeklong curfew, imposed with the stated aim of uprooting Kurdish militants entrenched in residential areas. 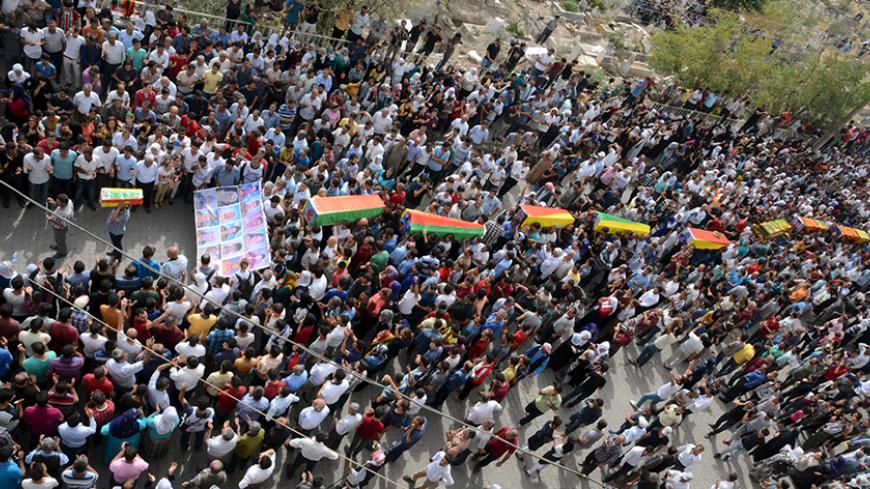 Residents carry coffins of people who were killed during the clashes in Cizre, in the Kurdish-dominated southeastern province of Sirnak, Turkey, Sept. 13, 2015. - REUTERS/Stringer

CIZRE, Turkey — At the entrance of the Nur neighborhood in Cizre, the Oytun family’s house stands as a grim testament of the bloodshed that unfolded in this mainly Kurdish city after Turkish authorities cut it off from the outside world in early September. The walls of the two-story house are riddled with bullets, and a pile of large rocks blocks the entryway.

One has to climb over the rocks to enter the courtyard, where the house’s mistress Kevser Oytun stands with tearful eyes, showing journalists a handful of bullets. She says she extracted them from the walls. A hole gapes in the bathroom door. The refrigerator, too, is riddled with bullet holes, as is the closet where she keeps the bedding. Even the mattresses in the closet are perforated. “What wrong did I do to deserve this?” she asks, no longer able to control her tears.

Her husband, Turan, says they barely escaped with their lives. Cizre was placed under a round-the-clock curfew in the afternoon of Sept. 4 as special police forces moved in for what the authorities said was an operation to purge the area of the Kurdistan Workers Party (PKK) militants holed up in residential areas. Neither the media nor lawmakers and ministers could enter the city until the morning of Sept. 12, when the curfew finally ended amid reports of many civilian deaths, including children.

“Our house is wrecked. The air conditioner, the fridge, the TV set, everything is gone. We barely survived,” Turan told Al-Monitor. “For nine days, we hid inside this house — a total of 23 people — without water, food and electricity. The kids kept crying. Some of us hid in the rooms, others in the basement or in the back of the house. There were two military vehicles firing in our direction.”

Dozens of houses in Cizre have emerged in the same shape from the curfew. Scenes reminiscent of a war zone are seen also in the Cudi and Yafes neighborhoods, but the Nur neighborhood has clearly sustained the heaviest damage. The bullets have spared almost no building in the area, the sight bringing to mind the Syrian Kurdish city of Kobani after fierce clashes there between the Islamic State and Kurdish forces earlier this year. The streets are littered with ditches, rocks and sandbags, intended to block the entry of police vehicles. Curtains and drapes hang across streets, in what locals describe as a protection against snipers, a familiar sight from Syria.

Walking through the narrow streets is not easy. One has to jump over ditches and climb over barricades. This could be a deadly endeavor, as journalists witnessed soon after the curfew ended Sept. 12. Hours after the media flocked to Cizre, a powerful explosion rocked the city. Rushing to the site of the blast, journalists found three wounded boys lying bloodied in the street. The boys had tinkered with an object they found at a barricade, unknowingly causing the explosion. Who planted the explosives remained unknown as recriminations flew through the air and warning signs were placed at barricades.

Pointing at the bullet marks on the walls and windows of the neighborhood mosque, Mehmet Guler told Al-Monitor, “The call to prayer stopped for nine days here. What would you expect from people who prevent even the call to prayer? The kids were terrified, their psychological well-being is ruined. Only two rifle grenades were fired [at the security forces], there were no rockets as they claim. Power and water was cut. Getting food was also a problem to some extent. We had to hide in the basement until the unrest was over.”

Public infrastructure was also damaged in the clashes, leaving residents without water and electricity for days. Beside bullet-ridden car wreckages and thousands of empty shells littering the streets, one notices gaping holes in the walls. According to locals, residents themselves created the holes to move safely from one house to another. Pointing to an open drainage canal, one resident said, “Some people used this canal, too, to move from one house to another.”

A boy kneeling over some 10 dead pigeons lamented, “My pigeons also died — some of hunger, some of bullets.”

The wall writings in the Nur neighborhood are another illustration of the acrimonious climate. Some praise the PKK and its affiliate organizations. Others are nationalist messages glorifying the Turkish state. One graffiti, for instance, proclaims “the Republic of Turkey is here” and is signed as “the Turkish Revenge Brigade” — a shadowy group that gained notoriety with extra-judicial killings of Kurds in the 1990s. Images of jailed PKK leader Abdullah Ocalan adorning the walls are also riddled with bullets.

The death toll from the operation in Cizre remains a matter of serious controversy. According to the pro-Kurdish Peoples’ Democratic Party, more than 20 civilians were killed — from a 25-day-old baby to a man in his 70s. Yet the governor of Sirnak province, where Cizre is located, said in a statement up to 42 PKK militants were killed and 25 police officers injured, making no reference to civilian deaths. In a television program on Sept. 10, Prime Minister Ahmet Davutoglu also argued that no civilians were killed.

Human rights activists who toured Cizre after the curfew called for accountability and a comprehensive investigation into what really happened in the city.

Reha Ruhavioglu, a senior member of the Association for Human Rights and Solidarity with the Oppressed, told Al-Monitor, “At this stage, the responsibility cannot be placed on one side only. For three decades, the PKK has waged an armed campaign in rural areas, but now it has taken it to urban areas as well. The curfew was said to be in response to clashes in some neighborhoods. This, however, can in no way justify why an entire city was cut off from the media, human rights groups, lawmakers and even ministers for eight days.”

Ruhavioglu said the PKK’s youth branch, the Patriotic Revolutionary Youth Movement (YDG-H), had dug ditches and planted booby traps in residential areas to block the access of the security forces, but stressed urban warfare alone cannot explain the outcome. “The security forces appear to have treated entire neighborhoods as an enemy position and responded accordingly,” he said. “It’s unclear who killed some civilians, who went out while the sides were clashing.”

The rekindled conflict between the PKK and the security forces has reached an alarming point, Ruhavioglu said. “The PKK should unilaterally declare a cease-fire, and the state should respond positively and stop military operations,” he added.

Nusirevan Elci, head of the Sirnak Bar Association and a Cizre resident, said the authorities had acted outside the law, stressing that round-the-clock curfews of such a length were unseen even at the height of the Kurdish conflict in the 1990s.

“No doubt, the state is supposed to pursue wrongdoers. But this should be done in the way it is done in Ankara and Istanbul. The state is obliged to protect the lives of civilians as a first and foremost duty. Security forces shelling indiscriminately the place … is unacceptable, both in legal and humanitarian terms,” Elci said.

The lawyer believes the local authorities in Cizre misled Ankara about the situation on the ground. “The interior minister first spoke of one civilian death, then the prime minister said no civilians were killed. I think this is because the local authorities were relaying misleading information to Ankara,” he said.

“The government should immediately launch an investigation into what happened. … Those responsible should be brought before justice or one cannot get out from under this,” Elci said, adding that his bar association would pursue the issue in the courts.