Kurdish residents of a town cut off from the outside world tell Al-Monitor of their "primitive" existence in basement shelters as Turkish soldiers and police battle Kurdish militants entrenched in residential areas. 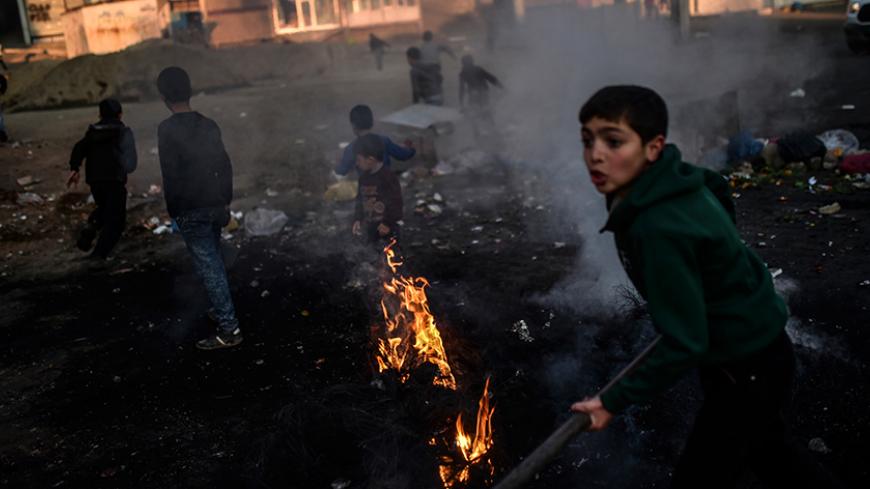 Kurdish boys run away as Turkish police forces shoot in the air during a demonstration against security operations against Kurdish rebels in the southeastern Turkish cities of Cizre and Silopi, Dec. 21, 2015. - BULENT KILIC/AFP/Getty Images

DIYARBAKIR, Turkey — It started as a relatively quiet Sunday in Cizre, a flashpoint town in Turkey’s predominantly Kurdish southeast where a bloody security crackdown is underway against Kurdish militants holed up in urban areas. Around noon Dec. 13, however, residents were gripped by fear as the town’s teachers, most of them natives of western Turkey, received unusual text messages from the education authorities, advising them to return to their hometowns for training starting the following day. The locals saw the messages as an omen of a looming large-scale security operation. The state, they believed, was evacuating its teachers before descending on Cizre in force. They were not mistaken.

In a matter of hours, hundreds of teachers left Cizre as thousands of soldiers and police headed to the town, backed up by tanks and armored vehicles. The authorities had ordered the purging of barricades and trenches from several neighborhoods. They had been manned since the summer by armed members of the Patriotic Revolutionary Youth Movement, the youth wing of the Kurdistan Workers Party (PKK), in a bid to seize control of various urban areas across the southeast. Anticipating a lengthy around-the-clock curfew, the locals rushed to supermarkets to stock up on food.

Later that evening came the expected curfew, the second since September, when 21 civilians, including children, perished in the clashes. Gunfire and explosions rang through the town the next day, this time coupled with the sound of tank engines and fire.

Sadun Taskin, a street vendor, watched his son die in his arms in September. Ozgur, 18, was shot in the street attempting to reach his uncle’s home, which had electricity thanks to a generator. The wounded boy could not be taken to a hospital because an ambulance would not or could not enter the besieged neighborhood. When Cizre was placed under a curfew anew, Taskin was quick to take his family to the home of relatives in a nearby village, spurred by a question his young daughter asked.

“When the gunfire began she said, ‘Are they going to kill us like my brother?’ This prompted me to get out. I can’t watch my children cry. Maybe their mental states will get better if they stay here a couple of months,” Taskin told Al-Monitor by telephone Dec. 21.

The Taskins, who have five daughters and a baby boy, are now waiting for the clashes in Cizre to end. In the meantime, Sadun is out of work and the children out of school.

Unlike the Taskins, the Cagirca family remains in Cizre, reliving their September ordeal. The family made headlines back then when they were forced to keep the body of their daughter Cemile, 10, — shot dead while playing in the street — in a deep freezer, barred from going out to bury her.

Reached by telephone on Dec. 21, the slain girl’s father, Ramazan Cagirca, let this reporter listen to the sound of shelling and gunfire, saying that the neighboring house was taking hits.

“There is no electricity. We are living in the basement. The food is limited, but we are managing. We are baking bread,” he said. Cagirca explained the family had nowhere to go, and a total of 28 people were now sheltered in his house.

“The kids are scared. The younger ones think it’s a wedding party with fireworks. The tanks and the shelling are causing serious destruction. The soldiers have not yet entered our neighborhood,” he said, before excusing himself and hanging up amid the sound of explosions.

Al-Monitor also tried to reach Abdullah Ozcan, who had lost a leg in September. He turned out to have moved to a village near Sirnak, the provincial center, so that his treatment was not disrupted. His brother Sait, who stayed behind with other family members, described a life “worthy of the primitive ages.” The family, he said, was making do on stale bread because “we are afraid they could fire at us if we draw attention by lighting” the stove.

He added, “We are in the middle of the clashes. The power has been out for eight or nine days. People can’t go out; snipers are opening fire. Sick people cannot go to the hospital. We are under siege. We can’t get our basic needs. Bread and water is a problem. Water was available only one day a week already; now it has been cut for nine days. … We sleep in the basement and keep away from windows. Neighbors have been shot. The kids are traumatized. We stay in the basement, 12 of us crammed in a space of 20 square meters [215 square feet].”

Irfan Inanc, a native of Cizre, said residents who lived through the 1990s, when the town was the focal point of clashes between the security forces and the PKK, were better prepared for the latest conflict.

“Grocery stores were not that many in the 1990s. We would stock up on food in advance. Those who moved to town in later years are inexperienced. In those years, we would keep our basements ready to use and move there as soon as we realized something was coming. And now we did the same,” Inanc told Al-Monitor by telephone.

“Having seen the 1990s, we had stocked up on food sufficient for a month. There is no food shortage in our neighborhood, but there could be a shortage of medicine,” he said, adding he was making his children watch cartoons to distract them from the clashes.

Residents of nearby Silopi, also under curfew, have been in a similar plight since Dec. 14, when some 10,000 soldiers and police were deployed to the two towns. The Turkish General Staff said Dec. 23 that 122 militants had been killed in the two towns, in addition to several dozen in other regions. PKK sources claim their losses are not that high but do not provide figures. At least four civilian deaths have been reported in the two towns, in addition to the wounding of a pregnant woman who lost her unborn child. A clear picture of what happened there will emerge only after the curfews are lifted.