Turkey, PKK clashes continue, but will there be a winner?

The spiral of violence that engulfed Turkey on July 20 is worsening by the day. 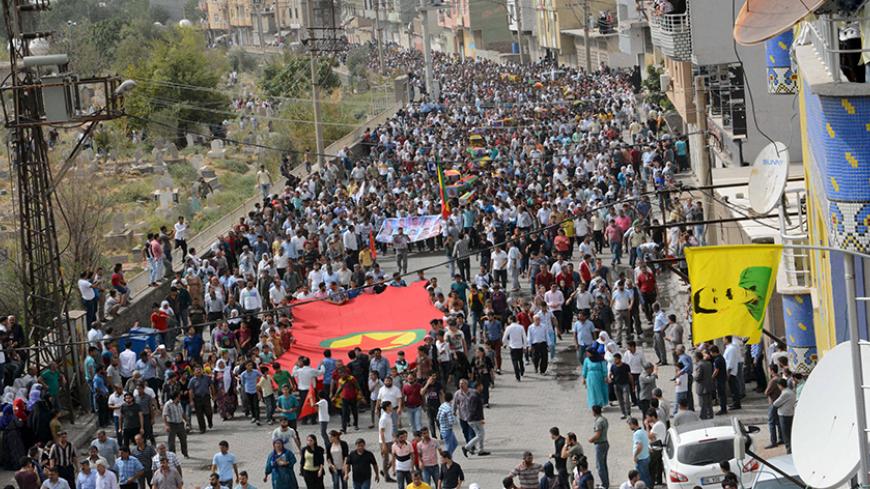 Residents carry a Kurdistan Workers Party (PKK) flag as they march with the coffins of people who were killed during clashes in Cizre, in the Kurdish-dominated, southeastern province of Sirnak, Turkey, Sept. 13, 2015. - REUTERS/Stringer

With violence sharply escalating on both sides, the social cost of clashes between Turkey and the Kurdistan Workers Party (PKK) is mounting. The most recent critical threshold crossed was reauthorization of the Turkish military, rather than government-appointed civilian provincial governors, to handle operations.

In an executive order sent to 81 provincial governors last week, the government transferred the authority to determine, plan and execute operations from governors to the military in 13 provinces where clashes are concentrated. The same order authorizes the governors to deploy the army in cities to control street demonstrations.

Civilian governors had been authorized since March 2013 to call for military operations against PKK targets. The new order reverts to earlier, security-heavy policies based on military measures in the struggle against the PKK.

The PKK has prepared extensively, at both the strategic-political and field levels, for violence. In towns such as Cizre, Silopi, Sirnak, Yuksekova and Semdinli, the PKK has introduced its concept of “self-government,” a bottom-up approach, to confront the state and security forces with urban guerrilla techniques. This PKK model calls on people to form armed "self-defense" forces in their neighborhoods and districts. This new approach allows the PKK, which keeps 10,000 of its militants in northern Syria, to save on manpower and resources while compelling Turkish security forces to deal with a new and unfamiliar style of struggle. The PKK is withdrawing into city centers and challenging the security forces to take them on there. This is why the Turkish security forces, which have gained considerable experience in rural combat, are having problems adjusting.

Another important dynamic of the PKK’s decision to set up neighborhood forces is its unusual granting of authority to local, military and political decision-makers to take action.

With this “franchising of violence,” the PKK is able to maintain its operational pace. The Turkish government, by increasing the authority of local military commands, has responded in kind to undermine the PKK’s advantages.

Questions that come to mind now include: How much will this localization of clashes escalate the level of violence, and what will it cost? The social balance sheet of clashes so far is somber.

According to data Al-Monitor acquired from open news sources, the balance sheet of the violence between July 20 and Sept. 13 shows:

Open news sources don’t offer reliable information on PKK casualties. The only number available was "1,116 PKK killed," reported by Turkey’s official Anatolian News Agency without quoting a source.​ However, security sources Al-Monitor consulted in Ankara say the PKK is likely to have sustained 250-300 fatalities, with about 70% of them in air attacks.

Intense clashes during a curfew in Cizre, a town of 150,000 people on the junction of Turkey’s borders with Iraq and Syria, offer substantial clues to the unfolding of Turkey-PKK battles.

Cizre, which has important historic connotations to the PKK in addition to its strategic location, was the scene of violence between the PKK’s young urban militias and Turkish security forces during the eight-day, 24-hour curfew.

The curfew was lifted the morning of Sept. 12. The PKK is trying hard to promote Cizre as "the new Kobani." The Turkish government is deeply concerned about the potential spillover of violence to other areas and has imposed extremely stiff security measures in the town. At the end of the day, it is the civilians who are suffering most in Cizre, where it will take a long time and a lot of effort to restore some semblance of normalcy. News reports coming out since the curfew was lifted are daunting and could indicate that more of the same is coming.

The important lesson to be learned is the soaring social costs of the continuing violence.