Will Turkey let UN officials snoop in the southeast?

The UN High Commissioner for Human Rights is demanding that Turkey allow UN officials to investigate alleged human rights abuses in the war-ravaged southeast of the country. 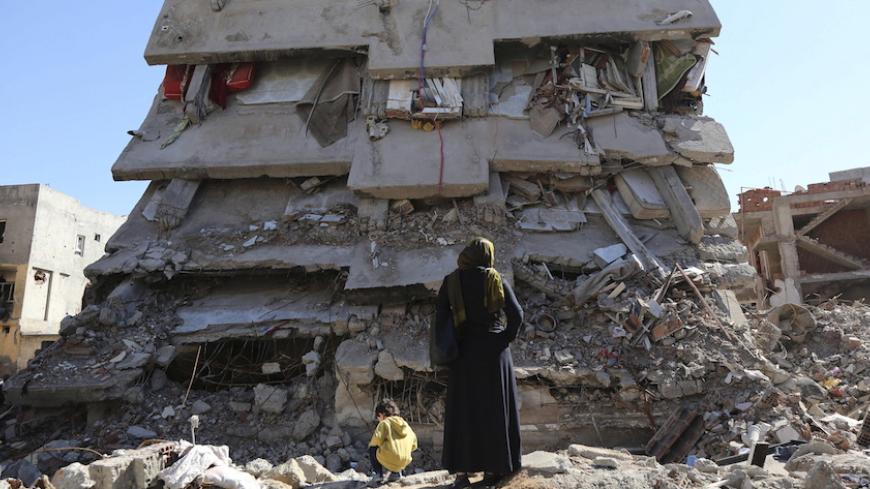 A woman looks at a building damaged during the security operations and clashes between Turkish security forces and Kurdish militants in the southeastern town of Cizre in Sirnak province, Turkey, March 2, 2016. - REUTERS/Sertac Kayar

Turkey’s US and European allies continue to maintain a near silence over the country’s steady descent into a human rights nightmare, even as respected global watchdogs chronicle the abuses taking place there on an almost daily basis. Whether it is silencing the media, torture during detention or mass violence against civilians in the mainly Kurdish southeast, according to rights defenders, Turkey is beginning to resemble the Middle East dictatorships that it was once touted as a model for them to follow.

Now, a new and critical voice has joined the chorus of rebukes: the United Nations High Commissioner for Human Rights. In an unusually harsh statement, the Geneva-based high commissioner, Zeid Ra’ad al-Hussein, lambasted Turkey over a list of shocking crimes the security forces are widely alleged to have committed during a 78-day round-the-clock curfew between December 2015 and March that was slapped on Cizre, a Kurdish majority town on the Iraqi border. A crucible of Kurdish rebellion since the 19th century, Cizre was the scene of some of the worst violence in the latest outbreak of fighting between the security forces and the outlawed Kurdistan Workers Party (PKK) that erupted in August 2015.

The Jordanian diplomat said he had received reports of “unarmed civilians, including women and children, being deliberately shot by snipers, or by gunfire from tanks and other military vehicles.” In videotaped comments posted on Twitter, Hussein elaborated on the “massive” and “highly disproportionate destruction of property” by the Turkish security forces.

“Most disturbing of all,” he said, “are the reports quoting witnesses and relatives in Cizre, which suggest that more than 100 people were burned to death as they sheltered in three different basements that had been surrounded by the security forces.”

One of the reports Hussein received was compiled by Mazlumder, a veteran pro-Islamic nongovernmental organization, whose team of human rights defenders has established a reputation for balanced reporting.

Over three days in early March, a Mazlumder team spoke to scores of government officials, politicians, lawyers, eyewitnesses and the families of the victims “in circumstances where there were limited possibilities to undertake this kind of work,” the report noted.

Its findings are not for the fainthearted: “Regarding the number of people killed [in Cizre] we don’t have a definite number. Many autopsies were made in different places … there were also instances when half a body was sent to Mardin while the other half was sent to Silopi for an autopsy because some bodies were decapitated. What was given to some families as the 'bodies' of their relatives was 4-5 kilograms of human remains, which looked like coal. … We think they were burned to death but not because something like petrol was poured on them and they were set on fire, but there was another kind of burning.”

This chilling excerpt is based on quotes from interviews Mazlumder conducted with members of the Bar Association in Sirnak, the provincial capital. If Hussein read the report, this may explain why he is so incensed.

In a press briefing, Turkish Foreign Ministry spokesman Tanju Bilgic said he regretted Hussein’s assertions, calling them “extremely one-sided.” He denied that UN demands to send a fact-finding mission had been rebuffed.

“We would be happy to receive Mr. Zeid in our southeast Anatolian region, should he so desire,” Bilgic said.

Legal experts agree that Hussein’s language goes way beyond the fuzzy cliches favored by international diplomats. But what real impact can his words have? “Even [US President Barack] Obama saying something wouldn’t transform a government’s behavior,” said Jamie O’Connell, a senior fellow at the University of California, Berkeley law school. “But the difference between leading rights groups like Amnesty [International] or Human Rights Watch making such comments and a UN official doing so is considerable,” he told Al-Monitor in an interview.

Some fellow academics are less sanguine. “President [Recep Tayyip] Erdogan long ago decided that condemnation from abroad is mostly meaningless — that, in the end, Turkey’s relations with the West are narrowly transactional,” Howard Eissenstat, an associate professor of Middle East history at St. Lawrence University, told Al-Monitor. “At least in the short term, he seems to be right.”

Hussein has called on the Turkish government to allow an “independent” and “unimpeded” investigation in Cizre.

In a thinly veiled reference to the PKK, which has killed dozens of civilians in recent suicide bomb attacks, Hussein said that “all the allegations, including those leveled at the groups fighting against the security forces,” need to be “thoroughly investigated, but do not appear to have been so far.” The UN official concluded, “This blackout simply fuels suspicions about what has been going on.”

Journalists who tried to find out were barred from entering Cizre; others became victims themselves. One of the charred corpses retrieved from the three basements belonged to Rohat Aktas, a senior editor at the pro-Kurdish Azadiya Welat newspaper.

“There are enormous restrictions on journalists and the curfew prevents scrutiny or monitoring of any kind,” Emma Sinclair-Webb, the senior Turkey researcher for Human Rights Watch, told Al-Monitor. “The Turkish government can’t have it both ways by saying that any allegation of what happened there [Cizre] is baseless if you are also not granting access.”

Ozgur Ogret, the Turkey representative for the Committee to Protect Journalists, said that any journalist who challenges the official narrative is under threat. “President Erdogan may continue to try to convince the world that Turkey is a country with media freedom but the counterevidence shows that it is constantly shrinking, if it hasn’t disappeared already,” Ogret told Al-Monitor in an email.

The pressure is also being felt by the pro-Kurdish Democratic Regions Party (DBP), which runs 107 municipalities in the southeast.

Kamuran Yuksek, the DBP co-chair, was arrested last week, joining scores of other party officials in jail. His purported crime was to have spoken out against the curfews “and nothing more,” his spokesman, Ramazan Tunc, told Al-Monitor.

The curfews are continuing in towns and villages across the southeast, where the security forces have failed to completely root out the PKK fighters embedded among the civilian population.

On Feb. 27, Turkey’s health minister, Mehmet Muezzinoglu, said 355,000 people had been displaced by the fighting; Sinclair-Webb reckons that figure may have doubled by now.

Though few dare to say so, many locals are as furious with the PKK for putting them in the line of fire as they are with the government for its heavy-handedness. “Just look at this,” said a shopkeeper, gesturing toward piles of rubble in Sur, a district in Diyarbakir, soon after the curfew was lifted there in March. “The PKK has caused all this destruction, for what?” he asked, echoing widespread sentiment among tradespeople in the city.

On May 11, Hussein sent a letter to the Turkish government renewing his request for “full and unhindered access” for a UN team to investigate the allegations of abuse in the southeast.

A spokesman for the Office of the UN High Commissioner for Human Rights told Al-Monitor on May 17 that Turkey had not responded.

Sinclair-Webb said, “Even if Turkey were to let the UN into Cizre, all the evidence is gone."