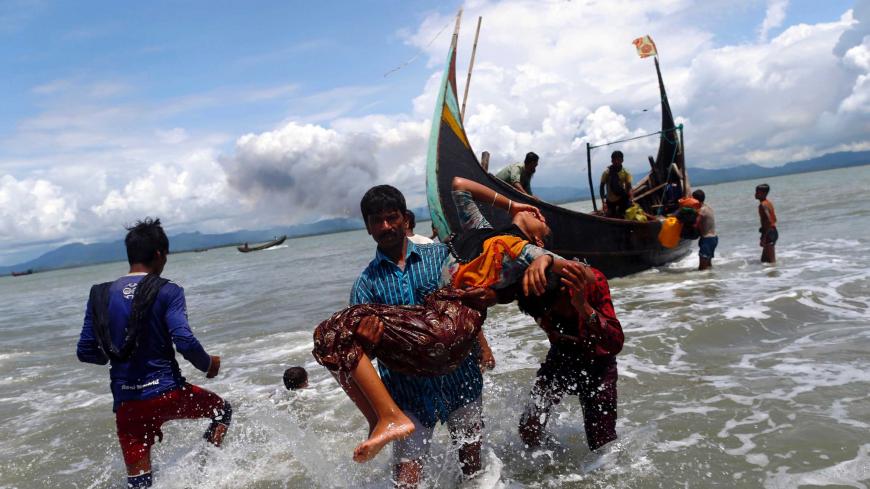 Smoke is seen on Myanmar's side of the border as an exhausted Rohingya refugee woman is carried ashore after crossing the Bangladesh-Myanmar border by boat through the Bay of Bengal, in Shah Porir Dwip, Bangladesh, Sept. 11, 2017. - REUTERS/Danish Siddiqui

Genocide is not a word Turks like to remember or use much because it brings to mind the most controversial issue of the country's history. Discussion of the Armenian genocide, a characterization of the tragedy that befell the Ottoman Armenians in 1915, is blasphemous for many Turks and, above all, for nearly all of Turkey’s political leaders, irrespective of their political conviction.

However, President Recep Tayyip Erdogan hasn't refrained from using the word “genocide” when he is outraged by calamities that befall Muslim peoples around the world. A couple of years ago, to the consternation of Chinese leaders, he used the word for the troubles taking place in Xinjiang, also known as East Turkestan. He had spoken of “genocide perpetrated against Uighurs,” referring to the Muslim Turkic community of China.

The word had been deleted from his lexicon for quite some time. Now, it's back. When the plight of the Rohingya people, the Muslim minority in Myanmar (formerly Burma) living next to the border with Bangladesh, made the news all around the world, he reacted with anger. “There is a genocide there,” he said. Speaking at his ruling Justice and Development Party's Eid al-Adha celebration in Istanbul, he didn't hesitate to criticize the passivity of the Muslim world and the alleged indifference of the West. “They remain silent toward this. … All those looking away from this genocide carried out under the veil of democracy are also part of this massacre.”

He then dispatched his wife, Emine, and his elder son, Bilal, to Bangladesh in a high-profile visit to observe the situation of Rohingya Muslims fleeing across the border. That was the first lady’s second visit to the Rohingya people; her first was in August 2012, when Rohingya Muslims were attacked by Myanmar’s Buddhists and armed forces. At that time, her daughter Sumeyye and then-Foreign Minister Ahmet Davutoglu accompanied her.

One of Erdogan’s sycophants in the government-controlled media has now called on the Norwegian Nobel Committee to take back the peace prize from the 1991 laureate, Myanmar’s de facto leader, Aung San Suu Kyi, and give it to Emine Erdogan. Suu Kyi received the prize for her courageous, nonviolent campaign for human rights and democracy, though she is being widely criticized now for her perceived apathy about the Rohingya crisis.

The president's consistent concern and sensitivity for the saga of the Rohingya people seemingly has to do more with his striving to become the champion of the world’s Muslims. His star has dimmed in the international arena, particularly in the Western world, and the turmoil in Myanmar presented him with a perfect public relations opportunity. A shrewd politician with roots in political Islam, Erdogan did not miss that chance, as speaking up could be regarded as a wise move to place him and Turkey on the moral high ground in the international political scene.

However, it's doubtful his Rohingya stance will be able to salvage his heavily tarnished reputation.

United Nations High Commissioner for Human Rights Prince Zeid Ra’ad al-Hussein, speaking before the Human Rights Council session Sept. 11, started his speech with a reference to the developments in Myanmar, saying, “Another brutal security operation is underway in Rakhine State — this time, apparently on a far greater scale.” The prince, after citing human rights violations in a number of countries, unexpectedly mentioned Turkey in the context of Myanmar.

Moreover, the official Myanmar line on the Rohingya issue has a striking resemblance to the state of affairs between Turkish authorities and the Kurds.

John Reed wrote in The Financial Times, “Aung San Suu Kyi has long echoed the official [insult] that the Rohingya are ‘Bengali’ nationalists being stirred to sedition by ‘terrorists.’ Burmese nationalism and Buddhist extremism have surged with democratization and the spread of communication technology in the former pariah state.”

It's well-known that Turkish officials see most Kurdish demands as illegitimate and the product of “Kurdish nationalism aimed at breaking apart Turkey.” They consider Kurdish insurgents terrorists. Given the millions of supporters of the pro-Kurdish Peoples’ Democratic Party (HDP), the third-largest force in the Turkish parliament, whose leader and 12 deputies are in jail, Erdogan’s qualification of the Rohingyas’ plight as “genocide” is not convincing. The practices underway against the Kurds, according to the HDP, are not much different.

According to UNICEF, more than 370,000 people — about 60% of them children — have fled from Myanmar to Bangladesh in less than three weeks. Many more reportedly remain trapped. The military operation of the Myanmar security forces is ostensibly a reaction to the Aug. 25 attacks by Rohingya militants against 30 police posts.

In Turkey, between July 2015 and December 2016, the resistance in a number of Kurdish-inhabited towns, including Cizre, Sur, Nusaybin and Sirnak, were disproportionately suppressed by the security forces. As a result, between 355,000 and 500,000 people were displaced, according to a detailed report by the UN Human Rights Office.

Such inconsistencies do not seem to deter Erdogan from carrying the banner of the Rohingya. He said the Rohingya issue will be discussed in detail when world leaders convene for the UN General Assembly gathering Sept. 19-25 in New York.

Yet those inconsistencies may cost him his ambitious objective: leadership of the world’s Muslims.