Deputy Foreign Minister Tzipi Hotovely made yet another questionable diplomatic move this week, boasting about an education agreement signed with Myanmar. 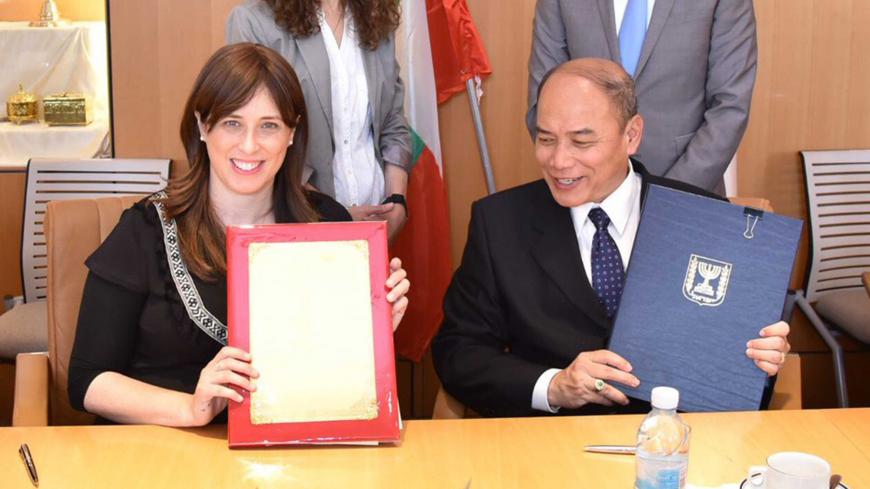 Israeli Deputy Foreign Minister Tzipi Hotovely poses with a representative from Myanmar in a photo uploaded May 28, 2018. - Twitter/@TzipiHotovely

No matter how hard one tries, it is difficult to understand why Deputy Foreign Minister Tzipi Hotovely is so proud of the May 28 educational cooperation agreement she signed with the government of Myanmar. She announced this “coup” in a tweet that also shows a photograph of her with a big smile for the camera, sitting beside a representative from Myanmar. She tweeted, “Continuing cooperation with our friends around the world.”

The “friend” in this case is a country condemned by the United Nations in 2017 for its “textbook ethnic cleansing” of the country’s Muslim Rohingya minority, including extrajudicial executions, rape and arson that drove more than 300,000 people out of their homes and into neighboring Bangladesh. These atrocities were widely reported in Israel, as everywhere else. The Foreign Ministry obviously knew all about them, as it did about the punitive arms embargo imposed against Myanmar by the European Union and the United States. These events are hardly ancient history. In fact, they took place during Hotovely's tenure as Israel’s top diplomat in her role as deputy minister of foreign affairs.

It seems that Hotovely failed to understand the outrage generated by her boasting of cooperation with a murderous regime tarred by ethnic cleansing even as Israel demands, rightly so, that the world never forget the Holocaust of European Jewry. Hotovely herself is involved in global campaigns against expressions of anti-Semitism. In a speech in March at the Global Forum to Combat Antisemitism, she warned of a troubling rise in this phenomenon. She also lashed out, justifiably so, at a recent speech by Palestinian President Mahmoud Abbas that appeared to deny the Holocaust.

The publication of the agreement with Myanmar generated outraged reactions, mostly in the forms of reactions on Hotovely’s Twitter account. Replying to Hotovely's Tweet, one user, Pnina Katz, wrote: "How can you be proud of connecting with a government responsible for genocide and the punishment and expulsion of thousands of people? You have lost all shame."

Following these attacks on social networks, Foreign Ministry spokesperson Emmanuel Nahshon issued a statement that read, “Like the rest of the world, Israel has diplomatic relations with Myanmar, which are expressed in a number of areas, including culture, agriculture and education. Israel does not sell weapons to Myanmar. We should celebrate the signing of an agreement with this country in the area of education.”

According to statements, the cooperation agreement includes a commitment by Myanmar to teach schoolchildren about the Holocaust and its lessons, anti-Semitism and xenophobia. But these statements and the explanation offered by the Foreign Ministry’s spokesperson were rejected by those who criticized the signing of the agreement. Some people attacked Nahshon. Israel’s former ambassador to Italy, Gideon Meir, wrote: "I do not blame you, but the people who sent you. Most especially delusional deputy minister. Agreements with such a human rights champion as Myanmar cannot be legitimate."

This is not Hotovely’s first diplomatic faux pas or the first time she has inflicted damage on Israel’s foreign policy and its relationship with the Jewish diaspora. In November 2017, Hotovely stirred up a storm among American Jews when she spoke dismissively of their (alleged) meddling in Israeli domestic affairs after the government reneged on a promise to allow pluralistic, egalitarian prayer at the Western Wall, Judaism’s holiest site. In an interview with i24 News, Hotovely said that most American Jews don’t understand Israel because they are “people that never send their children to fight for their country.” She added, “Most of them are having quite convenient lives. They don’t feel how it feels to be attacked by rockets, and I think part of it is to actually experience what Israel is dealing with on a daily basis.”

Her remarks elicited harsh reactions, and Prime Minister Benjamin Netanyahu, who also serves as foreign minister, was forced to step in, condemn what she had said and douse the fires she lit. “Diaspora Jews are dear to us and are an inseparable part of our people,” he said in a statement. “There is no room for such an attack, and its words do not reflect the position of the State of Israel.” He then punished her by canceling her planned official visit to the Czech Republic, but Hotovely did not apologize. On another occasion, Netanyahu reprimanded her for saying her big dream was to see the Israeli flag flying over the Temple Mount, a Jerusalem site holy to both Muslims, who call it the Haram al-Sharif, and Jews.

Hotovely, 39, is one of the best-known and influential figures in religious Zionism circles. She is a law school graduate, highly articulate and has a very good command of English, stemming from a stint as an Israeli representative to the Jewish community in Atlanta in the framework of her civil service. In complete contrast to her achievements as a woman in a religious, conservative society, she has repeatedly exhibited narrow-mindedness. Hotovely holds radical, rightist views, and her comments are often tinged with religious nationalism. On May 18, she declared in an interview with the newspaper Makor Rishon that the idea of a Palestinian state was defunct. She often introduces religious, right-wing content into her encounters with foreign and Israeli diplomats.

Hotovely is not among the most popular politicians in the Likud. In the 2015 election campaign, she came in so low in the party's primary, in 26th place, that she barely made it into the Knesset. Netanyahu nonetheless appointed her a deputy minister, devoid of administrative responsibilities. Casting her in the role initially appeared to be a smart move given her skills in public diplomacy, but it has since been exposed time and again as a lapse in judgment. The advantages of having Hotovely in the position are unclear, but the damage she causes is evident. Absent a full-time minister of foreign affairs, Hotovely’s views and conduct are likely to continue to generate even more diplomatic embarrassments for Israel.