Prime Minister Benjamin Netanyahu, who does not trust anyone to market his government’s policies, will address the UN General Assembly this week himself as Israel's top diplomat. 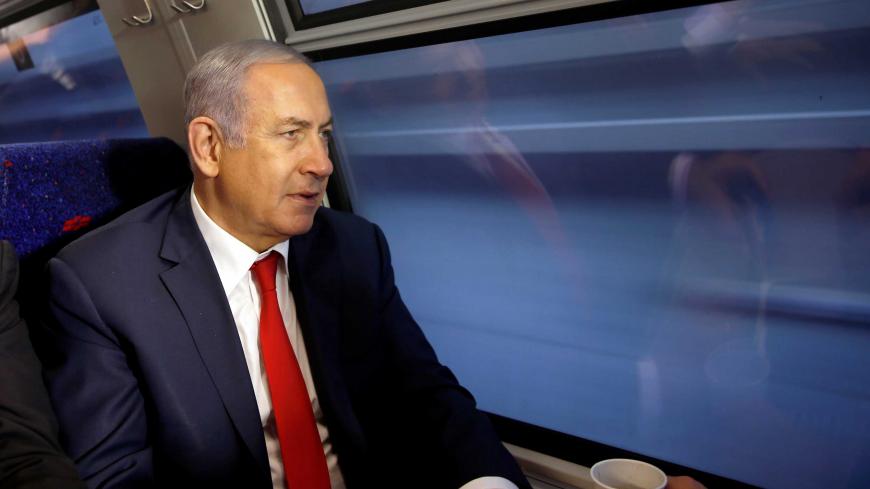 Israeli Prime Minister Benjamin Netanyahu looks out a train window as he participates in a test-run of the new high-speed train between Jerusalem and Tel Aviv, near Lod, Israel, Sept. 20, 2018. - REUTERS/Ronen Zvulun

For the last three years, Prime Minister Benjamin Netanyahu has kept the foreign affairs portfolio for himself. Earlier this month, the Israeli press reported that Netanyahu had promised former Chief of Staff Lt. Gen. (res.) Benny Gantz the foreign minister’s job in his next government. But Netanyahu’s office issued a denial, adding that the prime minister was “certainly pleased with his current foreign minister.”

Netanyahu is undoubtedly pleased with the foreign minister who stares back from his mirror each morning. Over the past decade, his has turned into the face of the nation. Most world leaders descending on the UN headquarters in New York City these days are accompanied by their foreign ministers. This double presence enables them to take advantage of the world’s largest diplomatic fair to strengthen their countries’ foreign relations and to present their political, security, economic, scientific and cultural wares.

The prime minister’s agenda is bursting at the seams. It includes issues relating to the occupation and the moribund diplomatic negotiations, the boycott movement and transfer of the US Embassy to Jerusalem, the Iranian-Syrian alliance and Islamic terrorism. Netanyahu, however, is an active foreign minister who takes part in numerous international forums and does not trust anyone to market his government’s policies.

“The Foreign Ministry has been relegated to the sidelines of Israeli diplomacy and only handles public diplomacy,” a top Israeli diplomat told Al-Monitor on condition of anonymity. “Absent a foreign minister, the defense agencies dictate foreign policy,” he added. The senior diplomat gave the example of the Second Lebanon War in 2006, in which the decision-making process was overtaken by the security system, sidelining diplomatic considerations. The Winograd Commission that the government appointed to examine the political and military handling of the war termed its results “a serious missed opportunity.”

The diplomat responded tersely when asked about the role of Deputy Foreign Minister Tzipi Hotovely. “The deputy minister is a joke devoid of professional significance,” he said. Hotovely and the ministry’s Director General Yuval Rotem are Netanyahu puppets. He appointed them to their jobs and he bears responsibility for their deeds and misdeeds. Netanyahu is the moving force behind Israel’s foreign service in matters big and small. On foreign relations, Foreign Minister Netanyahu prefers the advice of army people over that of professional diplomats.

In the initial years after his 2009 return to power, Netanyahu used the good offices of President Shimon Peres, with his stellar reputation on the world stage and extensive contacts. Peres advocated for the prime minister with US President Barack Obama, up until the moment he understood that Netanyahu had no intention of pushing ahead a two-state solution to the Israeli-Palestinian conflict. Netanyahu’s relations with incumbent President Reuven Rivlin also soured once the president dared to publicly criticize the prime minister’s discriminatory anti-Arab legislative initiatives. As far as Netanyahu was concerned, by criticizing him, the president (a former Likud member) has positioned himself as an opponent of Israeli nationalists.

Netanyahu is following in the footsteps of US President Donald Trump, who has made campaigns against liberal democracy and its agents in the political, legal and media arenas his signature. Both of them regard human rights and particularly those of Palestinians as the domain of wimpy leftists who undermine the Israel/America First doctrines. As far as Netanyahu is concerned, the people of Israel want rulers who expel African asylum seekers, not minority lovers who “have forgotten what it means to be Jewish," as he famously whispered to an aging rabbi in 1997 referring to the Israeli left.

Following this line of thought, many among the Israeli public do not concern themselves with the records of visitors to their country. Anyone who comes to Jerusalem is welcome, be it Hungarian Prime Minister Viktor Orban, whose election campaign carried anti-Semitic overtones, or Philippine President Rodrigo Duterte, who compared himself to Hitler.

Israel recently signed an education cooperation agreement with Myanmar and even boasted about it on social media this past May. “Continuing cooperation with our friends around the world,” Hotovely tweeted, bringing to mind the old adage “show me your friends, and I’ll tell you who you are.” Even the Trump administration, Israel’s greatest friend, has joined in the global condemnation of Myanmar for its ethnic cleansing of the Rohingya, including raping and massacring members of the Muslim minority. Israel signed the cooperation agreement with Myanmar even as the West was condemning them. Last March, the US Holocaust Museum in Washington revoked the Eli Wiesel Prize it awarded to Prime Minister Daw Aung San Suu Kyi over her refusal to condemn the crimes against humanity committed by her army. An appeal by a group of Israeli educators and academics for Netanyahu to abrogate what they termed the “shameful” agreement with Myanmar was ignored.

Netanyahu has replaced the semblance of a peace-loving leader he presented in his landmark 2009 Bar-Ilan speech (recognizing the two-state solution) and joint news conferences with Obama with a militant mien. On the international front, Netanyahu has placed two clones to his right — Culture Minister Miri Regev and Science Minister Ofir Akunis, both of whom are gung ho to savage anyone deemed “not one of us.”

Regev turned the Eurovision song contest that Israel is to host next May into a battle over Jerusalem, opposing the preference of the European Broadcasting Union (EBU) to hold it somewhere else in Israel. As expected, the EBU rejected Regev’s demand that the event be held in Israel’s contested capital. The EBU even demanded that Israel issue visas to all visitors to the event, regardless of their political views, and allow rehearsals on Saturday, the Jewish Sabbath.

Netanyahu decided the contest would take place in Tel Aviv. Nevertheless, the dispute played into his hands. The artificial clash with the EBU “proved” to Israelis that their country was still surrounded by enemies and therefore needs a strong leader in the prime minister’s residence who has a powerful friend in the White House.

Israeli scientists, who have generated great prestige for Israel, also fell victim to the prime minister's style of McCarthyism designed to portray the government as the victim of an imaginary leftist mafia. In July, Akunis blocked the appointment of top neuroscientist Yael Amitai to an Israeli-German scientific committee. Akunis, Netanyahu’s former spokesperson whom the prime minister named minister of science and technology, complained that in 2005, the world-renowned scientist had signed a petition urging Israeli soldiers to refuse to serve in the occupied territories. An appeal to Netanyahu by the Forum of University Heads to reverse the decision went unanswered.

Indeed, the prime minister who takes the UN podium on Sept. 27 to present Israel’s image does not need a foreign minister. All he needs is for gambling tycoon Sheldon Adelson and other members of his cheerleading squad to applaud from the visitors’ gallery. After that, come what may.