Iranians condemn the inaction of the United Nations with respect to the plight of Rohingya Muslims in Myanmar. 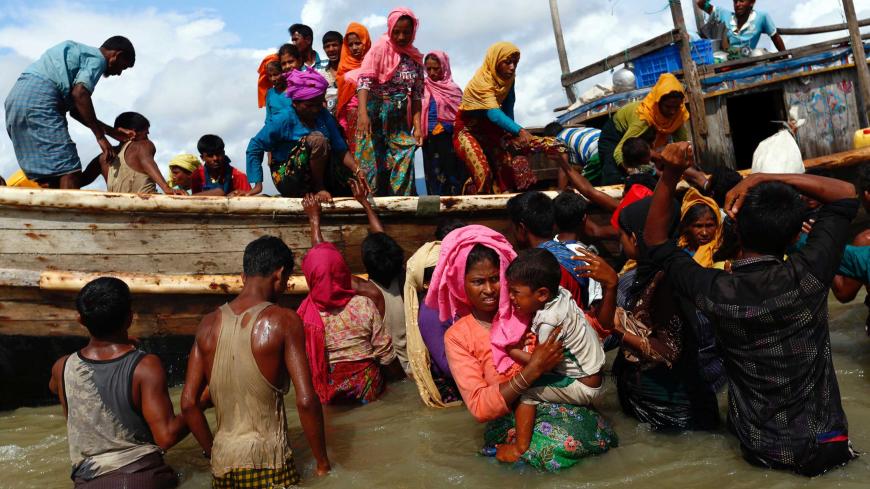 Rohingya refugees get off a boat after crossing the Bangladesh-Myanmar border through the Bay of Bengal, in Shah Porir Dwip, Bangladesh, Sept. 11, 2017. - REUTERS/Danish Siddiqui

The two presidents, speaking along the sidelines of the Organization of Islamic Cooperation summit on science and technology in Astana, Kazakhstan, over the weekend, stressed the importance of taking action to put an end to the violence against the Rohingya. Rouhani said in Astana that the plight of the Rohingya, along with other situations in the Muslim world, including Iraq, Syria, Yemen and Palestine, showed the need for unity.

Hundreds of thousands of Rohingya crossed through their country's border with Bangladesh after Myanmar’s army attacked their villages in Rakhine state. Myanmar’s army said its posts were attacked first by militants. Some of the Rohingya who fled to Bangladesh reported tales of atrocities by the army against civilians.

Rouhani said, “Iran’s humanitarian aid for the Rohingya Muslims of Myanmar will soon be shipped.”

Upon arriving in Tehran, Rouhani told reporters, “Although there was not much time for discussions, all the countries in attendance at the meeting agreed on the necessity of helping the displaced and applying pressure on Myanmar’s government to suspend the genocide.”

While Rouhani’s comments about Iranian and Turkish actions to provide aid to Rohingya Muslims were what made headlines in Iranian newspapers, the two presidents also discussed a wide range of other issues. Rouhani suggested that a new phase of bilateral relations between the two countries has begun, especially in trade, security and defense. Rouhani said he and Erdogan also discussed Erdogan’s upcoming trip to Tehran, working together with Russia over the issues of Syria and the referendum in Iraqi Kurdistan.

Much like in the rest of the world, the plight of Rohingya Muslims has received a great deal of media attention in Iran in recent weeks. Iranian students protested in front of the UN office in Tehran. They also submitted a sheet of signatures as a symbol of their protest.

The conservative Popular Front of Islamic Revolution Forces group signed an open statement condemning the violence against the Rohingya. The statement asked the Rouhani administration to apply diplomatic pressure not only on Myanmar’s government but governments who adhere to “American and European human rights,” a backhanded term meant to highlight double standards in how human rights are publicized. The statement said that if genocide against Muslims is not condemned, this would expedite future genocides against Muslims. The statement also said that there was a link between the “anti-Muslim” policies of the United States and Israel. However, the United States and the United Nations have condemned the Myanmar government's actions against the Rohingya. Israel has come under tremendous criticism because it provides weaponry to Myanmar's military; the United States, in contrast, has long had an arms embargo against the Myanmar regime.

A number of Iranian student groups also signed an open statement. The statement read that the “double standards of the United Nations Security Council with regard to Myanmar will result in the weakening of status of the Security Council and the United Nations among Muslims.” The statement also asked that the president and Foreign Minister Mohammad Javad Zarif address this issue with nonaligned nations. The statement also criticized that the genocide is taking place in a country led by a recipient of the Nobel Peace Prize, saying this shows the emptiness of the human rights campaigns by the West. Aung San Suu Kyi, the nation’s state counselor and de facto leader, won the prize in 1991. The army still retains much control of the country.