Historians warn the upcoming summit of the Visegrad Group in Jerusalem is a cynical play by Prime Minister Benjamin Netanyahu to ally himself with human rights abusers and Holocaust deniers for political gain. 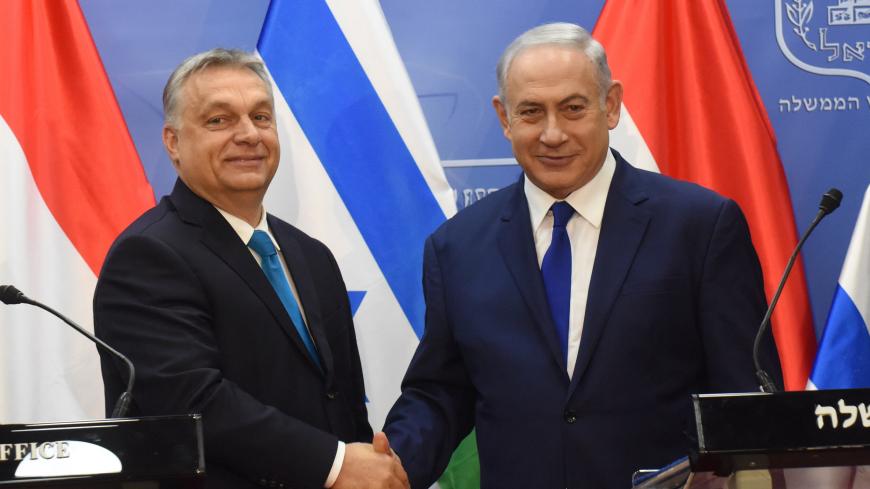 Just over 18 months after starring at the leadership summit of the central European Visegrad Group in July 2017, Prime Minister Benjamin Netanyahu will host the leaders of Hungary, Poland, the Czech Republic and Slovakia Feb. 18-19 in Jerusalem. Even the most hostile of media outlets (which according to Netanyahu include all Israeli journalists and television networks not unconditionally supportive of him), will be forced to cover the unusual event. Which other candidate running for the premiership on April 9 will have his photo taken with four European leaders against the backdrop of Judaism’s holiest site, the Western Wall? How many of those running can organize such an Israel-supporting coalition of European Union states, so many of which are opposed to Israel’s occupation of the Palestinians and advocate human rights? So what if several of them are tainted by anti-Semitism and Holocaust denial? No stain can resist the bleaching effect of a wreath-laying ceremony at the Yad Vashem Holocaust Memorial in Jerusalem.

Yair Lapid, the chair of centrist Yesh Atid and a second-generation Holocaust survivor, was the only senior politician to speak out against the hosting of the summit in Israel. Polish Prime Minister Mateusz Morawiecki had pushed through legislation degrading to victims of the Holocaust, he said. When this law was first debated in Poland in 2016, Yehuda Bauer, the pre-eminent Holocaust historian who serves as an academic adviser to Yad Vashem, told Haaretz that the legislation bordered on Holocaust denial. Lapid also pointed to Hungarian Prime Minister Viktor Orban, who had engaged last year in a campaign bordering on anti-Semitism. “This is a loss of all national pride and international damage,” he tweeted Jan. 28. Lapid urged Netanyahu to curb his “lust” for campaign photo ops and forego hosting the summit. Nonetheless, let us not forget that Lapid himself was silent over reports of Israeli arms sales to despicable regimes accused of war crimes.

Retired Ambassador Colette Avital, the chair of the Israeli umbrella organization of Holocaust survivor groups, was less diplomatic. In an interview with Al-Monitor, she accused Netanyahu of providing a “seal of approval to leaders and regimes with neo-Nazi leanings, hurting Holocaust survivors and the memory of its victims.” The former Labor Party Knesset member added, “Motivated by narrow interests, the prime minister is helping those rewriting history — those who love Israel but hate the Jews.”

For Netanyahu, the paramount interest is to remain in power (and to avoid going to jail). In his view, Israel’s broader interests lie in tougher sanctions on Iran over its nuclear program and in removing its presence from Israel’s borders. Next in line is blocking international pressure on Israel to stop the creeping annexation of the West Bank and end the Israeli occupation there. Netanyahu, like his predecessors, also attaches great importance to selling arms to the highest bidder, including to dark regimes. Respect for the principles of liberal democracy, human rights and universal morality have no place in the Netanyahu school of government.

As Netanyahu sees it, a close relationship with the Visegrad Group serves Israeli interests well. So do the burgeoning ties with Persian Gulf leaders, Chad, South Sudan, China, Brazil, India and, of course, US President Donald Trump, the only leader who can take on Netanyahu in a mudslinging contest against the guardians of democracy. As Netanyahu himself said at the July 2017 Visegrad Summit in Budapest, “The European Union is the only association of countries in the world that conditions relations with Israel, which produces technology in every area, on political conditions.”

He is quite right. Netanyahu’s worldview and the array of interests guiding his policies place him far closer to Orban than to German Chancellor Angela Merkel. They even have a mutual, make-believe enemy: Jewish American philanthropist George Soros, who is of Hungarian origin.

According to a Jan. 20 Buzzfeed exposé, Netanyahu was the one who hooked up Orban with his legendary American campaign advisers, Arthur Finkelstein and George Birnbaum. The two masterminded the campaign that led Hungary’s right-wing party to victory. The unwritten deal between Netanyahu and the leaders of Central Europe is best described by what Netanyahu said about his policy on the Palestinians — “If they give, they will receive; if they don’t give, they will not receive.” The Visegrad Europeans give Netanyahu a photo op alongside international leaders as though his country were not an occupying power. In return, he gives them one at Yad Vashem as though there were no anti-Semitism problem in their countries.

Like every VIP visitor to Israel, the Visegrad Four will lay wreaths at Yad Vashem. So did the tyrant from Chad, Idriss Déby (2018), and President of the Philippines Rodrigo Duterte (2018). Duterte had declared in 2016, “Hitler massacred three million Jews … there’s three million drug addicts. There are. I’d be happy to slaughter them.” Other Yad Vashem visitors include Kenyan President Uhuru Kenyatta (2016) and Myanmar military head Min Aung Hlaing (2015), who launched a genocide and ethnic cleansing shortly after visiting the memorial.

Austrian Chancellor Sebastian Kurz took the trouble of bringing with him on his June 2018 visit a list of his country’s lost Jewish communities. The guide who showed him around could not resist mentioning some of the sites of recent anti-Semitic events inspired by the Austrian Freedom Party, a member of the country’s coalition government. Austria complained and Yad Vashem apologized.

Speaking to the New York Times, Bauer the historian explained that the Foreign Ministry determines the guest list and the memorial's policies but justified the invitation extended to every foreign leader, “even if it’s people we wouldn’t invite to dinner.”

However, Shalmi Barmor, former head of the Yad Vashem education department, protests what he describes as multiple “carnival productions of Jewish identity.” Speaking with Al-Monitor, he voiced harsh criticism of the apologetic attitude toward modern anti-Semitism, which views Jews as “a parasitic bacteria that has infiltrated the body of the nation and is destroying it from within.”

Barmor said, “The particular lesson of the Shoah, ‘never again,’ meaning a strong Jewish state that will defend the Jews and prevent another Holocaust, is undoubtedly a worthy, legitimate goal.” Nonetheless, he bemoans that the Israeli school system scarcely addresses the broader, universal aspects of the Holocaust lessons. The reason, he said, is that Israel itself is not immune to such conduct as persecuting African asylum seekers, turning the occupied territories into mass ghettoes and whitewashing anti-Semites and tyrants from all corners of the world.

by Murielle KASPRZAK and Joseph SCHMID | AFP | May 26, 2022
END_OF_DOCUMENT_TOKEN_TO_BE_REPLACED