Netanyahu uses 'divide and conquer' strategy to preserve his rule 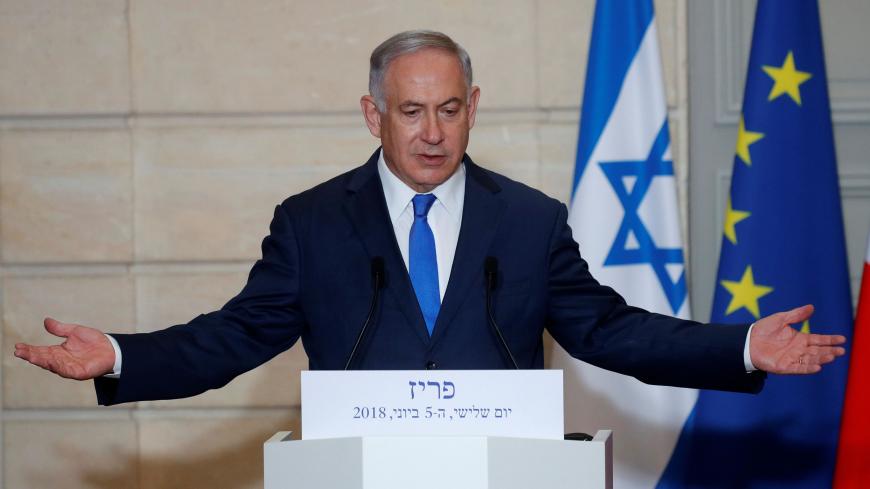 The Knesset's House Committee and Law, Constitution and Justice Committee met July 10 for a joint session about the nationality bill promoted by the ruling coalition. Prime Minister Benjamin Netanyahu hopes to present the bill for a Knesset plenum vote in the coming days, before the Knesset ends its summer session on July 22.

In an unusual move, President Reuven Rivlin berated the Knesset members debating the government’s controversial law proposal. “In the name of the Zionist vision, are we willing to lend a hand to the discrimination and exclusion of a man or a woman on the basis of his or her origin?” Rivlin wrote. The president referred to Article 7(b) of the proposed bill, which states, “The state may allow the community, including members of one religion or of one nationality, to maintain separate communal settlement.” According to Rivlin, this language allows any community, without limitations, to exclude all ultra-Orthodox Jews, for example, or Israelis originating from Arab states, or Israeli Druze or members of the LGBT community. The country’s top civilian reminded the lawmakers of their ultimate responsibility for preserving the delicate balance between the Jewish and democratic underpinnings of the state.

The president noted that his unusual appeal follows a conversation with Netanyahu. As of the writing of these lines, there is no significant indication that Rivlin managed to sway Netanyahu’s ardent support for the legislation, which enshrines Israel’s status as the nation-state of the Jewish people. After all, how can one expect a politician who has turned discrimination into an art form to be alarmed by a discriminatory law?

Netanyahu has based his career on the principle of divide and conquer. He owes his current, fourth term in large and perhaps decisive measure to a video message he issued on Election Day in 2015 warning, “The right-wing government is in danger. Arab voters are coming out in droves to the polls. Left-wing organizations are busing them out.” He relentlessly builds ever higher walls between Jews and Arabs, left-wing and right-wing adherents, and even manages to alienate the non-Orthodox Jewish communities overseas. Under Netanyahu’s leadership, the government has generated a storm of legislation designed to persecute civilians and organizations seeking to ease the burden of tens of thousands of Palestinians who have the misfortune to reside in Area C of the West Bank under Israeli control. Netanyahu will be remembered as someone who turned human rights activists and peace organizations seeking a modicum of justice for a defenseless (Palestinian) population into “Israel haters” and “collaborators with the enemy.” In the Netanyahu era, the European Union is also the enemy. This is probably the organization to which Attorney General Avichai Mandelblit referred when he warned Netanyahu of the implications the nationality bill for Israel’s international standing.

In the US arena, Israel faces a friendly president who does not lose any sleep over trampling the rights of the weak, including babies. Anyone espousing the “America first” orthodoxy should have no trouble identifying with legislation designed to ensure the principle of “Jewish people first.” An American-European front that harassed Israel for years with condemnation of human rights violations in the occupied territories and rebuked construction in the settlements has evaporated for now. Netanyahu's successful campaign against the nuclear agreement with Iran and in favor of the US Embassy's relocation to Jerusalem contributed its share to the division between the United States, which decided to withdraw from the Iran deal, and the European Union, which adhered to the agreement and opposed the change to the status quo in Jerusalem. The enthusiastic American support for Netanyahu’s positions and his success in sowing discord between world powers have contributed to his ability to rule despite the slew of criminal investigations he is facing.

Leaders who consider such values as equality, morality and human rights a nuisance have no trouble finding allies among EU members, either. Here, too, Netanyahu displays a masterful ability to divide and conquer. At a July 2017 meeting in Budapest with the central European leaders of Hungary, the Czech Republic, Poland and Slovakia — known as the Visegrad group — Netanyahu complained against Europe, meaning Western Europe. He accused it of conditioning ties with Israel on political demands for an end to the occupation of Palestinian lands, to violation of Palestinian rights and persecution of organizations that help them. In Netanyahu, Hungarian Prime Minister Viktor Orban found a kindred spirit. “The European Union dictates conditions to those already in the European Union, not just to states that are not,” he said. The nationalist leader was probably referring to the EU’s pressure on central European states to respect democracy and display a humane attitude toward refugees.

When he visits Israel July 18 as Netanyahu’s guest, Orban will feel at home. He will have an opportunity to learn up close that in the Jewish state, too, there are those who hate foreigners, promote laws limiting freedom of expression and incite against the judiciary. The guest will be able to exchange views with Netanyahu about the campaign both are waging against Hungarian-born Jewish American billionaire George Soros, who supports human rights organizations in both countries.

The Hungarian Jewish community’s displeasure with Orban’s campaign, which gave off a strong whiff of anti-Semitism, is negligible, as far as Netanyahu is concerned, compared to the possibility of driving a wedge into the heart of the European Union. In order to enjoy the favors of the right-wing Polish government, Netanyahu gave the Polish people a stamp of approval at the end of last month. The joint statement largely exonerated the Poles from any role in the annihilation of six million Jews. So what if Yehuda Bauer, one of the leading Holocaust scholars in the world and the academic adviser of the Yad Vashem Holocaust Memorial, called the joint statement with Poland a betrayal of the memory of the Holocaust? The Jews who were burned to death by Polish anti-Semites cannot vote in the EU’s institutions. They cannot thwart sanctions against Israel that require the agreement of all 28 EU member states.

If political success is measured by survival and diplomatic success by the status quo, Netanyahu is worthy of being crowned world champion in divide-and-conquer maneuvers. However, if, as Rivlin said, the greatest challenge of a Zionist leader is maintaining the delicate balance between democratic values and the state’s Jewish character, Netanyahu and his partners on the radical right should all be shamed. Not only are they writing yet another grim chapter in the annals of the Israeli people, they are joining hands with other nations that also disregard the universal values adopted by the international community after the catastrophes of the 20th century.