As long as European anti-Semites serve his goal of blocking sanctions against Israel, Prime Minister Benjamin Netanyahu seems to have no problem with them. 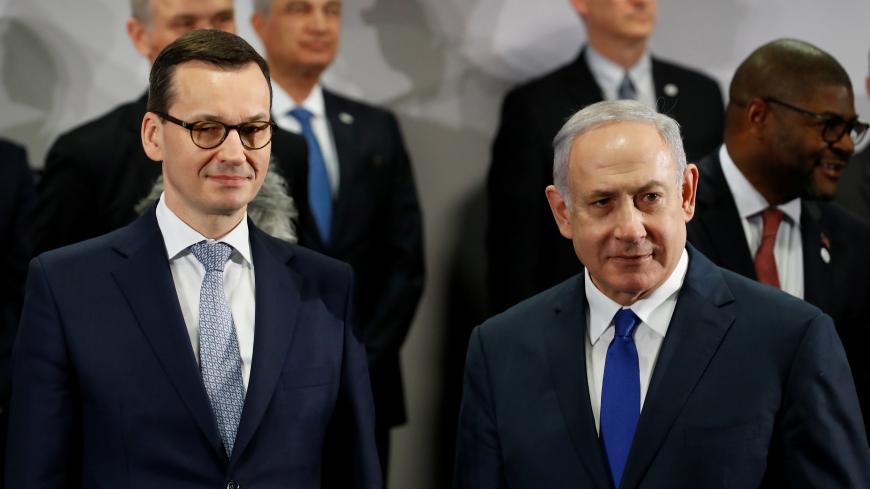 “All countries need alliances; superpowers need alliances,” said Prime Minister Benjamin Netanyahu at a May 14 event marking the first anniversary of the US Embassy's move from Tel Aviv to Jerusalem. “Obviously a small country — small in territory, giant in spirit — a country like Israel needs alliances, too.” The prime minister then went on to list Israel’s inventory of allies, leading with the United States and President Donald Trump, “Israel’s best ever friend in the White House.” Netanyahu’s list also included the Arab world, Asia, Africa and Latin America.

The “greatness of spirit” of little Israel, an occupying power, is obviously the basis for the alliance with the Egyptian champion of human rights, President Abdel Fattah al-Sisi, and with Philippine President Rodrigo Duterte, for whom Adolf Hitler was a source of inspiration. Chad’s President Idriss Deby and Brazilian President Jair Bolsonaro, both well-known democrats, have also visited Jerusalem in recent months.

And why did Europe disappear from Netanyahu’s list? In 2017, Netanyahu famously labeled the European Union’s attitude toward Israel as “crazy,” but what about his central European allies? Why was Hungarian Prime Minister Viktor Orban not mentioned? After all, Hungary seems to be closely aligned with Israel in terms of xenophobia, a sentiment shared by the government in Budapest and Netanyahu’s own son Yair. How could Netanyahu have forgotten Mateusz Morawiecki, whose blind support for Israel’s occupation of Palestinian territories won Poland a pardon for its crimes against the Jewish people? It's hard to believe Netanyahu's memory has betrayed him to such an extent.

The answer lies in these allies’ failure to deliver the goods. Netanyahu has ignored and even cooperated with their anti-Semitic deviations, serving as their advocate at the White House and in Congress, while they refuse to move their embassies to Jerusalem. Much to Netanyahu’s chagrin, at the last minute the so-called Visegrad States (Poland, Hungary, the Czech Republic and Slovakia) canceled their annual summit scheduled to take place in Jerusalem this past February.

“The anti-Semites will never change,” Netanyahu declared at the commemoration event. As long as European anti-Semites serve his goal of blocking EU sanctions against Israel, the prime minister will not change his attitude toward them. He did not utter a word of protest when Morawiecki, speaking at a May 11 election rally, reiterated his government’s position that Poland was a victim of the Nazi occupation in World War II and therefore “We will not allow any damages to be paid to anyone because it is us who should get damages.” This declaration was preceded by a Foreign Ministry statement in Warsaw saying Poland had decided to cancel the planned visit of an Israeli delegation this week “after the Israeli side made last minute changes in the composition of the delegation suggesting that the talks would primarily focus on the issues related to property restitution.” Indeed, the delegation was supposed to discuss Polish compensation for properties confiscated from Jews by the Nazi regime and later expropriated by the Soviet-allied Communist regime that ruled Poland after the war. Most of the restitution claims were rejected. When Poland became a democracy in 1989, a significant number of the assets were restored to their Jewish heirs, but Poland is the only EU state that did not adopt sweeping legislation to regulate the restoration of looted or nationalized properties or to compensate for them.

In a May 12 statement announcing the delegation’s visit, Social Equality Minister Gila Gamliel said Israel’s government views the restitution of Jewish property and promotion of the rights of Holocaust survivors as “a binding moral imperative of the Jewish state.” The senior member of Netanyahu’s Likud added that no one “will stop us from carrying out this important imperative.” However, the next day, a “diplomatic” source placed the blame for the crisis at Gamliel’s door. The source, quoted in the nationalist Netanyahu family mouthpiece Israel Hayom, claimed there had been “a quiet understanding with the Poles” that the issue of restitution would be discussed by the Israeli delegation, “and there was no need to make it public.” The source accused Gamliel and her ministry of making a bad mistake by announcing the delegation’s plan to raise the issue in Warsaw.

This leniency toward Poland and its like was also reflected in a joint communique that Netanyahu and Morawiecki issued last July after Poland's lower house revised the language of a law criminalizing references to Polish guilt in Nazi atrocities. Even the Yad Vashem Holocaust Memorial in Jerusalem, which welcomes all of Netanyahu’s dubious guests, could not ignore the statement, describing it as “an offense not only to the historical truth, but also to the memory of the heroism of the Righteous Among the Nations.” Education Minister Naftali Bennett called the statement “a disgrace and a blow to the memory of those who perished in the Holocaust.”

Former Knesset member Colette Avital, chair of an umbrella organization of Holocaust survivors, told Al-Monitor this week that the cancelation of the Israeli delegation’s visit to Poland underscores once again the Israeli government’s obligation to choose between a moral stand upholding the rights of Holocaust victims and realpolitik.

Netanyahu has made his choice, embracing a Machiavellian approach toward morality and politics as a symbol of Israeli diplomacy. So have the masses of Israelis who crowned him five successive times, and may well do so again.