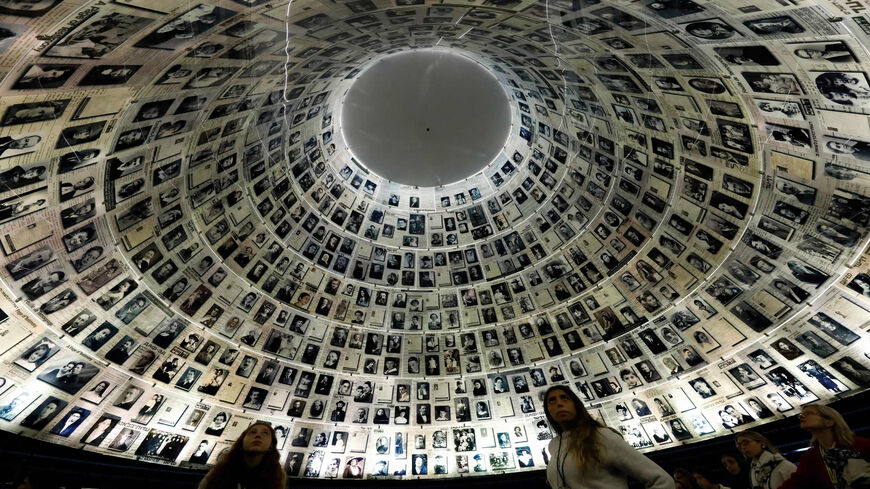 Visitors look at the Hall of Names, a repository for the names of millions of Holocaust victims at the Yad Vashem memorial center, Jerusalem, Jan. 20, 2020. - Emmanuel Dunand/AFP via Getty Images

The diplomatic war between Jerusalem and Warsaw has been escalating in the past week, with new developments unfolding almost on a daily basis. The reason for this recent open war is the approval, first by the Polish parliament and then by Polish President Andrzej Duda, of a bill limiting the ability of Jews to recover property seized by Nazis in Poland during World War II.

The last bitter exchange between the two countries came Aug. 15. Polish Prime Minister Mateusz Morawiecki rejected accusations by Jerusalem that the new legislation was in fact antisemitic. He also expressed anger over the decision by Foreign Minister Yair Lapid to call back Israel’s top diplomat in Warsaw and to avoid sending to Warsaw the newly appointed ambassador. “Israel’s decision to lower the rank of the diplomatic representation in Warsaw is groundless and irresponsible. … If the Israeli government continues to attack Poland in this way, it will also have a very negative impact on our relations, both bilateral and international forums,” said Morawiecki.

Lapid responded to Morawiecki in a Twitter post of his own, saying, "Gone are the days when Poles harmed Jews without consequence. Today, Jews have a proud and strong country of their own. We do not fear antisemitic threats, and have no intention of turning a blind eye to the shameful conduct of the anti-democratic Polish government."

Tensions between Israel and Poland started some two years ago, escalating last June when the Polish Lower House  voted in favor of the bill. The bill was then approved by the Polish Senate (the Upper House) with two amendments, which required a second vote by the Lower House. At that point, Knesset Speaker Mickey Levy announced he will not establish an Israel-Poland parliamentary friendship group. This did not deter Warsaw. The revised bill passed again Aug. 11, pending the final approval of the Polish president, accorded three days later.

Jerusalem was hoping until last week that Duda would refrain from signing the controversial bill, thus preventing its enactment. After Duda’s signature, Lapid tweeted, “Poland, not for the first time, passed an antisemitic and immoral law. Tonight, I instructed the head of the embassy in Warsaw [Charge d'Affaires Tal Ben-Ari Yaalon] to return immediately to Israel for indefinite consultations. The new ambassador to Poland [Yaakov Livne], who was due to leave for Warsaw soon, will not leave for Poland at this stage.”

Lapid added that the Foreign Ministry in Jerusalem will recommend the Polish ambassador to prolong his vacation abroad, and not come back to Israel at this stage. “Today, Poland turned into an anti-democratic, illiberal country that doesn’t respect the greatest tragedy in human history. We must never remain silent. Israel and the Jewish people definitely will not be silent,” Lapid concluded.

Prime Minister Naftali Bennett said, “Israel views the approval of the law that prevents Jews from receiving compensation for property stolen from them during the Holocaust gravely, and regrets the fact that Poland chooses to continue to harm those who have lost everything.”

Defense Minister Benny Gantz said, "As the son of Holocaust survivors, I am deeply disturbed by the law passed in Poland that effectively prevents justice from the victims of the Holocaust and their families. Property restitution is a small yet significant part of the process to fulfill the rights of those who have survived and to acknowledge those who have perished in one of the world’s biggest genocides. I call on my international partners to condemn this move in one voice."

In fact, already after the Aug. 11 decision of the Polish parliament, Lapid tweeted an especially sharp response, saying, "The State of Israel will not compromise on any comma in the memory of the Holocaust. I condemn the legislation of the Polish parliament that was passed today, which harms the memory of the Holocaust and the rights of its victims.’’

On that same occasion, Lapid also made reference to Polish attempts in 2018 of passing another Holocaust-related legislation, which would have criminalized those blaming Poles for World War II crimes. International pressure had forced the Polish leadership to curb that bill. Following the public outcry in Israel and other countries, then-Israeli Prime Minister Benjamin Netanyahu and his Polish counterpart Morawiecki published a joint declaration, hailing 30 years of bilateral cooperation and welcoming "the decision taken by the Polish government to establish the official Polish group dedicated to the dialogue with its Israeli partners on historical issues relating to the Holocaust."

Several politicians, activists and Holocaust survivors had criticized Netanyahu’s joint statement, arguing that by doing so he assisted the Poles in their efforts to rewrite history. In his Aug. 11 post, Lapid reminded Israelis that in 2018, he objected to the joint statement, noting that Jerusalem is currently reexamining that document. "I will continue opposing any attempt to rewrite history, and to promote compromises and concessions at the expense of the Holocaust of the Jewish people and the rights of Holocaust victims. Poland knows what is the right thing to do, which is repealing the law," Lapid said.

But Lapid did not stop there. On Aug. 12, he tweeted another sharp post, this time revealing that Jerusalem and Washington were coordinating their reactions to the new Polish legislation on restitution. "Intensive discussions are currently taking place with the US administration on ways to respond to the Polish legislation [on restitution], which borders on Holocaust denial. We won’t let it pass tacitly. The Poles cannot continue harming the memory of those who perished," Lapid said.

Lapid then retweeted the statement published Aug. 11 by the State Department, which said that the US is "deeply concerned that Poland’s parliament passed legislation today severely restricting the process for Holocaust survivors and their families, as well as other Jewish and non-Jewish property owners, to obtain restitution for property wrongfully confiscated during Poland’s communist era. We urge that President Duda not sign the bill into law or that, in line with the authority granted to him as President, he refer the bill to Poland’s constitutional tribunal."