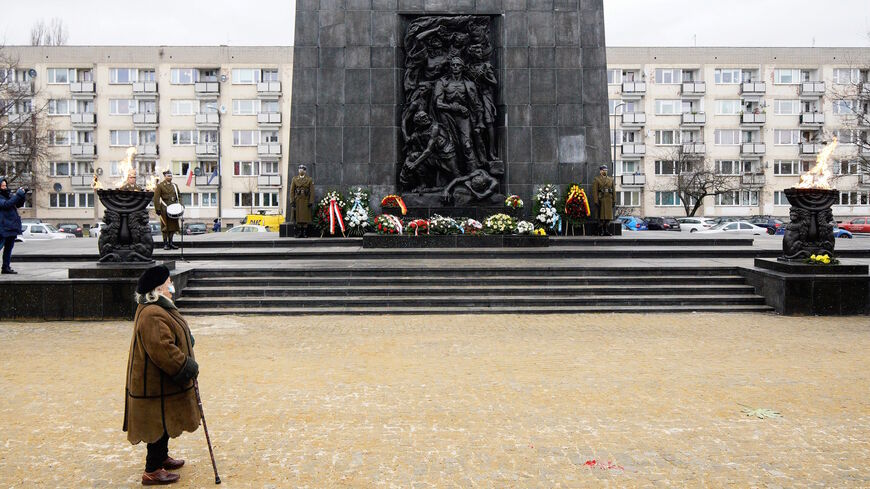 A woman attends a ceremony to commemorate victims of the Holocaust at the Ghetto Heroes Monument in Warsaw, Poland, on Jan. 27, 2021. - Xinhua/Jaap Arriens via Getty Images

Israel’s Foreign Ministry summoned yesterday Polish Ambassador Marek Magierowski to express its disapproval over a law approved recently by the parliament in Warsaw for limiting restitution rights of Jewish victims of the Holocaust. A statement issued by the ministry yesterday said the director of the political department, Alon Bar, “expressed the State of Israel’s severe disappointment [at the legislation], which is expected to adversely affect, according to experts, 90% of property restitution requests from Holocaust survivors and their descendants.” In a counter demarche, the Polish Foreign Ministry invited Israel’s charge d’affaires, Tal Ben-Ari Yaalon, for a similar reprimand this afternoon.

An already existing rift between Jerusalem and Warsaw over Polish restitution widened over the past few days. On June 24, shortly after the discussion over the law in the Polish parliament, Israeli Foreign Minister Yair Lapid issued an especially harsh statement. “Poland's draft law will in effect prevent the restitution of Jewish property, or the provision of compensation, to Holocaust survivors and their heirs. It is a horrific injustice and disgrace that harms the rights of Holocaust survivors, their heirs and members of the Jewish communities that existed in Poland for hundreds of years. This is an incomprehensible action. This immoral law will seriously harm relations between the countries. We view with gravity the attempt to prevent the restitution of the property that was stolen by the Nazis [and their helpers] in European states during the Holocaust to their legal owners. No law will change history. It is a disgrace that will not erase the horrors or the memory of the Holocaust,’’ read the statement, adding that “Poland, on whose soil millions of Jews were murdered, knows what is the right thing to do.”

The Polish reaction came quickly. Polish Deputy Foreign Minister Pawel Jablonski told local press, “We believe that unfortunately what we’re dealing with here is a situation that certain Israeli politicians are exploiting for internal political purposes.” Polish Prime Minister Mateusz Morawiecki said on June 25, “I can only say that as long as I am the prime minister, Poland will not pay for German crimes: Neither zloty, nor euro nor dollar.”

Hitting back, Lapid tweeted yesterday, “The prime minister of Poland should check the facts again. Millions of Jews were killed on Polish soil, and no legislation will erase their memory. We’re not interested in Polish money and hinting at such is antisemitic. We are fighting for the memory of the Holocaust victims, for the pride of our people, and we won’t allow any parliament to pass laws whose goal is to deny the Holocaust.” At the abovementioned meeting in the Foreign Ministry in Jerusalem, Bar reiterated Lapid’s comments, noting the law is expected to adversely affect Israeli-Polish relations and it was not too late for Poland to halt these measures.

The current dispute can be traced to 2018 when Poland advanced legislation seeking to punish those who accused Poles of being complicit in the mass extermination of Jews during World War II. Passed by the lower house of parliament, that bill sought to criminalize any suggestion that Poland participated in crimes against humanity and punish by imprisonment anyone using terms like "Polish death camps" to describe the killing sites operated by the Nazis in occupied Poland.

The 2018 Polish bill stirred great anger in Israel. Yair Lapid, whose father, Tommy Lapid, was a Holocaust survivor, championed the Israeli campaign against the Polish legislation initiative, engaging with the Polish Embassy in Tel Aviv in a Twitter war. "I utterly condemn the new Polish law which tries to deny Polish complicity in the Holocaust. It was conceived in Germany but hundreds of thousands of Jews were murdered without ever meeting a German soldier. There were Polish death camps and no law can ever change that," he wrote at the time.

Then-Prime Minister Benjamin Netanyahu also reacted to this legislation initiative, expressing his strong opposition to it. “The Holocaust cannot be denied,” he wrote, adding he instructed the Israeli Embassy in Warsaw to “meet tonight with the Polish prime minister to relay my firm stance against this bill.” Still, in Israel’s public opinion, it was Lapid (then at the opposition), not Netanyahu, who was standing at the forefront of the campaign.

The Polish government eventually backtracked from this 2018 legislation initiative, but Israeli leaders kept hammering against what they considered Polish official attempts to rewrite history and put in place a new narrative for the Holocaust. One that would remove from them any responsibility for the killing of Jews. Participating at an international conference on February 2019, Prime Minister Benjamin Netanyahu was quoted as blaming the Polish nation for collaborating with the Nazis. Netanyahu later clarified he was talking about some Poles who collaborated. The brief crisis was put to rest, but only on the surface, as the exchanges of statements these past few days indicate.

Lapid, of Hungarian origin, has already demonstrated that his battle against the changing Polish narrative on World War II is not just an episode, but an issue he would keep pursuing in coming years. In parallel, as foreign minister, Lapid is expected to keep addressing nationalist positions of Hungary’s Victor Orban. Already in 2019, a spokesperson of Lapid noted that if elected prime minister, he would demand Orban apologize for an “anti-Semitic campaign” run by his government.