A Polish bill threatens to whitewash Poland's participation in massacring Jews during the Holocaust. 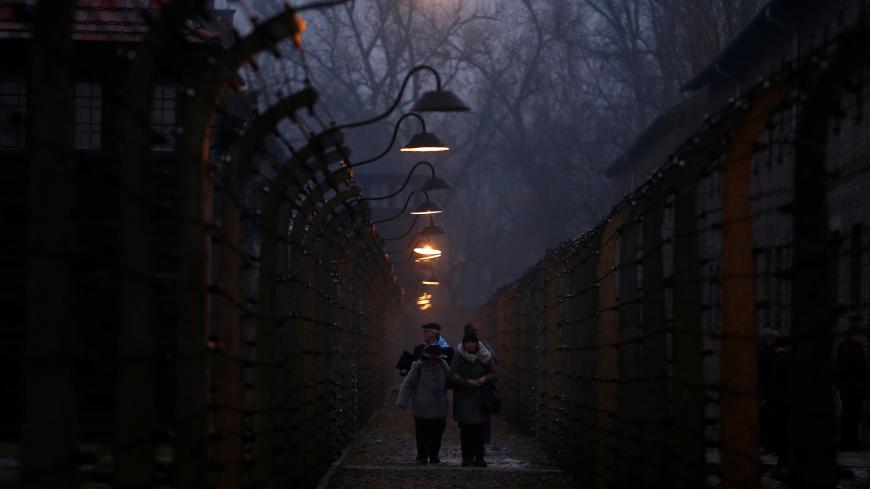 Survivors and guests walk inside the barbed wire fences at the former Nazi concentration and extermination camp Auschwitz, during the ceremonies marking the 73rd anniversary of the liberation of the camp and International Holocaust Victims Remembrance Day, in Oswiecim, Poland, Jan. 27, 2018. - REUTERS/Kacper Pempel

Seven decades later, it seems that the only issue capable of uniting the quarrelsome Israelite tribe into a consensus is the Holocaust. On Jan. 26, the Polish parliament passed a law that forbids mentioning the part of the Polish people in the destruction of its Jews, and it set a three-year prison term for anyone using the term “Polish death camp.” The news infuriated all Israelis across the political spectrum, making the splintered Israeli state one combative entity.

Education Minister Naftali Bennett instructed his staff to immediately prepare a lesson plan for mandatory classes to be taught in schools this week regarding the Polish involvement in the Holocaust. “It is a historical fact that many Poles collaborated in the murder of the Jews. They informed on them, turned them over and even committed murder with their own hands,” Bennett explained. Yesh Atid leader Yair Lapid, the son of Holocaust survivor Yosef Lapid, tweeted that “no Polish law can change history. Poland collaborated in the Holocaust. Hundreds of thousands of Jews were murdered on Polish land without encountering one German officer.”

Prime Minister Benjamin Netanyahu took a bit more time to react. On Saturday night, several hours after the Polish law was passed, he made his objection and condemnation. Netanyahu’s statement was much less furious and more politically correct that most of the others.

Even Arab Knesset members Ahmad Tibi and Ayman Odeh agreed. Tibi said, “The Polish law has no place: It is an unfortunate, shameless law that opens a window to Holocaust deniers. Numerous Poles took part in the destruction and murder of Jews, and too many others kept silent. Anyone looking toward the future, must [first] learn from the past,” adding, “This legislation does not set us free,” a play on words of the sign "Arbeit macht frei" (“Work sets you free”), which greeted the unfortunate victims led to the Auschwitz-Birkenau extermination camp. This camp on Polish territory became the largest cemetery of murdered Jews in the entire history of the Jewish people.

When the winds of fury die down, Israel will reveal that it has shot itself in the foot over recent years. Poland’s right-wing government enjoys close relations with the Israeli government, and Poland is considered one of Eastern Europe’s most pro-Israeli countries. It usually votes with Israel in the UN. Israel, for its part, has been turning a blind eye to the xenophobic and far-right elements that have been rising to power in European countries to maintain vital diplomatic support. Now this policy is backfiring against the decision-makers in Jerusalem.

The Israeli and Polish governments released a joint statement in 2016 that included a section in which both states firmly stated their opposition to attempts at “distorting the history of the Jewish or Polish peoples by denying or diminishing the victimhood of the Jews during the Holocaust, or using the erroneous terms of memory such as ‘Polish death camps.’” The difference, they say in Jerusalem, is that the current Polish law criminalizes anyone who connects Poland or the Poles to the Holocaust, and that’s a horse of a different color. The intensity of the Israeli response aroused concern even in Poland. Netanyahu and Polish President Andrzej Duda talked on the phone on Sunday and decided to open a dialogue regarding the law. The formulation of the law is not yet final and still needs to be authorized by the president.

The storm in Israel had not abated three days after the law was publicized. On the eve of World War II, about 3.5 million Jews lived in Poland. Ninety percent of them were murdered. True, the death camps were built by Germany and operated by Germans or their collaborators, but hundreds of thousands of Polish Jews were murdered by the country’s residents or were turned over to the Nazis by Poles. For example, about 1,600 Jews were murdered by their Polish neighbors in the village of Jedwabne in a particularly horrific pogrom.

Polish-American historian Jan Tomasz Gross published his historical investigation "Neighbors" in 2001, compiling proof that it was the Poles, not the Germans, who were responsible for this atrocity. Many such events took place in Poland in the course of the war, and stories of Polish brutality became engraved in the Israeli consciousness through the tens of thousands of Holocaust survivors who testified about what happened and passed on their stories to their children and grandchildren.

The atrocities did not end with the war. At the end of 1945, the Poles in Krakow conducted a pogrom against the remnants of the Jewish community who had survived the war. Another, better-known pogrom took place in Kielce in July of 1946, and dozens of Jews were murdered after a blood libel spread throughout the city. The two massacres were the final rude awakening of the Jewish survivors in Poland. In the following years, about 150,000 of them moved to Palestine, which later became the State of Israel.

Today, Israelis are recalling the hair-raising stories of the Polish Holocaust survivors and thinking, dumbfounded: How dare the Poles attempt to distort or forget their actions in the Holocaust period? How dare they wash their hands of responsibility? Not only do they not express regret, but they are now trying to “educate” their victims after the fact!

By contrast, Israelis point to the impressive German memorialization enterprise, which includes expressions of remorse by the German public as well as German Chancellor Angela Merkel’s efforts to assume responsibility for the Holocaust and to condemn anti-Semitism and those who try to whitewash it. The attitude toward the Holocaust is also fundamentally different in Italy and France from that in Poland. For example, in a 2016 Holocaust memorial ceremony conducted with UNESCO, a French military choir sang one of the most spine-tingling of the Yiddish songs that characterized European Jewry during the Holocaust: “Never say the final journey is at hand.”

In their bizarre efforts to whitewash their past 72 years after the tragedy inflicted on the Jewish people on Polish land, the Poles were unprepared for the intensity of emotions that their proposed law aroused in Israel. Let us remember that in 2003, Israel sent three F-15 fighter jets from its air force to carry out a ceremonial flight over the Auschwitz-Birkenau site where more than 1 million Jews had been murdered during the Holocaust. (One jet was purposely missing from the formation, to symbolize the missing murdered Jews.) The flyover was led by Amir Eshel, who later became the commanding officer of the air force. Today, a photograph of the Israeli jets flying over the death camp hangs in the chambers of all Israel Defense Forces officers and generals, Mossad and Shin Bet heads and even many of the decision-makers in Jerusalem. The caption underneath the picture reads, “The Israel Air Force over Auschwitz on behalf of the State of Israel and the Jewish people. To remember, not to forget, to rely only on ourselves.”

Israel has now encountered efforts to cause people to forget. Such efforts will find no success in Israel and among the Jews. But the question is: How far will the Poles take this legal initiative? Or will they come to understand that they have hit the most sensitive nerve of the Israeli soul?