Straight talk from Israel's Lapid includes criticism of US

Foreign Minister Yair Lapid does not stop for a minute, including controversial remarks on Poland, on the US Consulate in Jerusalem and on Afghanistan. 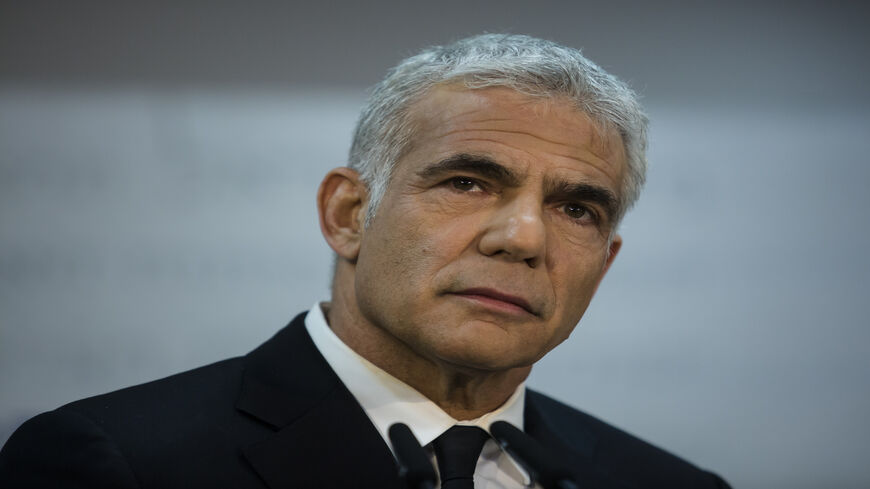 At a briefing for foreign correspondents Sept. 1, Israel’s Foreign Minister Yair Lapid surprised everyone with his outspoken criticism of the US withdrawal from Afghanistan. It was just over a day after the last American soldier left that country. US President Joe Biden was still facing mounting public criticism of the withdrawal. To many it seemed as if the Americans were leaving Afghanistan with their tail between their legs.

“I think the entire globe was concerned, and first and foremost the Americans themselves [about the way the withdrawal played out]. It didn’t happen the way it was supposed to happen. … It was probably the right decision that maybe wasn’t performed in the right manner,” Lapid told the group of journalists.

It was painful to hear, particularly since Prime Minister Naftali Bennett had just gotten back from a visit to the White House, where he received an especially warm welcome. Biden made sure to spend time with Bennett, even though the crisis in Afghanistan was nearing its climax.

Lapid holds the title of alternate prime minister, and he will be replacing Bennett in less than two years, i.e., any comments he makes have high visibility. This raises the question: What political value could such a critical assessment of Israel’s closest friend and ally have, especially when that friend is facing a crisis?

This was not the only headline involving the United States, which Lapid delivered at that briefing. He also spoke about the Biden administration’s initiative to reopen the US Consulate in East Jerusalem, after it was shut down by the Trump administration. “We think it’s a bad idea and we’ve told America we think it’s a bad idea,” Lapid updated the foreign press. “The consulate has been there for 130 years and reopening it after it was closed sends the wrong message." Lapid added that such a move could destabilize the already fragile government.

While the United States did not respond publicly to these remarks, one senior Israeli diplomat told Al-Monitor on condition of anonymity, “The Americans definitely did not appreciate this criticism. I myself don’t understand what benefit it had, especially since it involved a friendly government. No one is making a big deal of it now, but the Americans remember everything.”

On Sept. 6, Lapid spoke on the phone with US Secretary of State Antony Blinken, in what seemed an attempt to pull back on the criticism he expressed earlier over the Afghanistan withdrawal. A statement issued by Lapid’s office said, “The minister expressed his deep appreciation for the US effort in Afghanistan, especially with regard to the extraordinary evacuation operation.”

Since he entered the Foreign Ministry less than three months ago, Lapid has proved himself to be an especially vigorous minister. He wants to create his own agenda, which combines his liberal, progressive worldview with Israeli nationalism and patriotism. The problem is that he does not always use the most diplomatic language, and that this may indicate a lack of experience.

The most obvious example of this is the serious crisis in relations between Israel and Poland. In the Netanyahu era, Poland was considered one of Israel’s closest friends and an important ally in international organizations and institutions.

The background for the current crisis was the Polish parliament’s approval of a law that would make it more difficult for survivors of the Holocaust to sue for compensation for property they owned before World War II, which was confiscated by the Nazis. On Aug. 14, Polish President Andrzej Duda signed the act into law, despite protests by Israel and the United States.

Lapid’s response was surprising in its intensity. He instructed the diplomat in charge of the Israeli Embassy in Warsaw, Tal Ben-Ari Yaalon, to return to Jerusalem at once for consultations. The new ambassador to Poland, Yaakov Livne, who was due to leave for Warsaw, was instructed to stay put in Israel for the time being. Lapid’s comments were unusually blunt, too. He said, “Poland, not for the first time, passed an antisemitic and immoral law.”

Lapid continued that the Foreign Ministry in Jerusalem will recommend the Polish ambassador to prolong his vacation abroad, and not come back to Israel at this stage. “Today, Poland turned into an anti-democratic, illiberal country that doesn’t respect the greatest tragedy in human history. We must never remain silent. Israel and the Jewish people definitely will not be silent,” Lapid concluded.

But the Poles refused to fold. Polish Prime Minister Mateusz Morawiecki responded with an attack of his own, accusing the Israeli foreign minister of acting irresponsibly for pure party interests. “If the Israeli government continues to attack Poland in this way, it will also have a very negative impact on our relations, both bilateral and international forums,” said Morawiecki.

Almost no one in Israel contests the fact that Lapid’s protest was justified both morally and nationally. Many Israeli citizens identified with it. The question is whether it was diplomatically astute to act that way. For instance, as Israel’s former deputy ambassador to Poland, Ami Mahel believes that Lapid made a mistake. He claimed, “The role of diplomacy is to engage in dialogue, build bridges and resolve problems.”

So far, the crisis between Israel and Poland continues to percolate, with no resolution on the horizon. Poland has already signaled that it has no plans to back down.

Then there is Lapid’s strange alleged involvement in a squabble between Morocco and Algeria. On Aug. 24, Algeria announced that it was severing diplomatic relations with Morocco in response to Morocco’s “hostile activity.” In a press conference announcing the decision, Algerian Foreign Minister Ramtane Lamamra cited among other things Lapid’s visit to Morocco as one reason for it. According to him, the Israeli foreign minister made anti-Algerian statements during a state visit to Morocco.

He was referring to remarks made by Lapid during the dedication of the new Israeli diplomatic offices in Rabat, as part of his historic visit to Morocco. Lapid said at the time that in talks with Moroccan Foreign Minister Nasser Bourita, he expressed his concerns about Algeria’s role in the region, especially with it becoming closer to Iran. Lamamra claimed that “Morocco has turned its territory into a platform allowing foreign powers to speak with hostility about Algeria. … Since 1948, no Israeli official made a hostile declaration to an Arab country from another Arab country.’’

Relations between Morocco and Algeria have been tense for decades because of a territorial dispute in the Western Sahara. Israel has nothing to do with that. But Algeria is also considered a pro-Iranian state, so Lapid’s remarks do align with Israel’s interests. Once again, the question is whether this was the appropriate forum to raise the issue.

Looking back on Lapid’s last few months in the Ministry of Foreign Affairs, it is quite evident that he is taking his job very seriously. He meets frequently with counterparts all around the world, and is fostering a good relationship with Blinken. In fact, Lapid takes great pride in the way he has been able to rehabilitate Israel’s relationship with the US Democratic Party.

On the other hand, at times, Lapid shows little diplomatic restraint, when it comes to criticizing American foreign policy even in a moment of crisis. As Lapid prepares to enter the prime minister’s office, he has proved himself to be an independent-minded foreign minister, confident in his abilities and interested in fostering a reputation as a stateman. Given his style until now though, it is worth considering whether he is really ready for the job.