Likud Official Calls for Referendum On Agreement With Palestinians

Likud Knesset member Ofir Akunis reaffirms to Mazal Mualem his party's willingness to promote a referendum bill on a future agreement with the Palestinians. 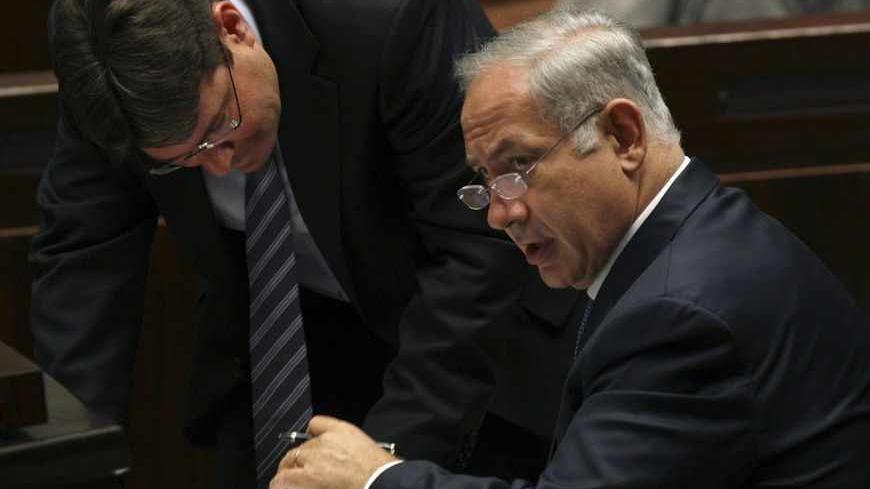 The Likud's Ofir Akunis, the deputy minister responsible for liaison between the government and the Knesset, does not anticipate that political fallout will take place if the diplomatic process with the Palestinians is renewed.

Akunis has spent long years in Prime Minister Benjamin Netanyahu’s immediate environment, first as his deputy media adviser and in recent years as one of the prime minister’s confidants among the Knesset members.

In an interview with Al-Monitor, Akunis reckons that Netanyahu’s third government will live far longer than the forecasts of the political commentators. For the ultra-Orthodox, who are waiting in the corner for the day that Netanyahu will invite them back to the government, that is not good news.

Would a renewal of diplomatic negotiations with the Palestinians threaten the government’s stability?

“If it were dependent on us, negotiations would have been renewed a long time ago. It is dependent on the other side, that consistently refuses to renew them. As far as we are concerned, nothing stands in the way. The government extends its hand to the Palestinians, it also appears in the government’s basic principles platform. Now, the ball is in their court.”

“No. As I said, it doesn’t depend on us nor on the Americans. The United States wants a renewed diplomatic process and so does Israel. I want to remind you that we already took far-reaching steps, such as a construction freeze in Judea and Samaria — something that totally contradicts the Likud’s fundamental world view — and the Palestinians still didn’t come. We also removed checkpoint barriers in the West Bank, that’s not something to be taken lightly, and especially in view of the increased popular terror coming from there. We know that Judea and Samaria is under total control of the Palestinian Authority; when they want, they feed the flames and when they don’t want, they lower them. I also want to emphasize that stone-throwing is an act of terror, with all the ramifications involved. There is a young child hospitalized in critical condition as the result of rock-throwing at the family car.” (Akunis refers to 4-year-old Adele Biton, who was injured in mid-March in a car accident, evidently caused by rock-throwing Palestinians.)

Maybe we are right, but not wise. Diplomatic stagnation isn’t good for us either, shouldn’t we be the ones to initiate things?

“It seems to me that we are displaying excellent initiative, from the very fact that we want to enter into negotiations. In effect, your question is, ‘Why don’t you give in to the Palestinians?’ I am against this approach that says, ‘Initiate!’ It’s a 'word-laundering' way for saying, make concessions in advance on your positions just so the Palestinians will enter into negotiations. That is the foundation of the leftist point of view — return to the 1967 lines, divide Jerusalem and allow the return of a half-million Palestinian refugees to Judea and Samaria, and some to Israeli territory. So why do we need negotiations if everything is known in advance? Negotiations should be a give-and-take process. To argue over things.”

Akunis adds: “Unfortunately, Palestinian chairperson Abu Mazen doesn’t come. I don’t know what motivates him not to come to negotiations. Why doesn’t he want to undergo the process? He took part in the diplomatic process with former governments, he also had talks with us. We don’t want the Palestinian Authority to fall apart, that’s not an Israeli interest, because what will be the alternative? The rise of Hamas? Or the world jihad?

“It’s also clear to us,” says Akunis, “that Abu Mazen, as the one who heads the authority, is definitely a partner.”

So it’s basically [playing the blame game], "It’s not us, it’s them …” You, in the Likud, have been saying this for many years …

“True, because that’s the reality. What can you do? We weren’t the ones to leave the talks, we were the ones who wanted to promote them. We even received reinforcement from President Obama on this during his visit. People didn’t really pay attention to it, but Obama said something very dramatic during a press conference with Abu Mazen in Ramallah on March 21: That this pattern, that negotiations can be renewed only after pre-conditions are met — is not acceptable.

“This statement is very important in my eyes, because it basically tells the other side that our demand to renew negotiations without preconditions — is justified.”

In any event, if the Palestinians will prove they are serious and the negotiations advance, what will transpire within the Likud itself and in the coalition with the HaBayit HaYehudi party?

“I don’t anticipate political fallout if negotiations are renewed. I don’t think that anyone in the coalition will say he wants to quit due to renewal of talks. That, alone, is not a cause for quitting the coalition.

“As opposed to all the commentators who assert that this government will collapse after a year and a half, I think that it will hang on a lot longer than people think. That is true even if diplomatic negotiations will reach advanced stages.

“If we reach the stage of summation, it seems that we will conduct a referendum. That is something that the prime minister supports, and it appears in the coalition agreements.”

Akunis feels that a referendum is an excellent solution. “Even before I was appointed deputy minister,” he says, “I placed a bill on the Knesset table: a referendum for a diplomatic agreement with the Palestinian Authority.”

Akunis adds that, nevertheless, he's still skeptical regarding this option.

And in the Likud itself? Netanyahu has an ultra-right-wing faction, of which a significant number of members have close contact with the settlers.

“The Likud is not an extreme right-wing party. It is definitely right-wing because that’s the Likud: the central bloc of the Israeli right, in all its layers. But what happened during the disengagement plan under former Prime Minister Ariel Sharon, I don’t see such a thing happening in the Likud. I don’t envision a scenario of such a unilateral act in this government. It’s already clear that the disengagement was an incorrect measure that led to rockets on Tel Aviv. Thus, a referendum is the best possible solution. It will be the first referendum in the history of the state, and the nation will have its say. There are countries in Europe that conduct referendums on much less dramatic issues than the question of future borders.”

Why do you think the public no longer shows interest in negotiations with the Palestinians?

“Because the civic discourse has become very important. There is consumer-based discourse here. People talk about two things in this Knesset: the law for equal sharing of the burden (for drafting the ultra-Orthodox) and the state budget which is, mainly, socioeconomic.

“The reason for it is the local peace and security created in recent years. I, of course, am very thankful for it. The fact that people are not afraid to go out of their houses  into the streets, made room for the socioeconomic and civic discourse. Paradoxically, it did not contribute to the Likud in the recent elections, maybe even harmed it. But better to lose several mandates, than live in an impossible security reality.”