“If the Palestinian Authority collapses, we will all regret it,” says Knesset Member Isaac Herzog, the Labor Party’s number two, in an interview with Mazal Mualem. 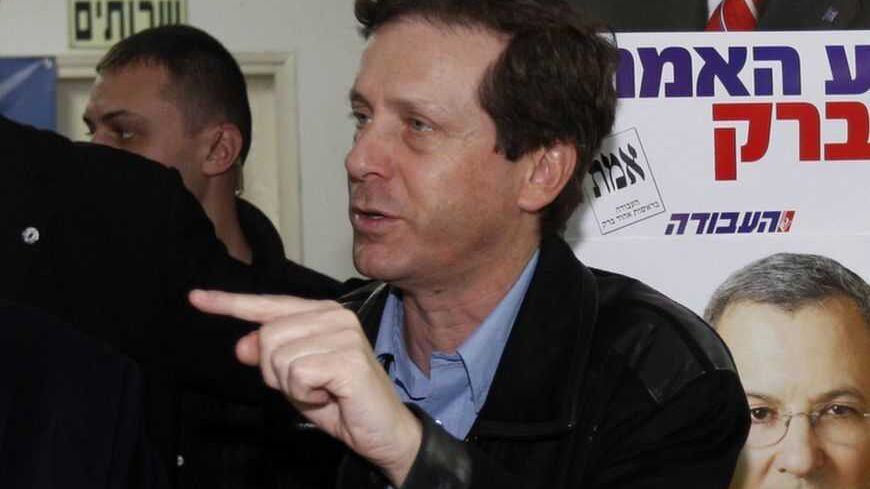 Knesset Member Isaac (Buji) Herzog, head of the Labor faction in the Knesset, is worried. Last week [February 4] he travelled to Ramallah to meet Palestinian Prime Minister Salam Fayyad. Herzog arrived at Fayyad’s chambers accompanied by a retinue of Palestinian policemen, sat with Fayyad for more than an hour, and returned with the strong sense that if negotiations with the Palestinians are not renewed in the very near future — all the sides will be sorry.

In an interview with Al-Monitor he tells us about his meeting with Fayyad and promises that the Labor Party will support the diplomatic process even from the opposition. Herzog joins the growing chorus of voices in the political system who believe that it will be very hard to reach a final-status agreement with the Palestinians in the near future, thus we should aim for an interim agreement. Some examples of politicians who share this vision, are former Foreign Minister Avigdor Liberman (who is evidently coordinated with Prime Minister Benjamin Netanyahu) and Kadima leader Shaul Mofaz.

You met last week with Salam Fayyad, and came back very concerned …

“I was the first Israeli statesman to go to Ramallah after the elections. We had a very deep conversation. We had talked for a long time about meeting. We know each other a long time. During the election campaign, it was less convenient. I assume that he wanted to exchange views and make himself heard regarding one substantive issue, before any talk regarding a diplomatic process. That issue is: the collapse of the Palestinian Authority. He told me, clearly and unequivocally, that ‘If we continue to be dependent every single month on the decision of Israel’s prime minister to free up our tax funds — we will collapse. Because we have responsibility over the territory and over people and it’s impossible to build it from hand to mouth, they suffer from great budgetary suffocation and the systems are collapsing.”

Herzog adds, “I tell everyone — the collapse of the Palestinian Authority will be a catastrophe not only to the Authority, but to the Israelis and the entire peace camp. True, the delay in payment stemmed, first and foremost, from the unilateral Palestinian move in the United Nations, but at the end of the day Israel must coolly calculate its own interests. Israel should continue to observe the Paris Protocol and transfer the funds to the Authority. This is a burning issue, even before the diplomatic process.”

Did Salam Fayyad ask you to transmit any kind of message?

“Of course. This was one of them — to sound the alarm regarding the Authority’s collapse. That was, first of all, the public message, and I also transmitted other required information to the relevant entities. But it’s not about me vis-à-vis the prime minister. The issue is immediate, in other words if you bring President Obama and talk about a process, we need to determine what kind of process is the right one to take place now."

“I would say that the major signal we’ve heard recently around Netanyahu, is to strive for an interim agreement.''

“You can’t dance the tango alone. You have to make an effort to bring the Palestinians into the room and conduct negotiations. You have to understand what is possible and what is not. The problem is that today, a dangerous disconnection exists. I really view Obama’s visit as something that will enable the two sides to begin a process of rapprochement. There will be no other choice. It is unavoidable, it is vital and that is what is expected of us in the international forum. I think that if we prepare the visit properly, the results can be another round of negotiations for the two sides.”

You were a member of Netanyahu’s second government that did not advance the diplomatic process, and you even threatened to quit because of that. Now this is the same Netanyahu.

“As part of the circumstances created in the elections, he will be forced to adopt the diplomatic process because he has no choice. Not because Netanyahu wants to — because he understands that he has no choice. Therefore he reiterated his commitment to his Bar Ilan speech [i.e., the two-state solution] at the Conference of Presidents of Major American Jewish Organizations [on Feb. 11]; that is an important statement. During the election campaign we heard nothing that approached such a statement, we only saw disregard, escape, and lack of mention of the subject in the Likud political platform.

“I also think that in anticipation of Obama’s visit, and due to the fact that at the end of the day, a return to negotiations will be unavoidable — it will be an important component of the agenda of Netanyahu’s third government."

And Netanyahu will be capable of …?

“The truth is that it is not only dependent on Bibi. The question is whether Palestinian Authority Chairman Abu Mazen will also agree — because Bibi says, “without preconditions,” and Abu Mazen is simultaneously conducting negotiations with the Hamas. In other words, we have to find the golden formulation — and it can be done — to create a joint platform for the process.

"We must strive toward a process whose cornerstone will be, at the first stage, an interim agreement. Despite the fact that I reckon that the Palestinians will not agree to a process that leaves things open without real results, and the Israelis on their part are anxious about the ability of reaching an agreement with the Palestinians of ending the conflict. Therefore, the real process I see in my mind’s eye, is something that I already proposed a year and a half ago: Israeli support for a United Nations resolution recognizing a Palestinian state and international backing, in which two things are determined: the borders and the Hague Court. The borders of the Palestinian state will be determined only by negotiations, something that preserves the principal of negotiations between the sides and does not allow for a unilateral act. That will also lower the pressure with everything connected to Israeli sanctions. And that the Palestinians will abstain from taking steps against Israel in The [international] Hague Court."

Why should the Palestinians agree to an interim agreement? After all, they are concerned that it will turn into a permanent settlement.

“The Palestinians are in danger of collapse. They are under pressure, and therefore they would want to move forward. To see movement. At the moment, Abu Mazen is also not able to make momentous decisions on the Jerusalem issue or waiving the right of return. It could be that we have here the kind of process that will move toward a realistic goal, that does not cause either side to feel it has abandoned its vision with regards to the final status agreement.”

Wait a minute, is there a chance that you will sit in the Netanyahu-Liberman government, in order to promote that process?

“The chances for that are very low.”

So you will support it from the opposition?

“We will give political support for any diplomatic process. There is no question about it.”