Netanyahu Weighs Deal Or No Deal With Palestinians

Will Israeli Prime Minister Benjamin Netanyahu initiate negotiations with the Palestinians on an interim agreement, as Mazal Mualem predicts, or, as suggested by Akiva Eldar, stick to the claim that there is no partner on the other side? 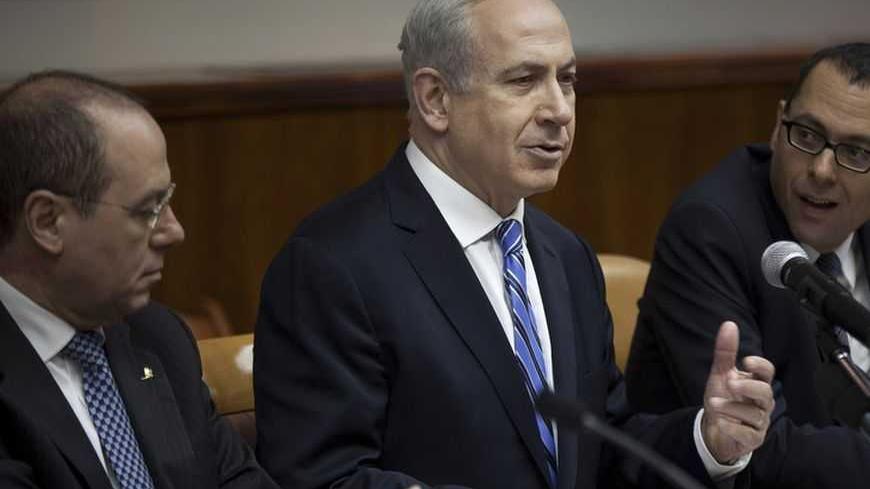 Bibi to Likud officials: Working out a plan for an interim agreement with the Palestinians

Prime Minister Benjamin Netanyahu is formulating a plan for an interim agreement with the Palestinians — that was the impression of high-level Likud officials who talked to him recently.

This was the first time in the past four years that Netanyahu, elected to a second term of office, talked expressly about an outline for a permanent agreement, after years of diplomatic stagnation.

Now — against the background of President Barack Obama’s anticipated visit, and the complex coalition negotiations being conducted by Netanyahu — the prime minister actively expresses readiness for diplomatic activism. No more stagnation, no more focus on halting Iranian nuclearization — but a declaration of intent to take the initiative in renewing negotiations with the Palestinians.

According to high-level Likud officials, in their conversations with Netanyahu he really appears to want to jump-start diplomatic negotiations with Palestinian Authority Chairman Abu Mazen in an attempt to bring about a long-term interim agreement. This, he feels, is because a final status settlement is not achievable in the coming years.

Does this signal a real turnabout on Netanyahu’s part, as he faces his third term of office as prime minister, or is it the result of diplomatic calculations that force him to display diplomatic activism to improve his recalcitrant image?

It is hard to answer this question at this point in time, although Netanyahu clearly understands that if he wants Hatenua party Chairwoman Tzipi Livni in his government, he will have to grant her a diplomatic channel with the Palestinians, because that was her main campaign banner. But not only for Livni. Yesh Atid leader Yair Lapid also stipulated coalition negotiations on fulfilling his demand to set a time schedule for renewing the diplomatic process.

Netanyahu cannot ensure diplomatic negotiations with Abu Mazen for achieving a final status agreement, even assuming he wanted to. The simple reason for this, is that he does not believe in it. On the other hand, he also realizes that he cannot consign the diplomatic process to a standstill for another four years. Circumstances have changed, and it will be hard for him to ask for American support in the struggle against Iranian nuclear plans while the peace process is stuck.

Therefore, the solution could come in the form of an interim agreement that will sideline the most severe disputes: Jerusalem, and the right of return. On the other hand, it would enable Netanyahu to show that he is not the guilty party should the Palestinians refuse the talks.

Netanyahu’s talk about an interim agreement conforms to statements made by No. 2 in Likud-Beiteinu, former Foreign Minister Avigdor Liberman, regarding management of the conflict.

Interim-agreement negotiations would also not harm Netanyahu’s chances for bringing other right wing parties into the coalition. Interim-agreement negotiations is something that the ultra-Orthodox Sephardic party Shas, and even Naftali Bennett’s Nationalist party, HaBayit HaYehudi, can live with. Shas sat in former Prime Minister Ehud Olmert’s government while the Annapolis talks for a permanent settlement were held in 2007, so they would not be deterred to sit in a government that “manages the conflict” via talks for an interim agreement.

In summary, we can say that even if Netanyahu is forced into a diplomatic corner due to diplomatic circumstances, and under the assumption that he will, in fact, present a diplomatic initiative in the near future — that is a lot more than we have seen for four years.

Netanyahu behind closed doors: “A peace agreement with the Palestinians is not achievable”

“A peace agreement with the Palestinians is not achievable” — that is what Israel’s Prime Minister Benjamin Netanyahu told Meretz Chairperson Zehava Gal-On, in a dialogue they conducted at the end of last week [Feb. 7]. This meeting was one of many that are being held by Netanyahu with the heads of the Knesset diplomatic factions, in order to assemble a coalition.

Gal-On revealed the details of her conversation with Netanyahu at a memorial assembly for Peace Now activist Emil Grunzweig, who was murdered thirty years ago by the blast of a grenade hurled by a Jewish right-wing activist at a left-wing demonstration in Jerusalem. According to Gal-On, Netanyahu explained to her during their meeting that a [final-status] agreement is not possible due to the issues of the settlement [blocs] and the division of Jerusalem. These two issues are necessary for any permanent-status arrangement with the Palestinian side.

Gal-On added that her impression of the conversation is, that while Netanyahu is willing to open negotiations, he himself does not believe that an overall agreement is achievable.

Later on, Gal-On told Al-Monitor that Netanyahu did not address her proposal to welcome the Arab Peace Initiative that still waits on the diplomatic table, and was even praised recently [Feb. 6] in a statement made by the Saudi Crown Prince Salman bin Abdulaziz.

The Meretz chairperson said that she does not see chances for forming a “peace coalition” with Naftali Bennett, Avigdor Liberman and the current composition of the Likud faction. “We are talking about an imaginary peace process,” she said, and added that she emphasized to Netanyahu that although Meretz will sit in the opposition, it will not oppose peace efforts or steps taken to promote social justice.

Netanyahu’s words complement recent statements made by former foreign minister Avigdor Liberman, according to which there is no permanent solution to the Israeli-Palestinian conflict. All that remains is to “manage the conflict” and reach a long-term interim solution.

Netanyahu’s views, as cited by Gal-On, raise questions regarding his chances of coming to an understanding with Tzipi Livni in the diplomatic sphere.

These views are also unacceptable to the American administration, and are likely to cast a long shadow on President Obama’s visit to the region next month. This is because (according to many people) the timing of the visit signals the great importance attributed by the United States to the diplomatic process and the formation of the next coalition that will be established to deal with this process.

As already published, the Forum of Eight [senior Israeli ministers] made a commitment at the end of 2011 before the Quartet (the United States, the EU, Russia and the UN) to present its position regarding final-status borders and security arrangements within three months. Meanwhile, no discussion on the subject has been held to this very day.

Al Monitor requested a reaction from the Prime Minister's office concerning Gal-On's statements, but did not receive any by the time this article was submitted.